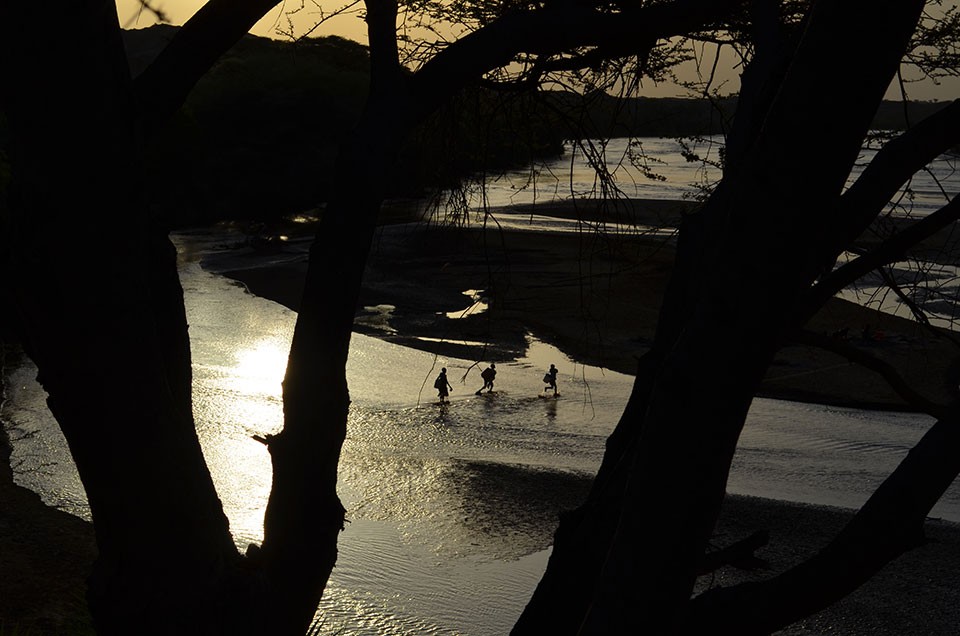 Northwest Kenya's Turkwel River runs through ancient lands where many key fossils and artifacts left by early humans have come to light. The region is now inhabited by the Turkana people. Near sunset, three boys frolic on their way to fetch water. 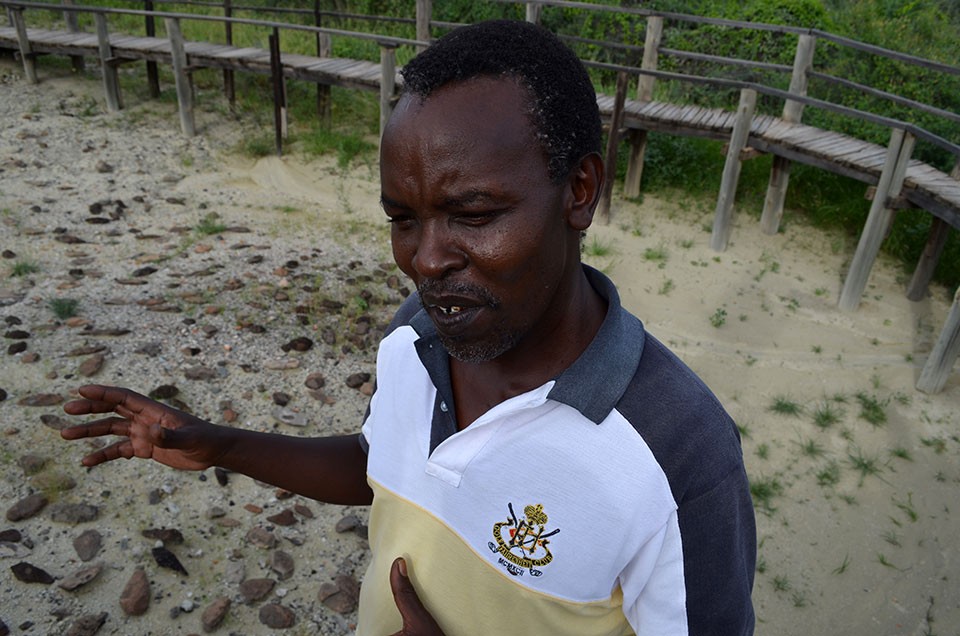 Further south, at a site called Olorgesalie, professional fossil hunter Bonface Kimeu visits some of thousands of stone axes left by proto-humans who lived here 500,000 to 1 million years ago. Bonface's father, Kamoya Kimeu, has found many of the wor 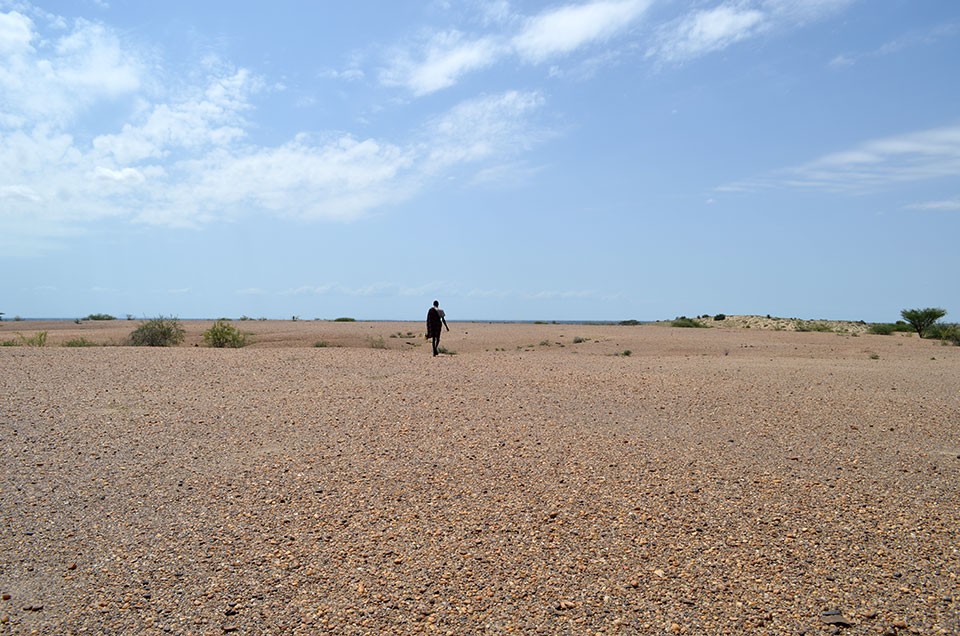 The Turkana region once had a climate hospitable for humans and their ancestors; now it is brutally hot and dry. Here, a local man crosses what was a lakebed as little as 5,000 years ago. The present-day Turkana people survive mainly by herding goat 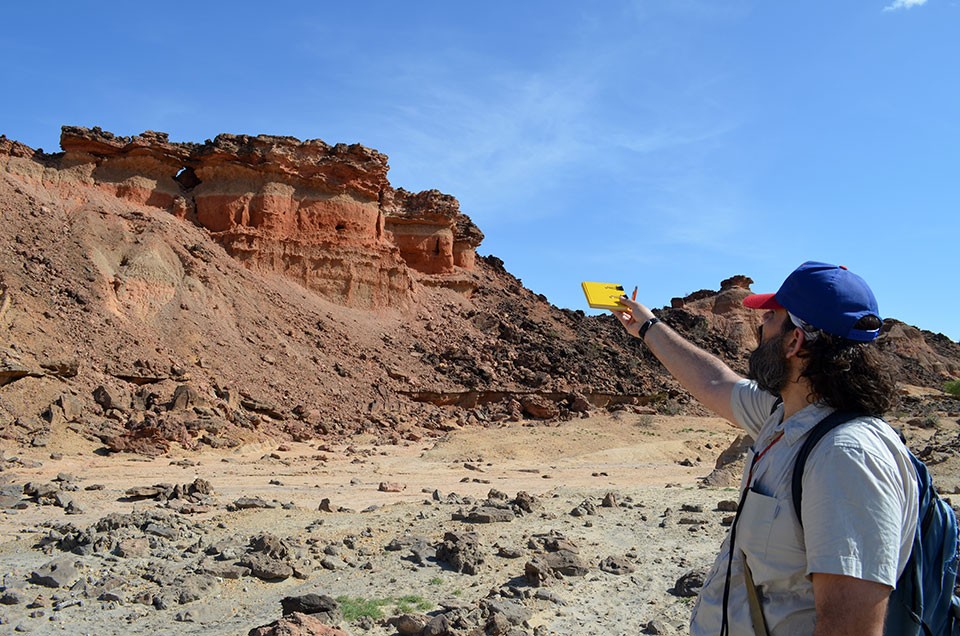 Near the Turkwel River, Lamont-Doherty geologist Christopher Lepre surveys layers of rocks and sediments dating back about 3.6 million years. In many places, wind, water and tectonic forces have shredded the surface into badlands, exposing many seque 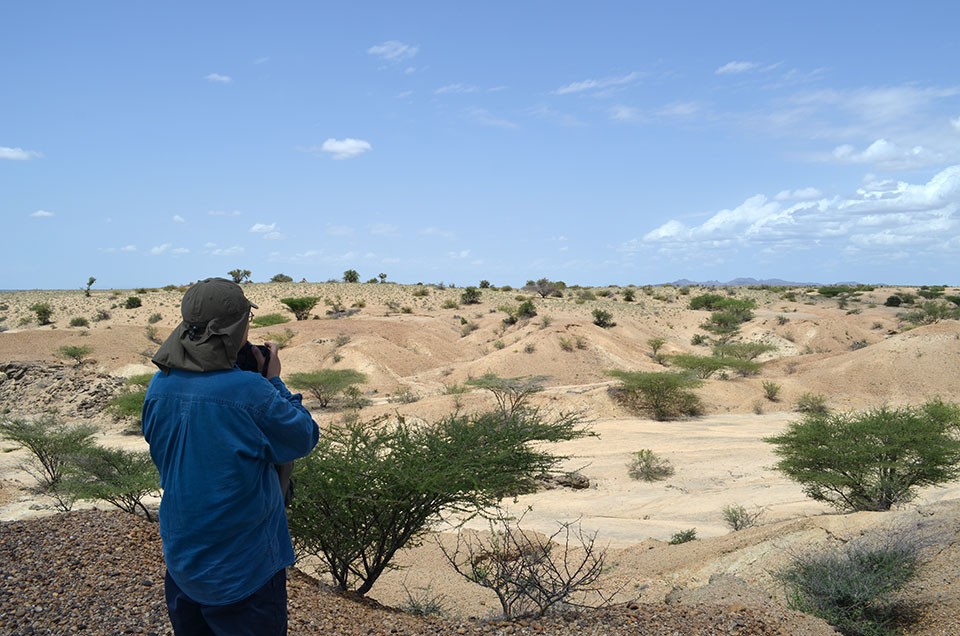 Lamont-Doherty geochemist Tanzhuo Liu inspects eroding sediments left by a long-gone lakebed. Off near the horizon, what was probably once an island where thousands of years ago people erected stone monoliths and harpooned fish. 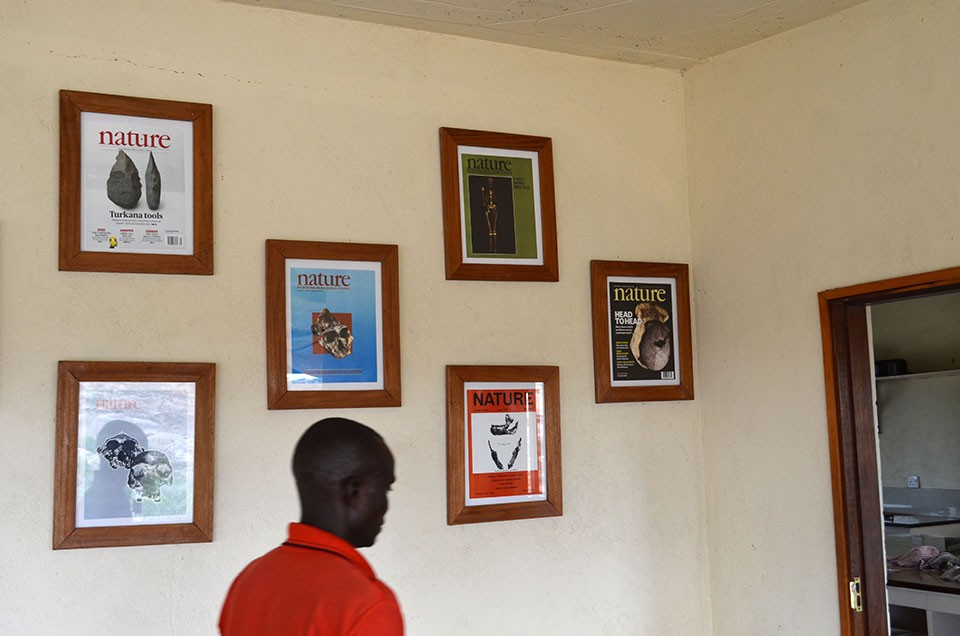 Most research in the remote region is based out of the Turkana Basin Institute, which provides facilities for scientists. A wall at the institute documents the stream of major discoveries coming out of here. 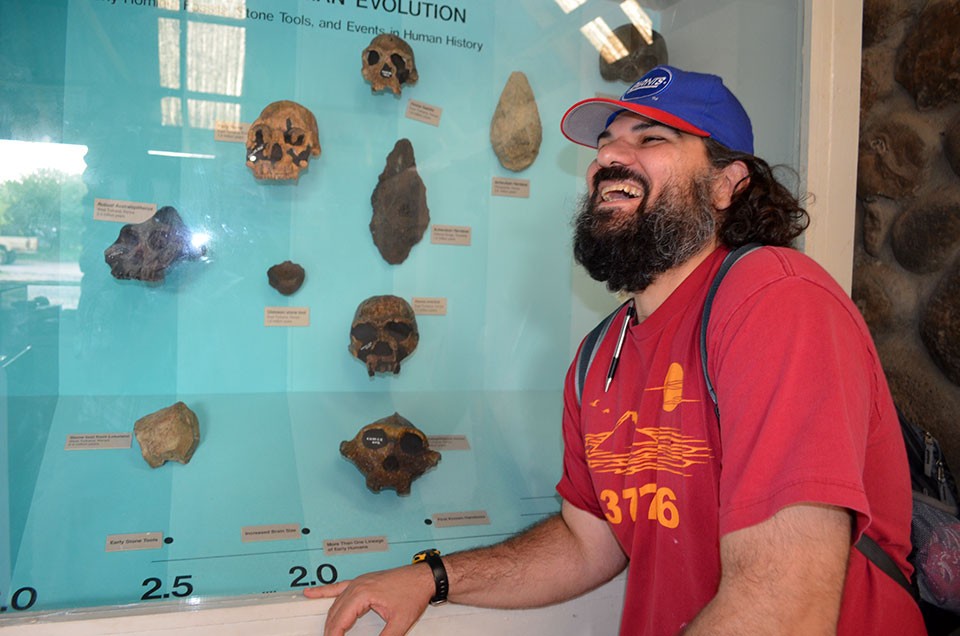 Until 2015, the stone tool displayed at lower left was considered the world's oldest, at 2.6 million years. (Actually it is a replica from a set.) Then Lepre and colleagues at Stony Brook University dated a set of tools from the Turkana region to 3.3 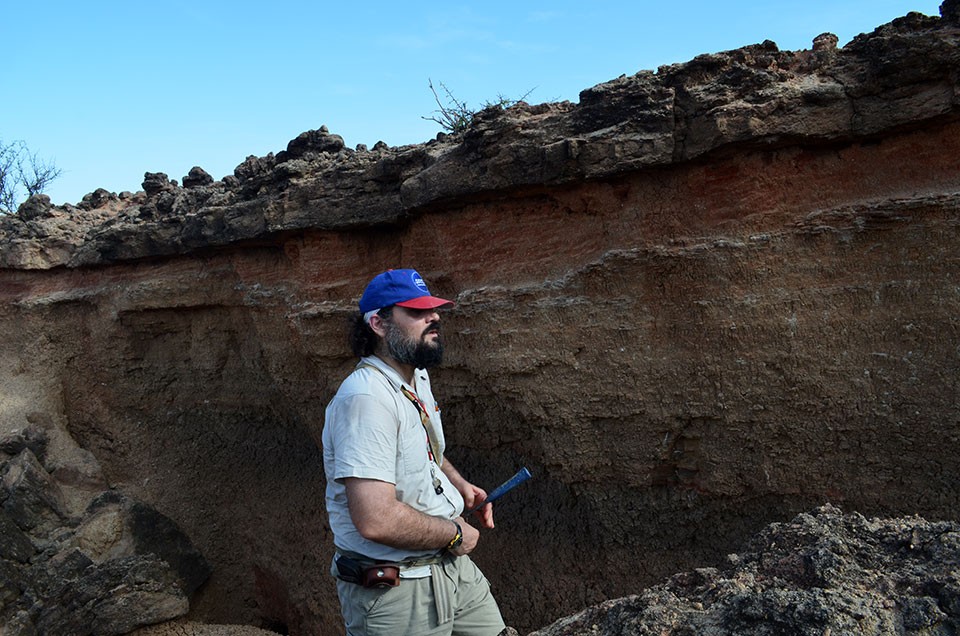 Lepre prepares to sample an outcrop of ancient sediments. He establishes the ages of objects found within or near layers using magnetostratigraphy--the study of how earth's magnetic field periodically reverses itself. Changes in polarity can be ident 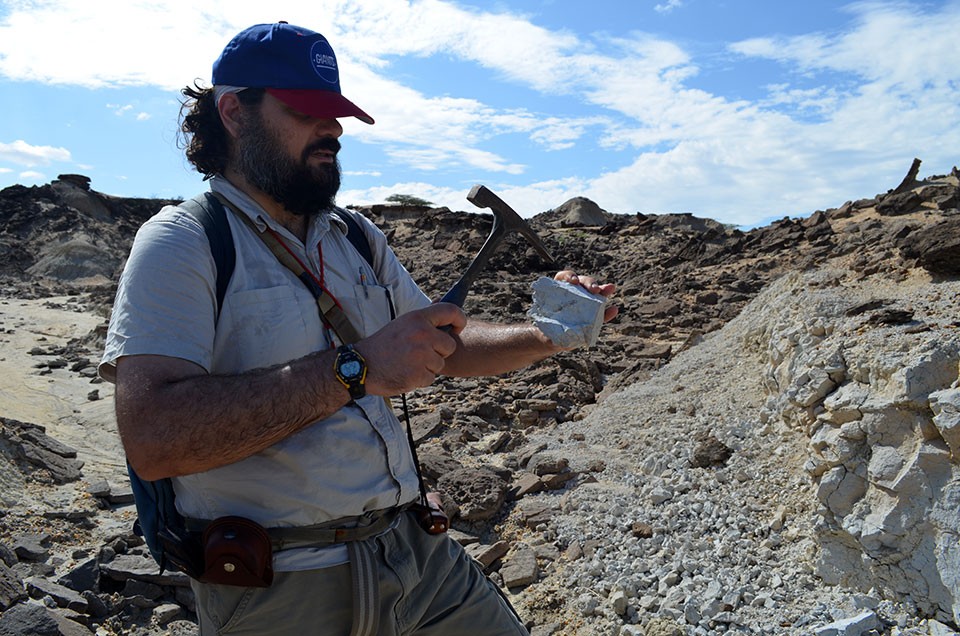 A whitish layer of compacted volcanic ash, or tuff, runs through one section. As Africa slowly tears apart along the seam of the rift valley, volcanic eruptions are commonly generated. 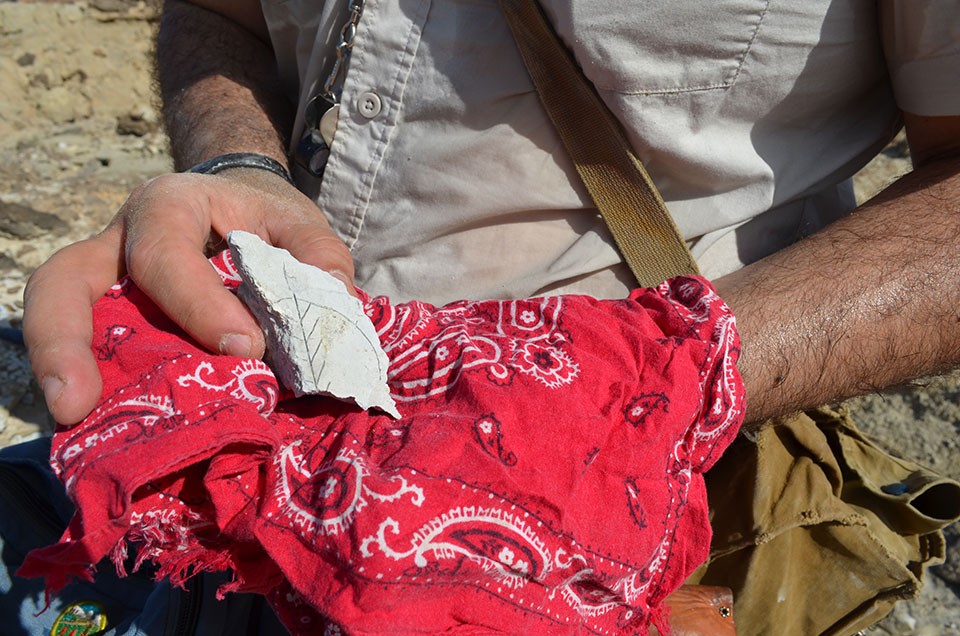 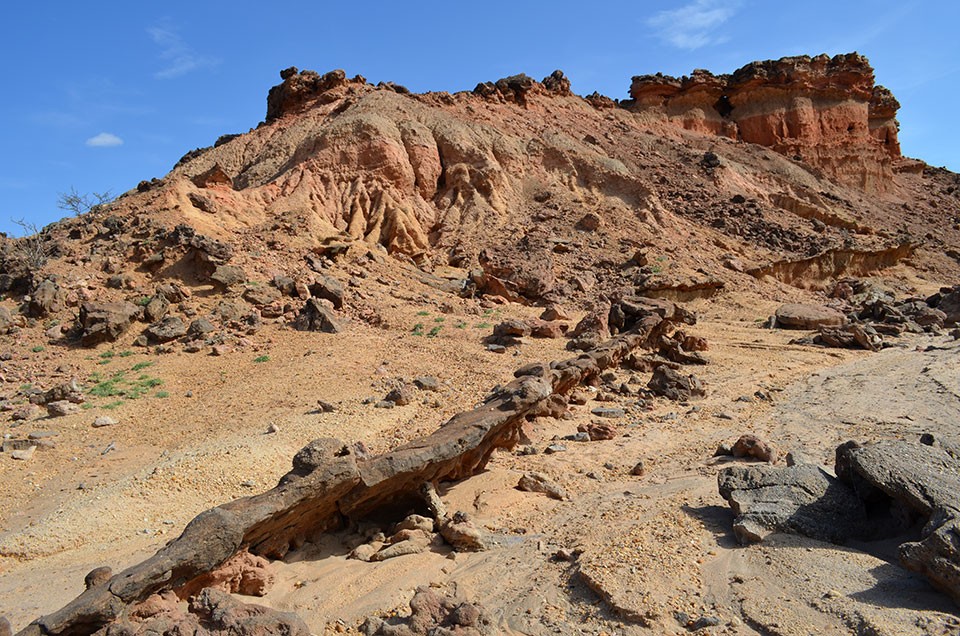 Earthquakes are also frequent, as evidenced by this erosion-resistant old fault snaking though the landscape. Faults tend to confuse the chronological picture, because they thrust up some sections of land while dropping others down, putting layers ou 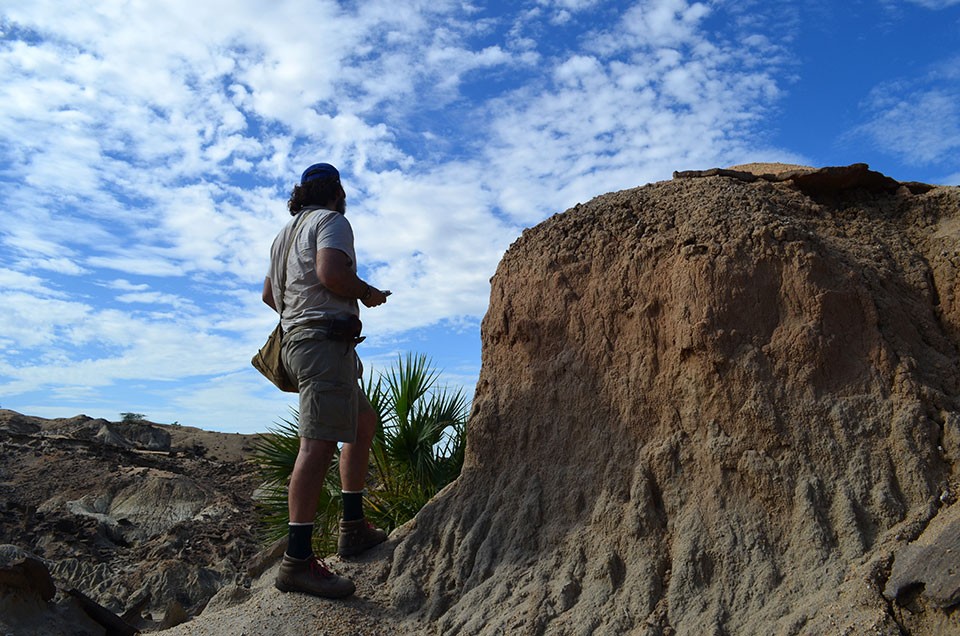 Lepre scrambles to a high point to survey the area. Getting reliable dates means taking dozens of samples, from top to bottom. 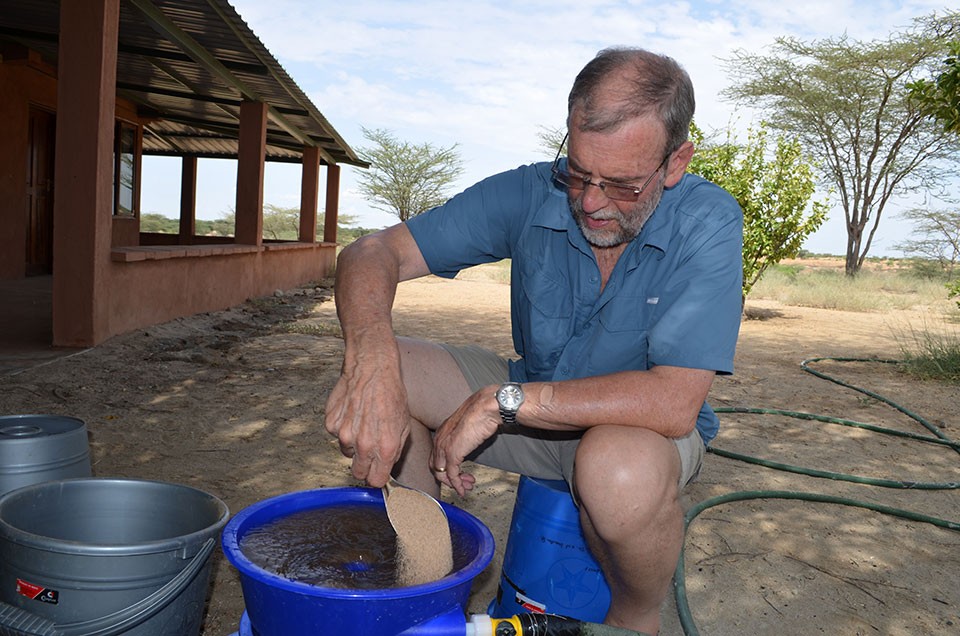 Measuring radioactive decay of certain minerals is another way to date rocks. Back at the research station, geologist Andrew Gleadow of Australia's University of Melbourne pans out heavy grains used for such analyses. A model skeleton of our own species, Homo sapiens, is used at the research station for teaching comparative anatomy to visiting students. 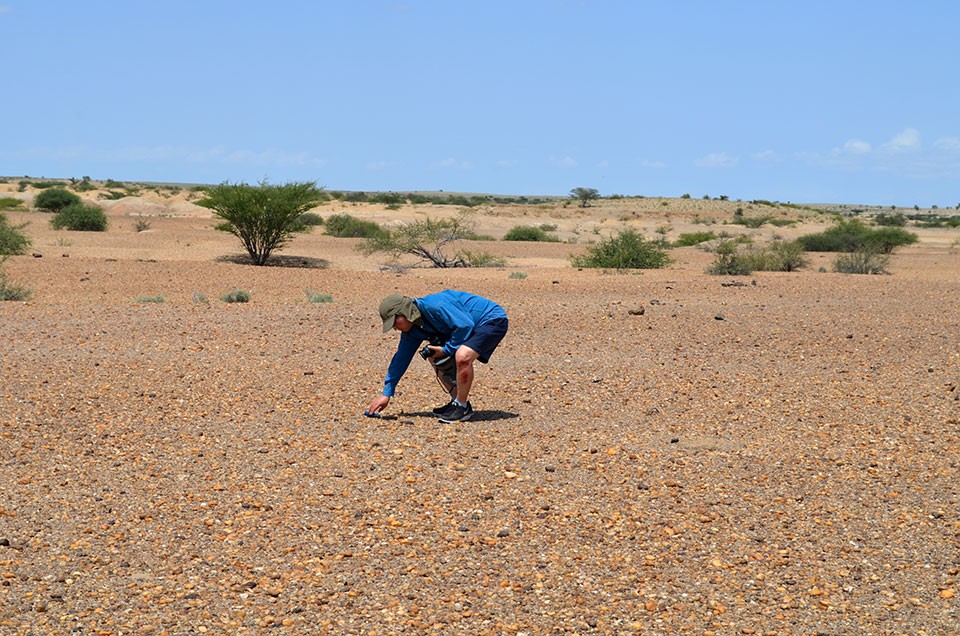 Liu is charting past lake levels using desert varnishes--thin coatings on rocks whose compositions reflect moisture levels at the time they were deposited. Here, he hunts specimens that may have lain undisturbed for millennia. 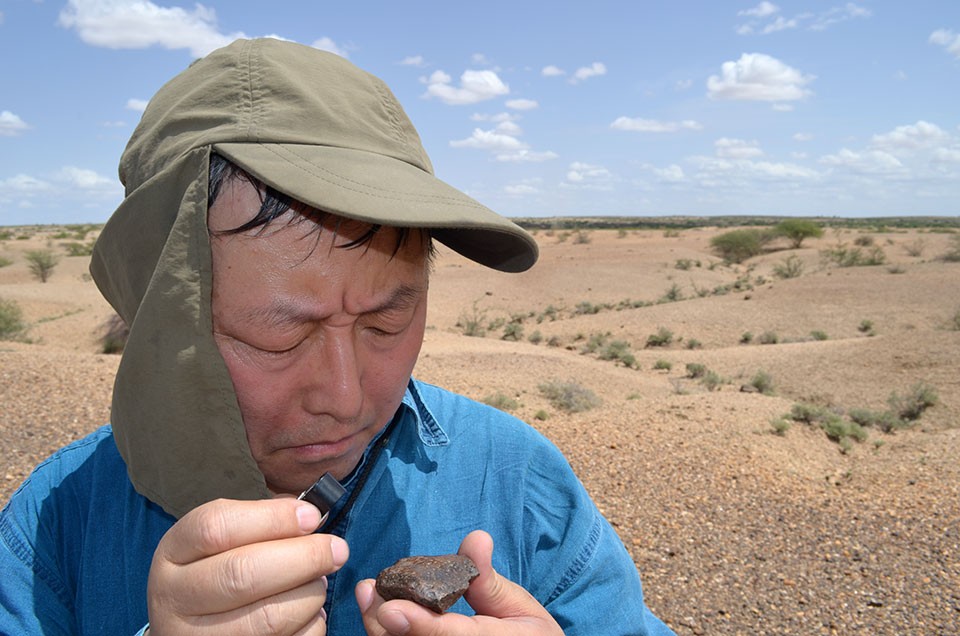 This rock has a nice varnish coating, "Look at this specimen--it's beautiful!" says Liu. 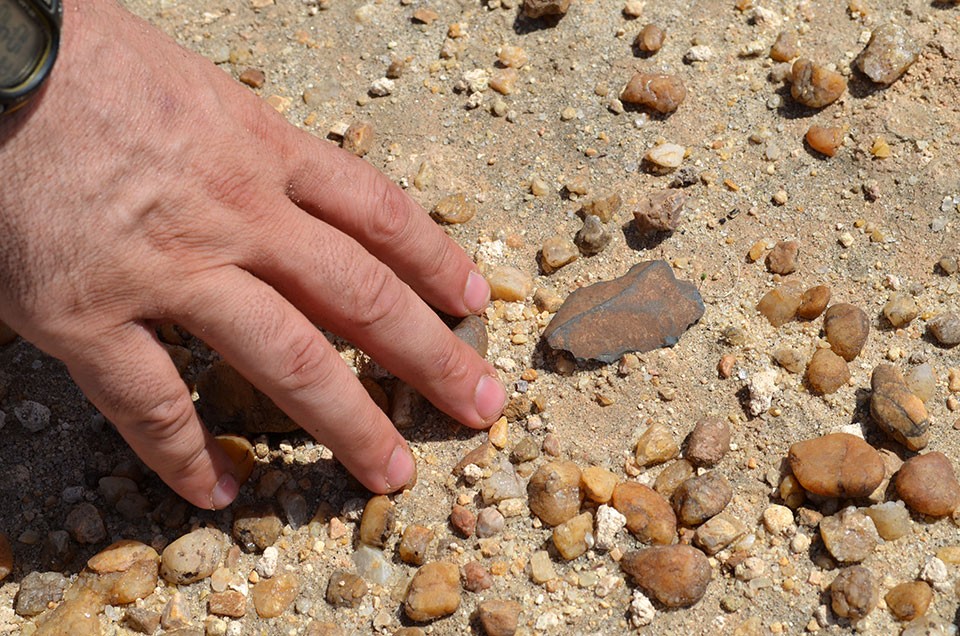 Remains of the past are everywhere. By chance, the researchers spot a projectile point--maker and age unknown. They are careful to leave it in place; such artifacts are the province of archaeologists. 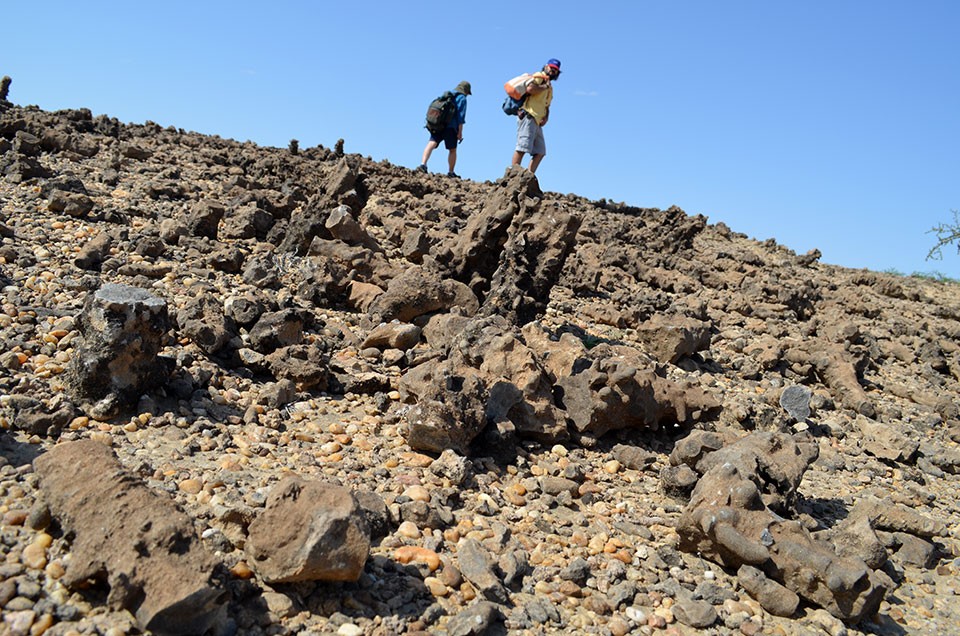 The petrified roots of a onetime forest, from wetter times during the Pliocene, which started 5.3 million years ago. The soil and trees that grew above them are long gone, eroded away by time. 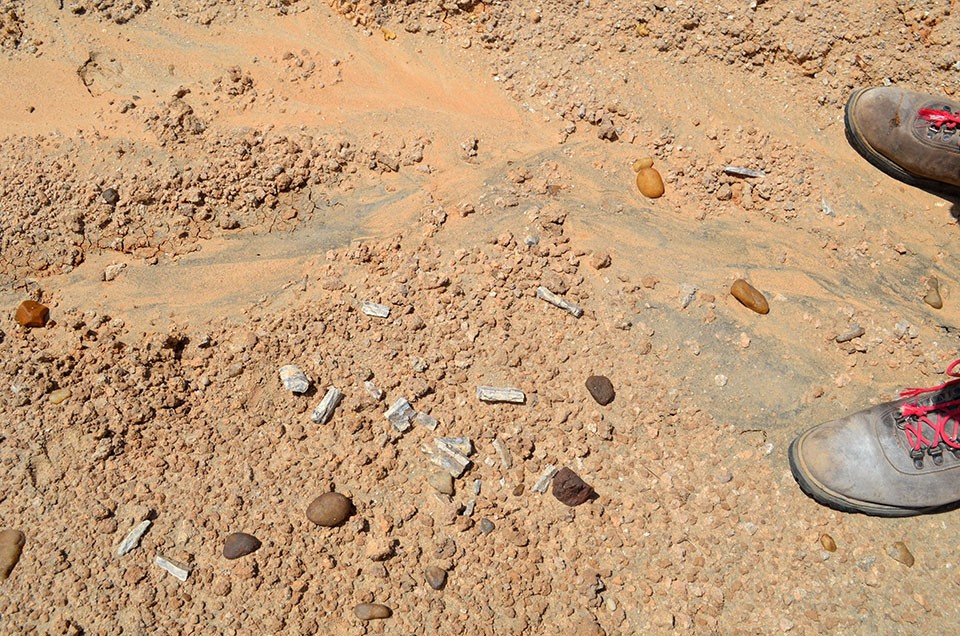 Fossilized animal bones--possibly ancestors of modern antelopes or pigs--bleed from a seasonal riverbed. Nearby, in the 1990s, anthropologists found bone fragments of a distant human relative who lived around 3.5 million years ago, and may have hunte 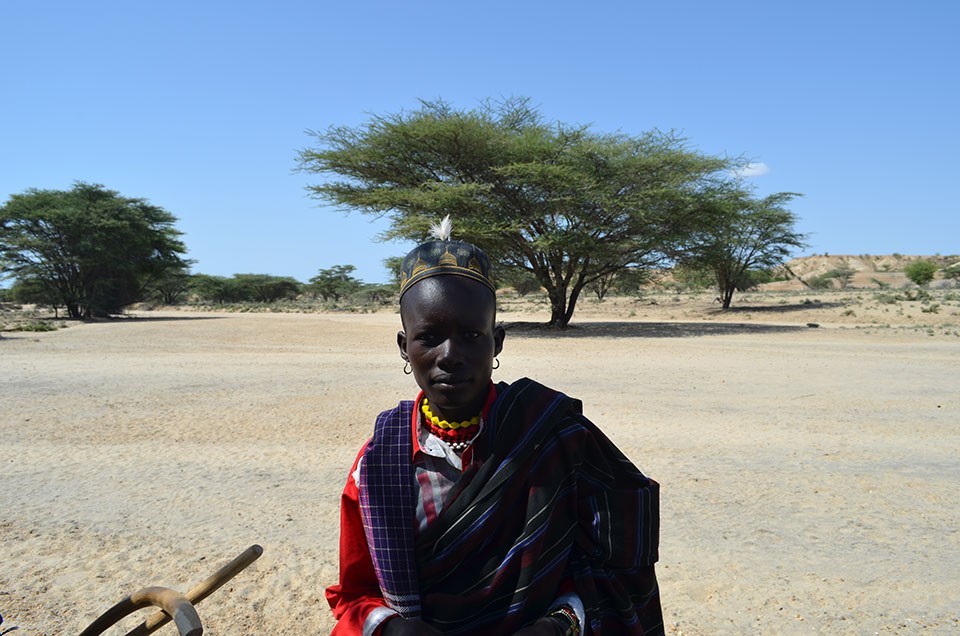 A Turkana herder stops by. Many Turkana remain deeply traditional, retaining their own language, religion and clothing. 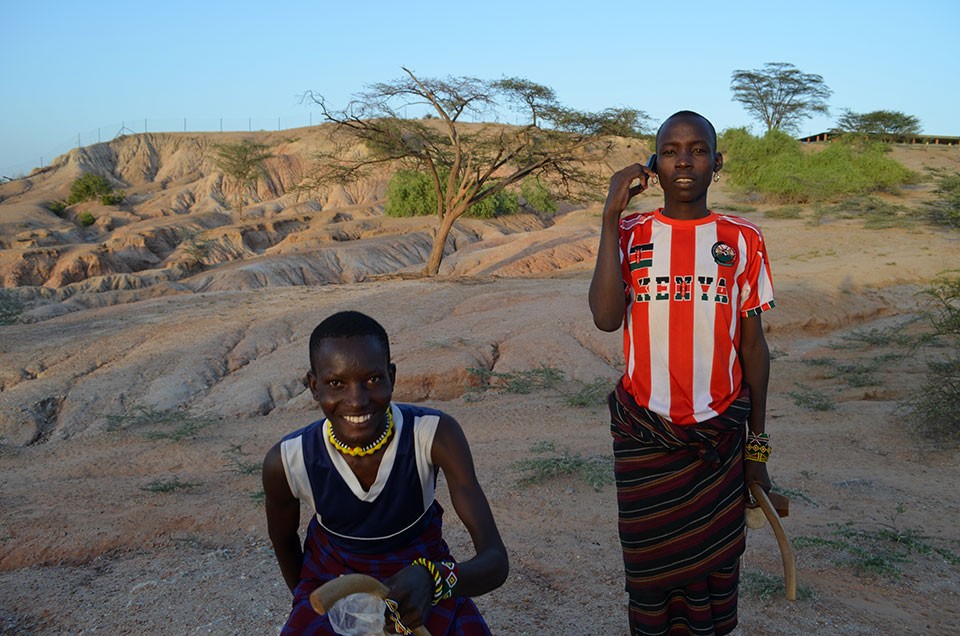 Turkana teens each carry the traditional curved stick and portable stool used for long hours of goat herding in the bush. But Kenya is modernizing fast; they also have a cell phone. 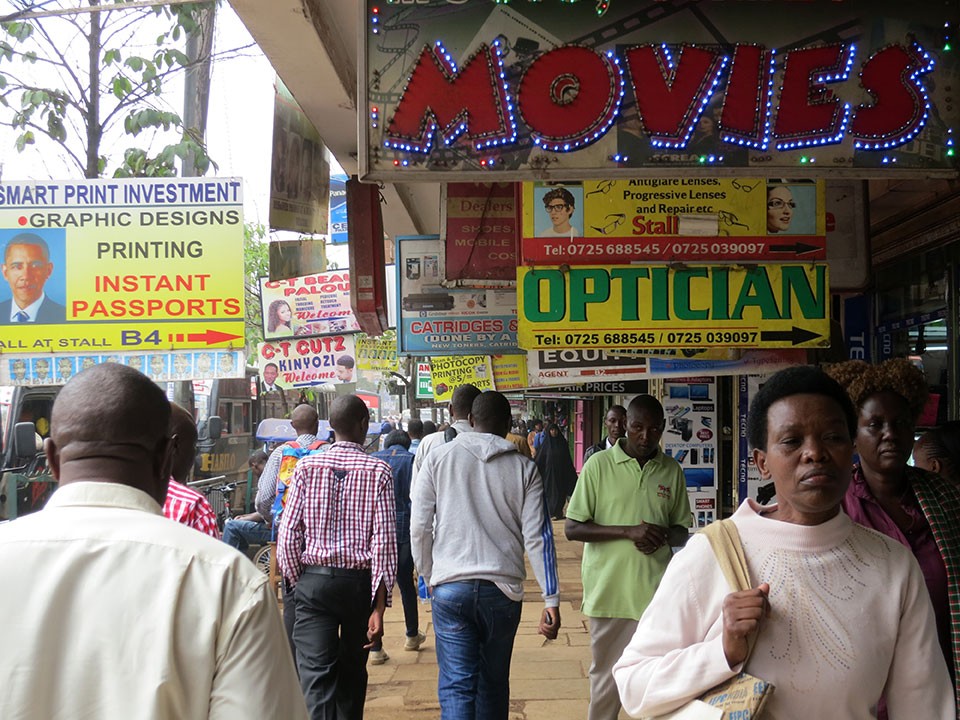 The diverse hustle of Nairobi, Kenya's capital, is drawing people from many rural areas. Rapid urbanization is a global phenomenon; for the first time ever, more than half of people live in cities--a momentous step in human migration. 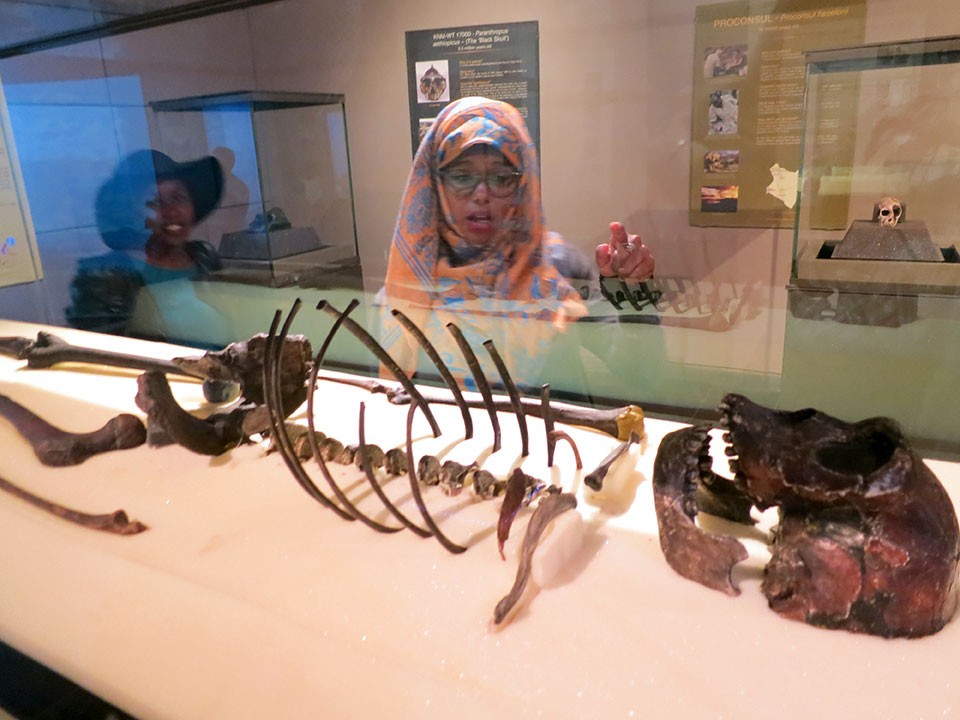 At Nairobi's Kenya National Museum, two Homo sapiens visit the Homo erectus known as Turkana Boy. Continuing discoveries in evolution serve as powerful reminders that all humans come from, and remain, one family.

East Africa’s rift valley is considered by many to be the cradle of humanity. In the Turkana region ofÂ northwest Kenya, researchers Christopher Lepre and Tanzhuo Liu of Columbia University’s Lamont-Doherty Earth Observatory are cooperating with colleagues to study questions of human evolution,Â from the creation of the earliest stone tools toÂ climate swings thatÂ have affected developing civilizations. Startling new discoveries areÂ coming from this regionÂ at a rapid pace. Here are images fromÂ a recent field expedition. READ THE FULL SCIENTIFIC STORY or WATCH A VIDEO