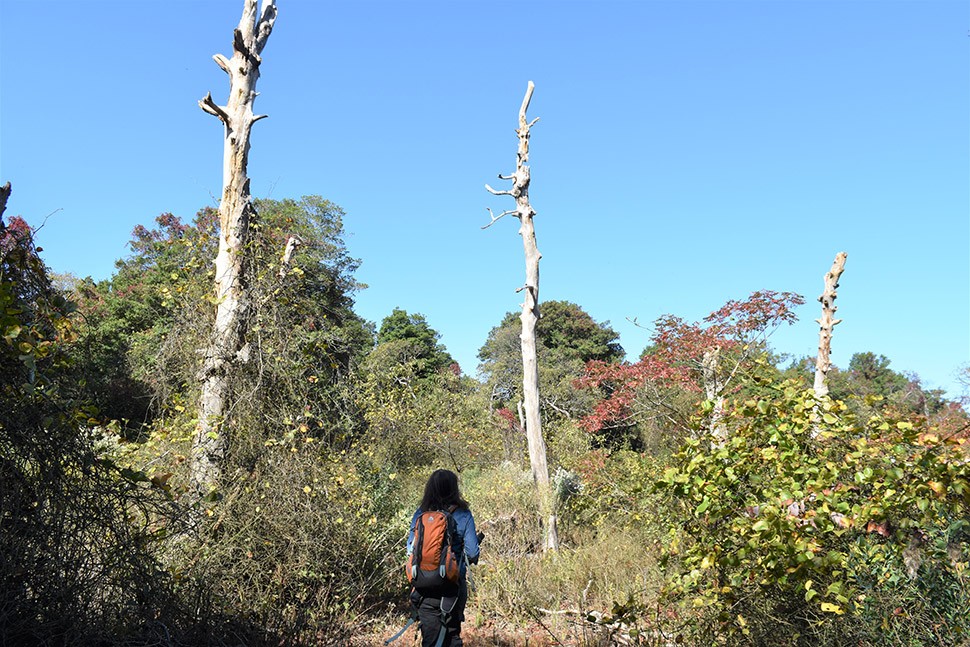 A 65-acre patch of old-growth hollies and red cedars has survived on Sandy Hook, long protected by the peninsula's status as a military base. It has now been converted to parkland. In a low-lying spot, tree-ring researcher Nicole Davi regards the hul

Davi forces a specialized augur into a red cedar; the bit is hollow, allowing her to core a cross section of growth rings without harming the tree.

The researchers prepare to shed their backpacks in a stand of holly trees.

A raw core. Polished and put under a microscope, it will reveal past growth patterns, possibly including storms that predate the modern meteorological record.

DaSilva saws out a full cross section from an already downed tree.

Cross sections like this one, from a red cedar, provide an easily visible index for analyzing cores.

Davi admires the remains of an ancient forest inhabitant.

Saltwater intrusion from storms and ongoing sea level rise appears to be killing off waterfront trees. Across the bay is the highly developed New Jersey mainland shore.

Hundreds of feet inland, a tire washed in during a storm or extreme high tide is a sign of continuing seawater encroachment.

The peninsula is full of reminders of its military past. Just a few hundred feet from the old-growth forest, a decommissioned Nike anti-aircraft missile sits near a collapsing building.

Much of the rest of the military infrastructure is slowly decaying. Many current and former military bases, protected from civilian development, serve as de facto nature preserves.

Near the tip of the peninsula, a couple of trees hang on amid marshland. Beyond: the Verrazano Narrows bridge, and the New York skyline. The city, like the Sandy Hook forest, faces the twin threats of sea level rise and future storms.