Getting Hands-On with Science at Lamont: Open House 2016

By that measure and by the smiles on faces, LamontÂ had a lot of very happy learners on Saturday as the Earth Observatory, Columbia University’s home for Earth science research,Â invited the public to campus for a day of hands-on science experiments, demonstrations, and conversations with some of the world's leading scientists in the Earth, environmental, and climate sciences.

Three thousand visitors toured theÂ labs and crowded around demonstrations, often jumping in to help, as you’ll see in the photo slideshow below. They simulated volcanic eruptions, listened to earthquakes, and examined tiny fossils through microscopes in the Core Repository. The Dyhrman Lab brought out a rainbow of microscopic phytoplankton and explained why, when you take a breath, you should thank an oxygen-producing phytoplankton. Spiegelman used a bathtub filled with a cornstarch concoction to show how rocks inside the Earth could behave as both liquid and solid, viscous and brittle. (Watch his demo in the video above.)

Scientists also led geology tours on campus and a dendro eco-hike to explore Lamont's forest history through tree-ring analysis. And they led a series of talks about the latest research on topics including extreme weather, the planet’sÂ changing ice, and earthquakes (links toÂ watch thoseÂ talksÂ are below). 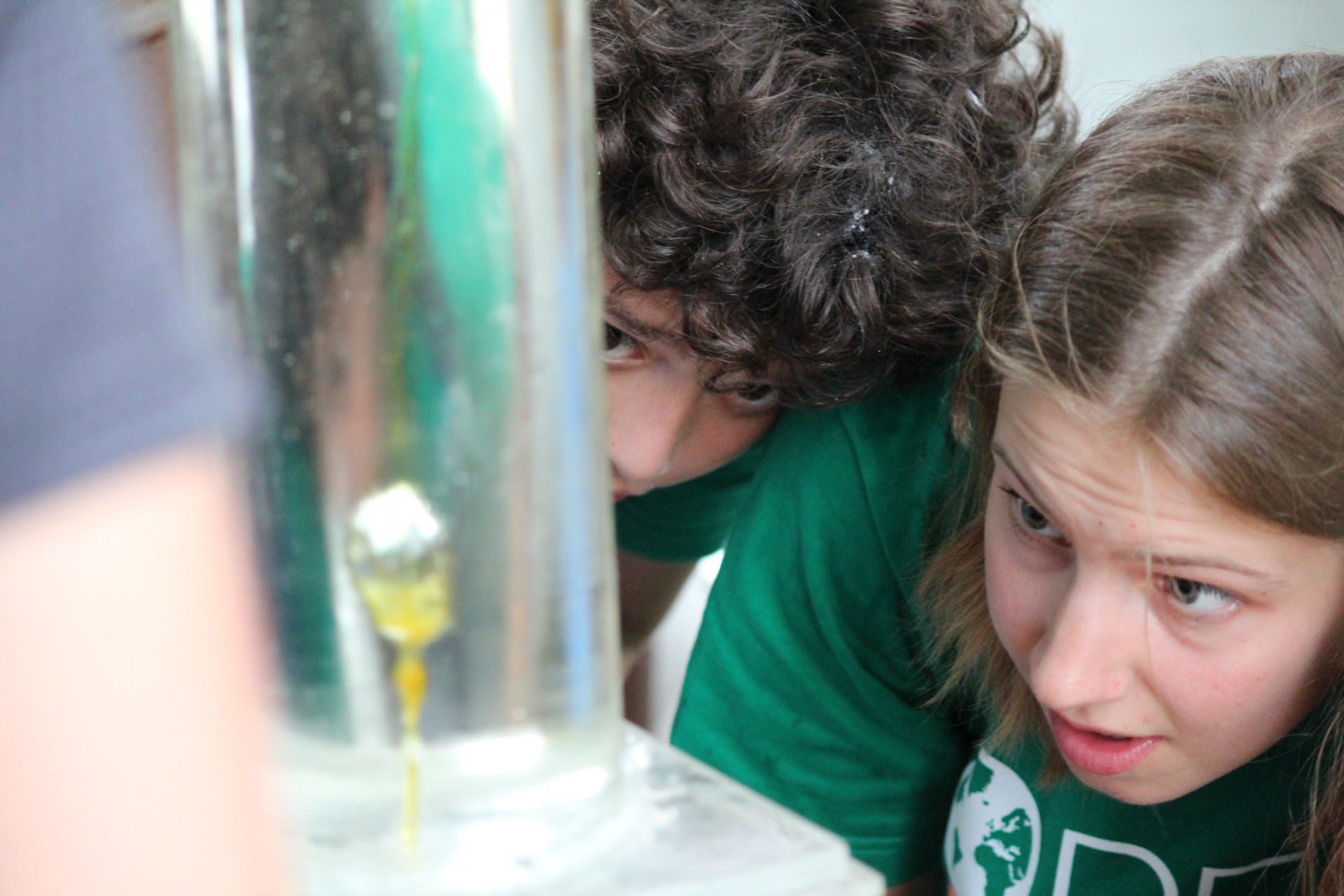 The Lamont-Doherty Earth Observatory campus was packed for Open House 2016 with science fans of all ages. Augie Davi-Fiondella and Anna Barth watch a simulation of a plume rising through the Earth's mantle. 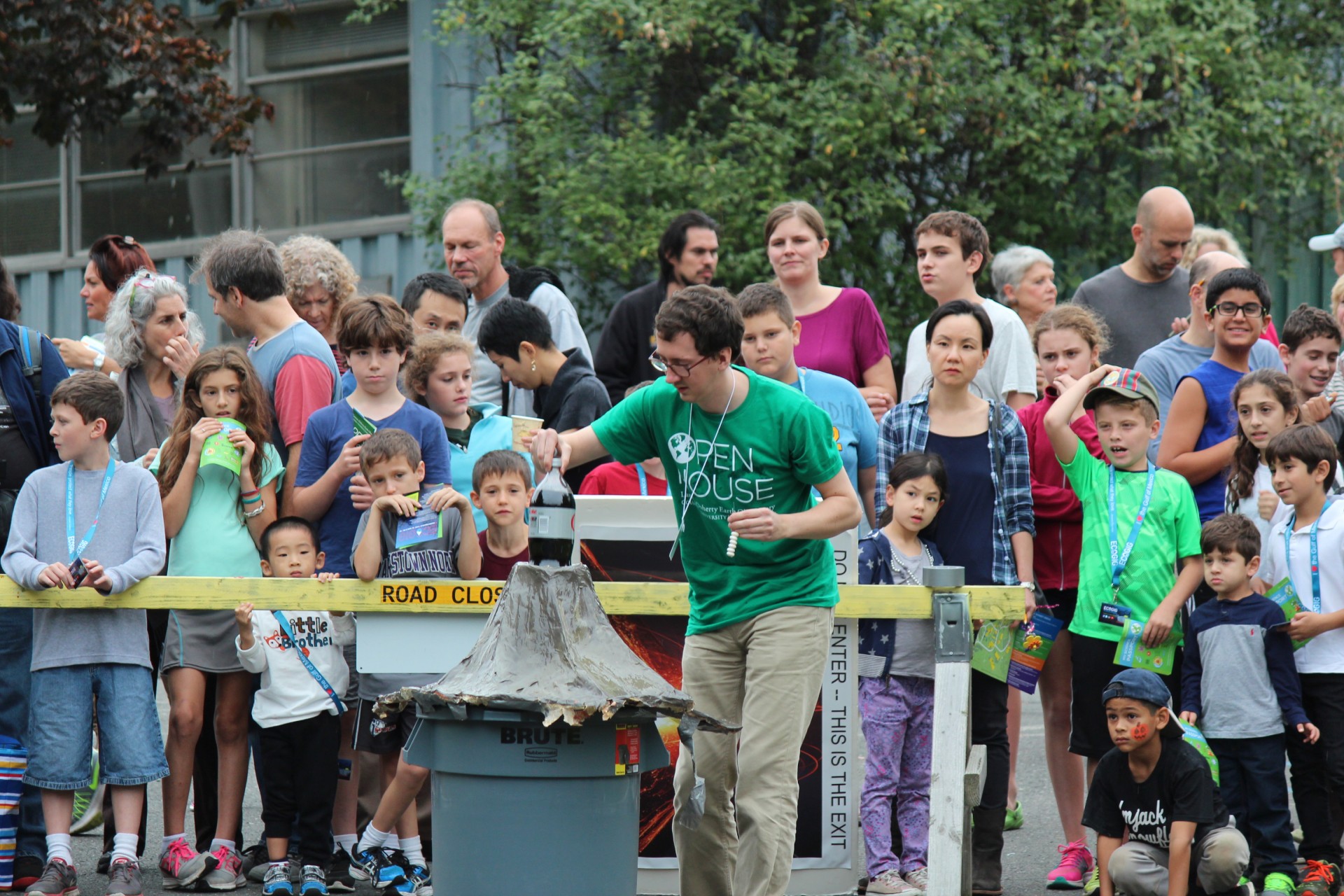 Grad student Daniel Rasmussen drew a big crowd for the volcano simulations. This one is a concoction of Mentos and Diet Coke. 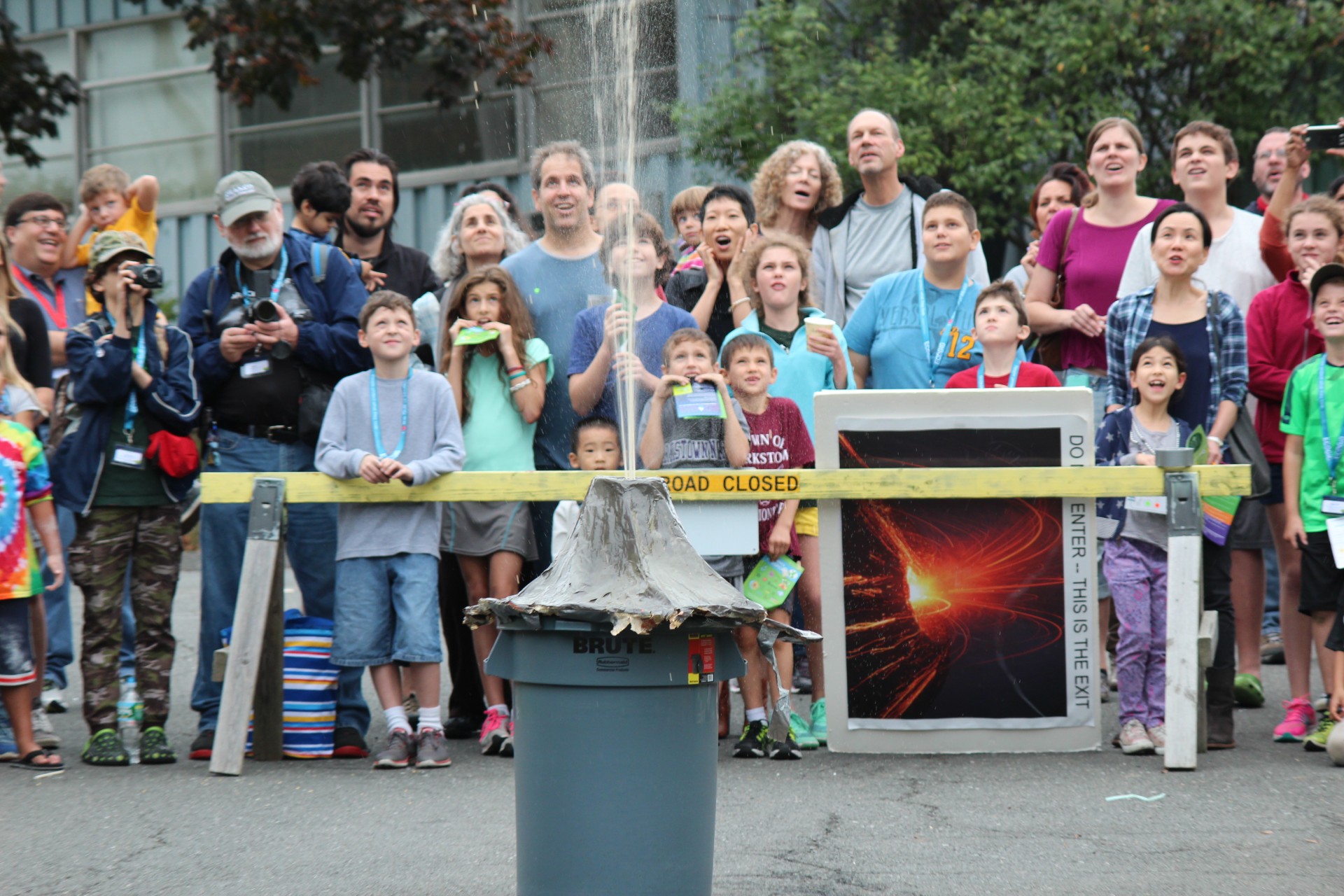 And the result of mixing Mentos and Coke in a volcano demo ... 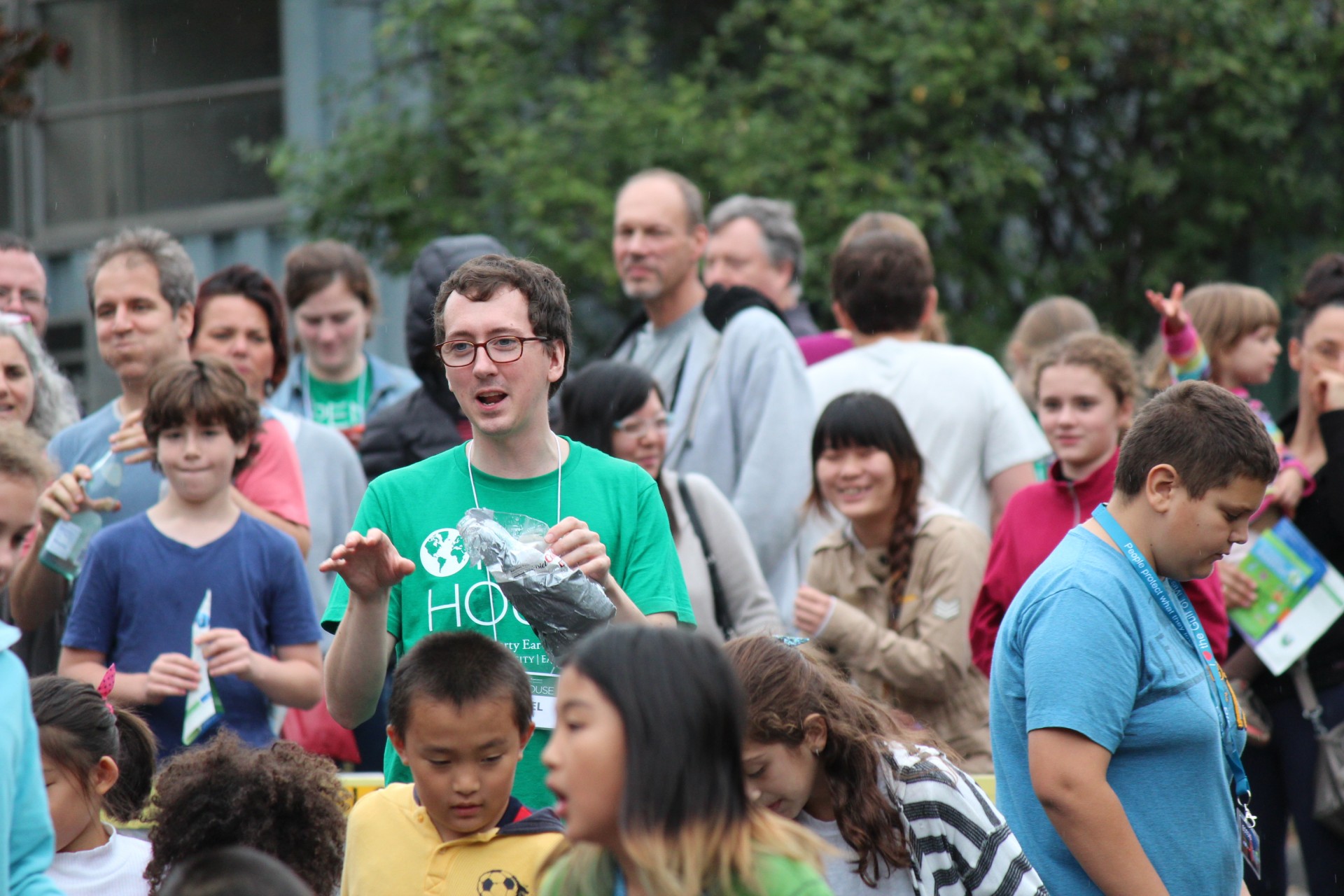 Daniel holds what was left of the Coke bottle after the Coke-and-Mentos eruption. 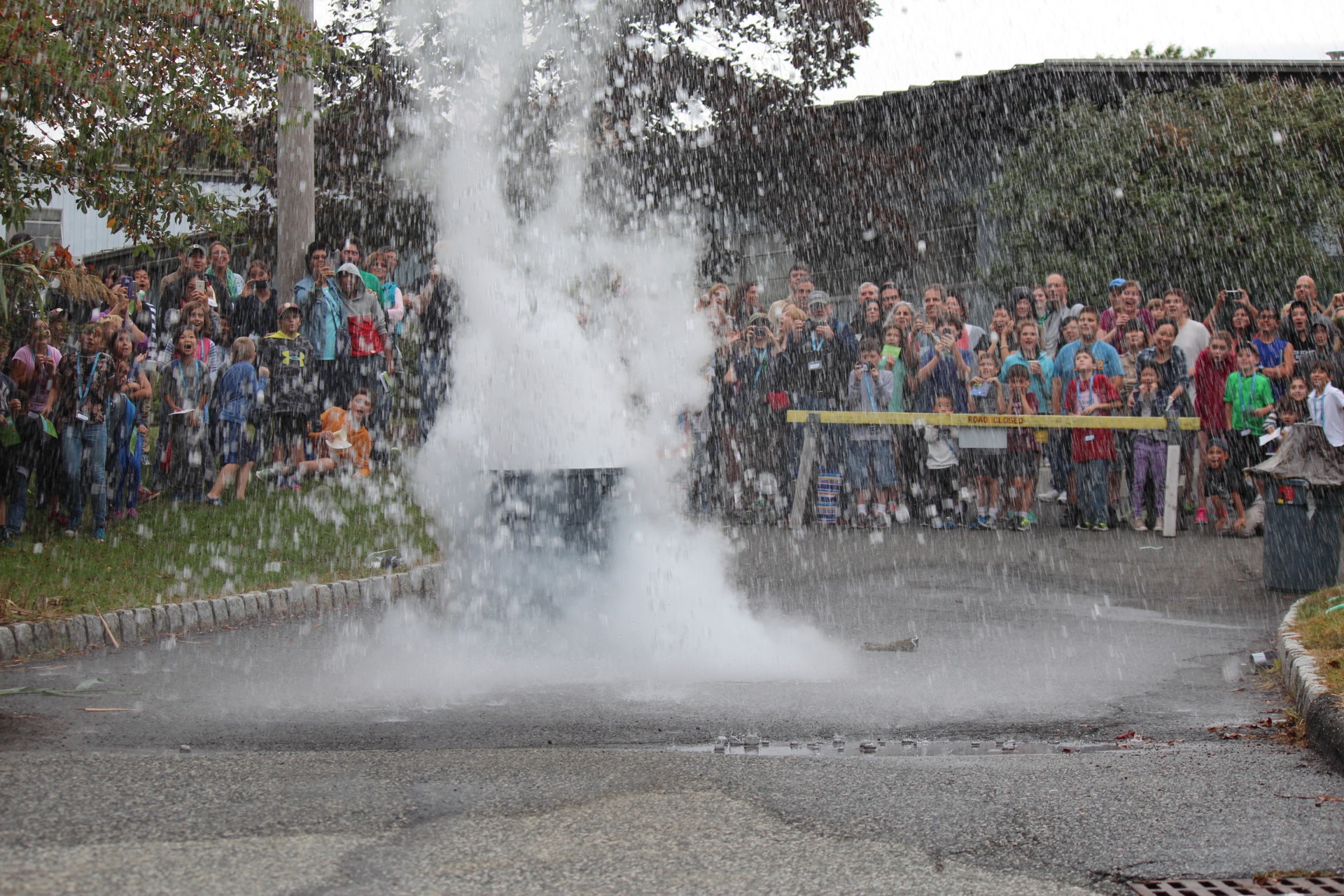 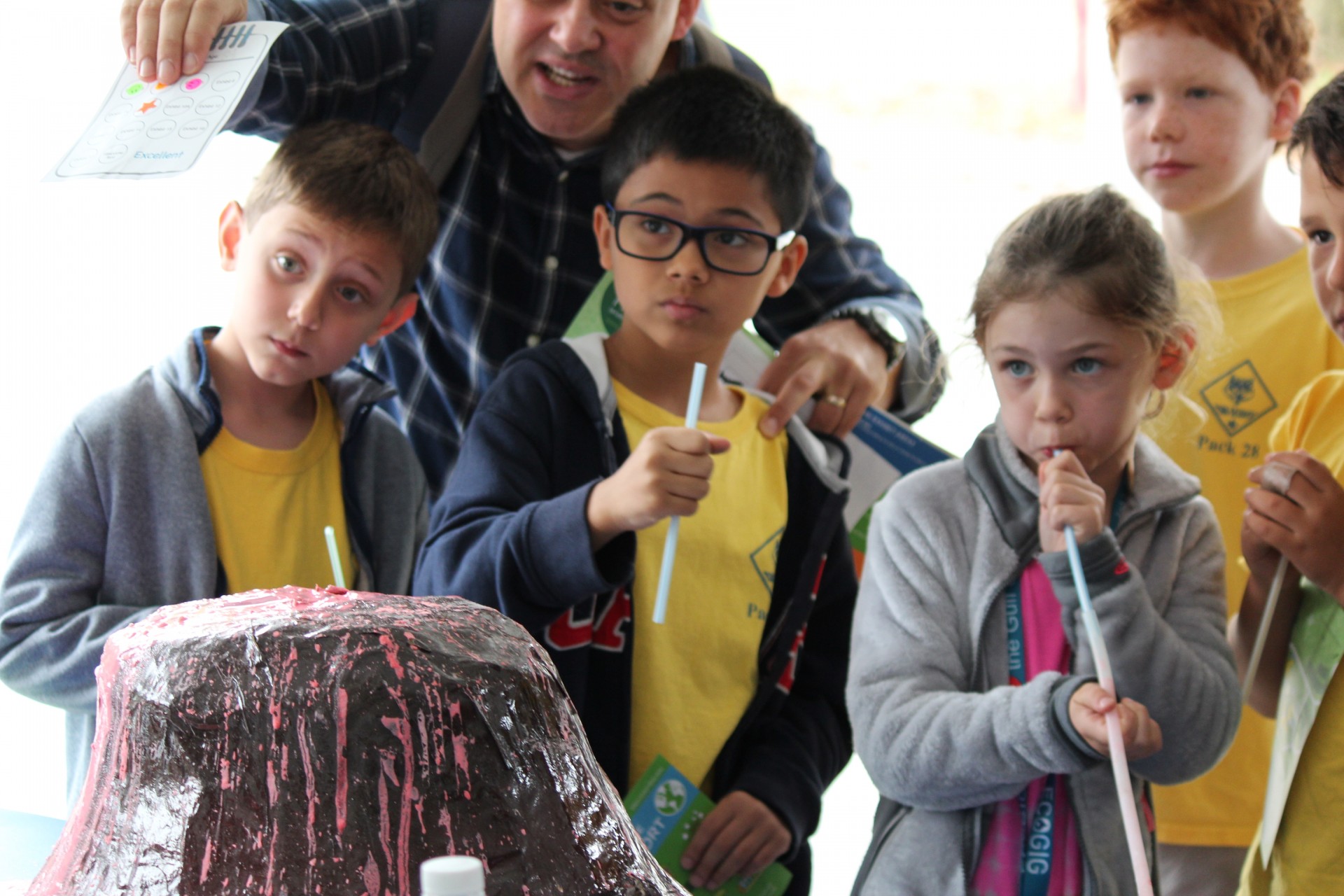 Future scientists in the Lamont Open House crowd got to create human-powered volcanic eruptions, too. 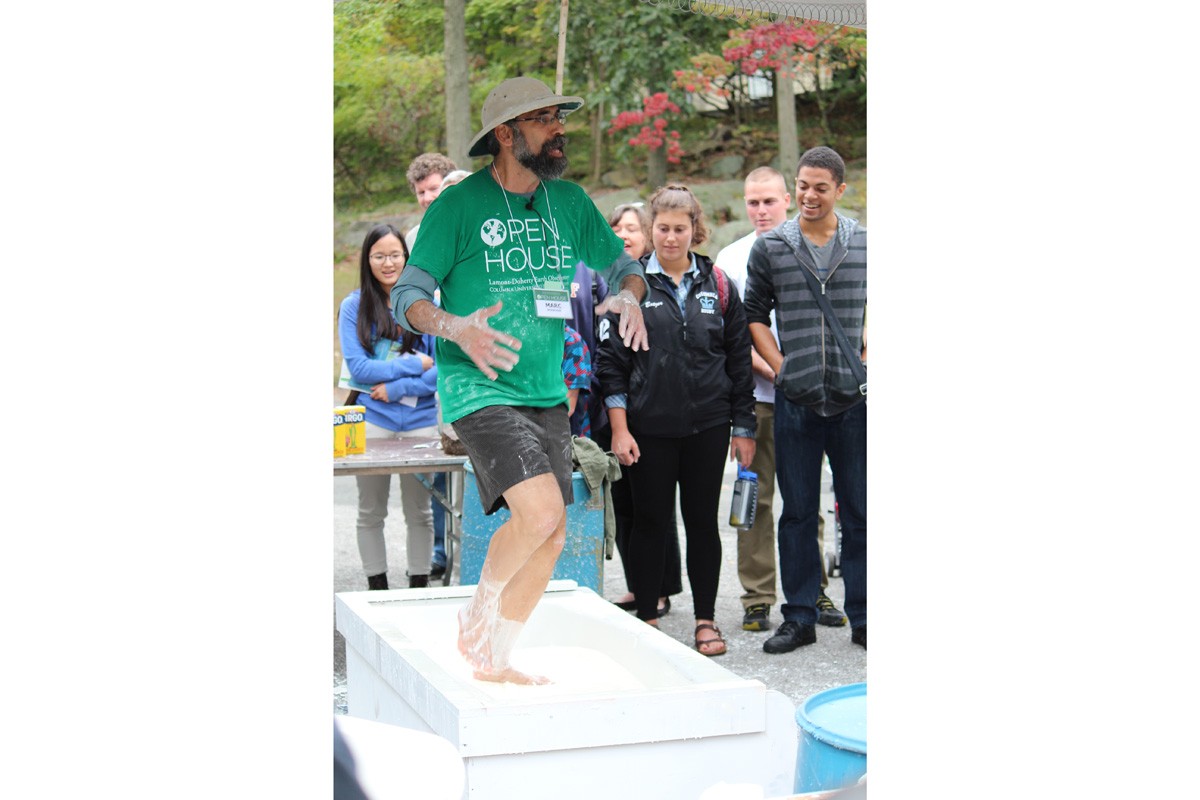 Marc Spiegelman led another large crowd at Lamont Open House through a demonstration of how rocks inside the Earth can behave as liquid or solid. With quick movements, he could dance atop the material, but when he stopped moving, he sank right in. 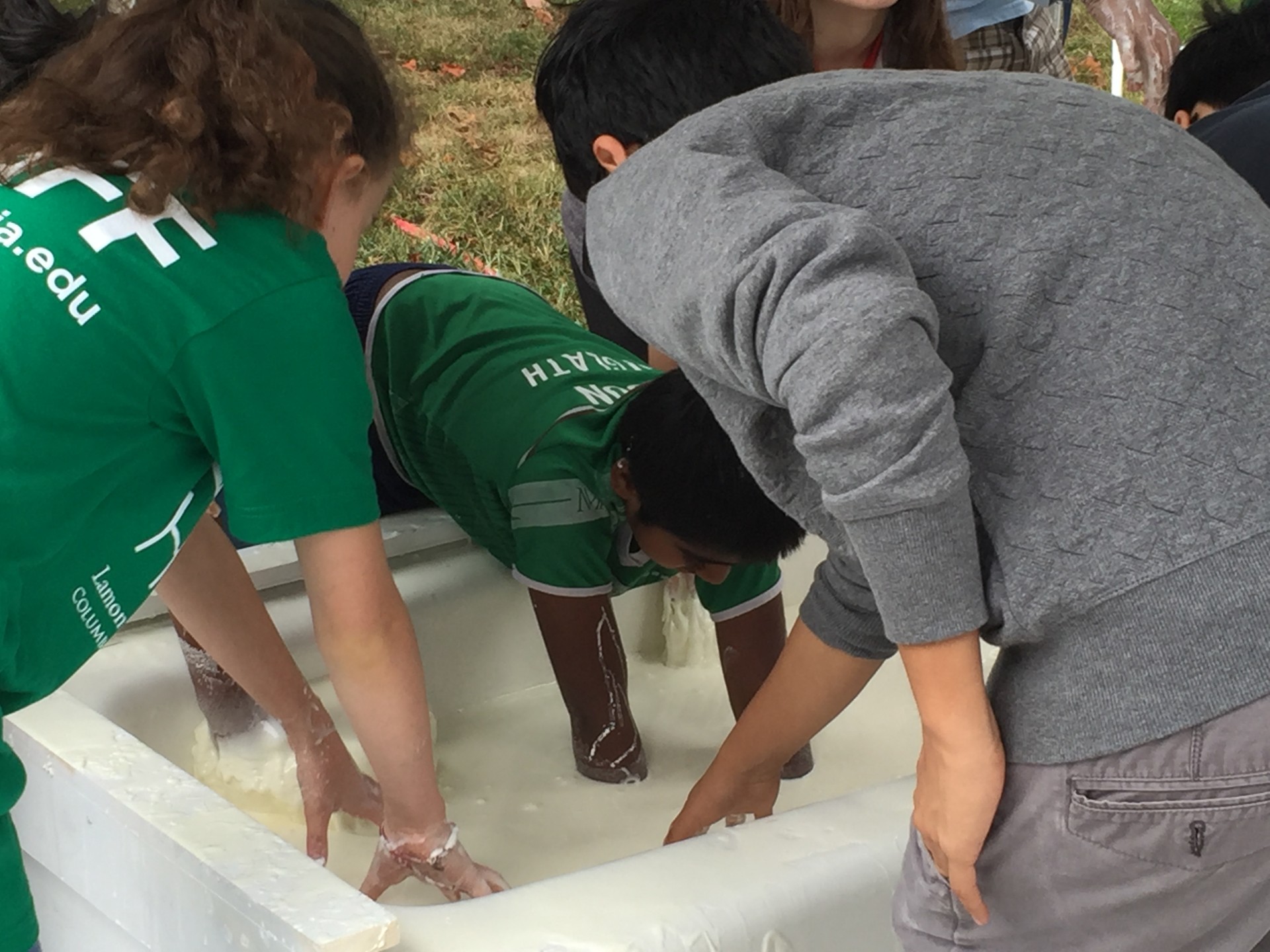 "Clean hands aren't learning hands," was Spiegelman's mantra at Lamont Open House. We had a lot of very happy learners. 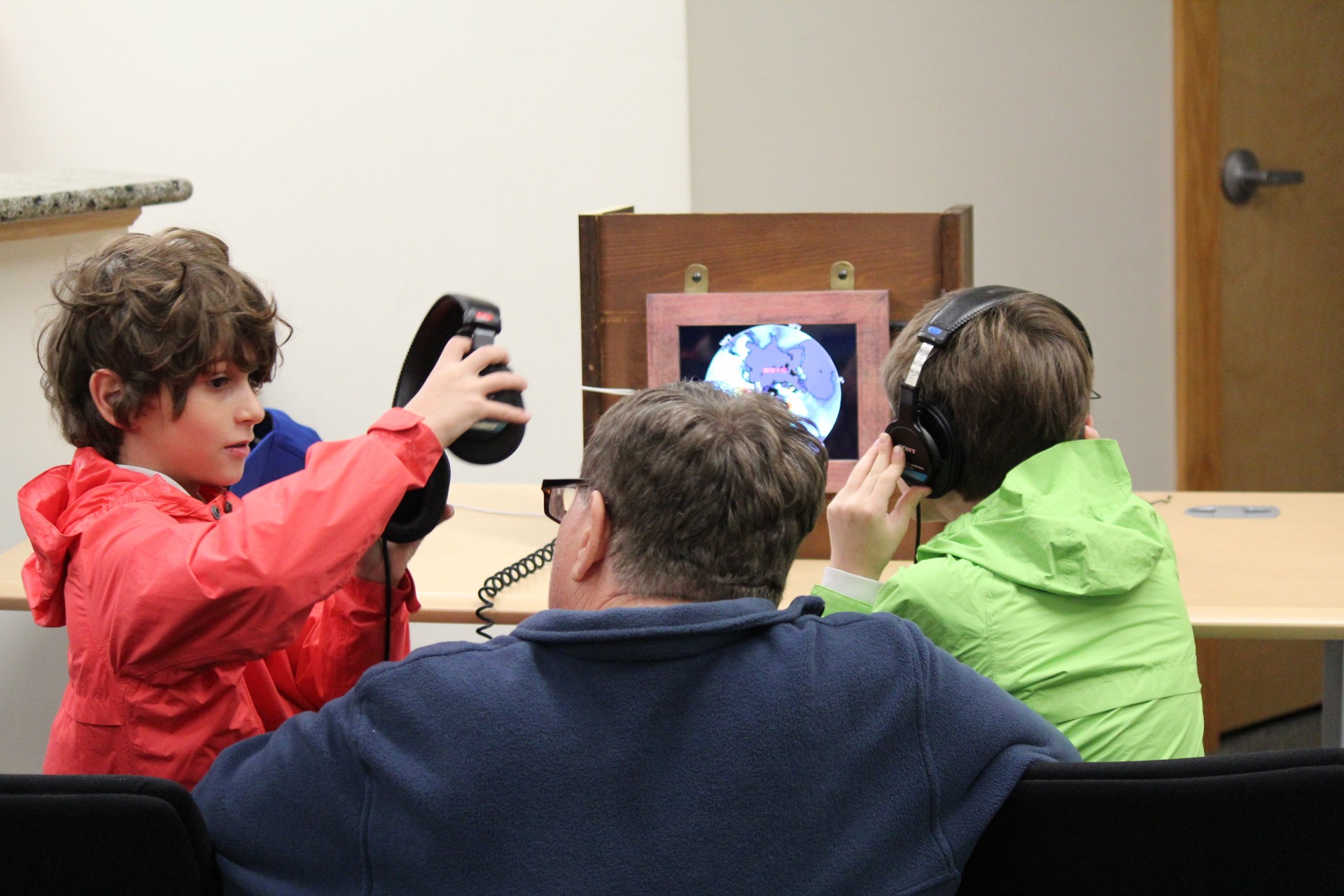 In the Seismology offices, the day was all about listening to earthquakes as they ring through the planet and watching what happens to the seismic waves. 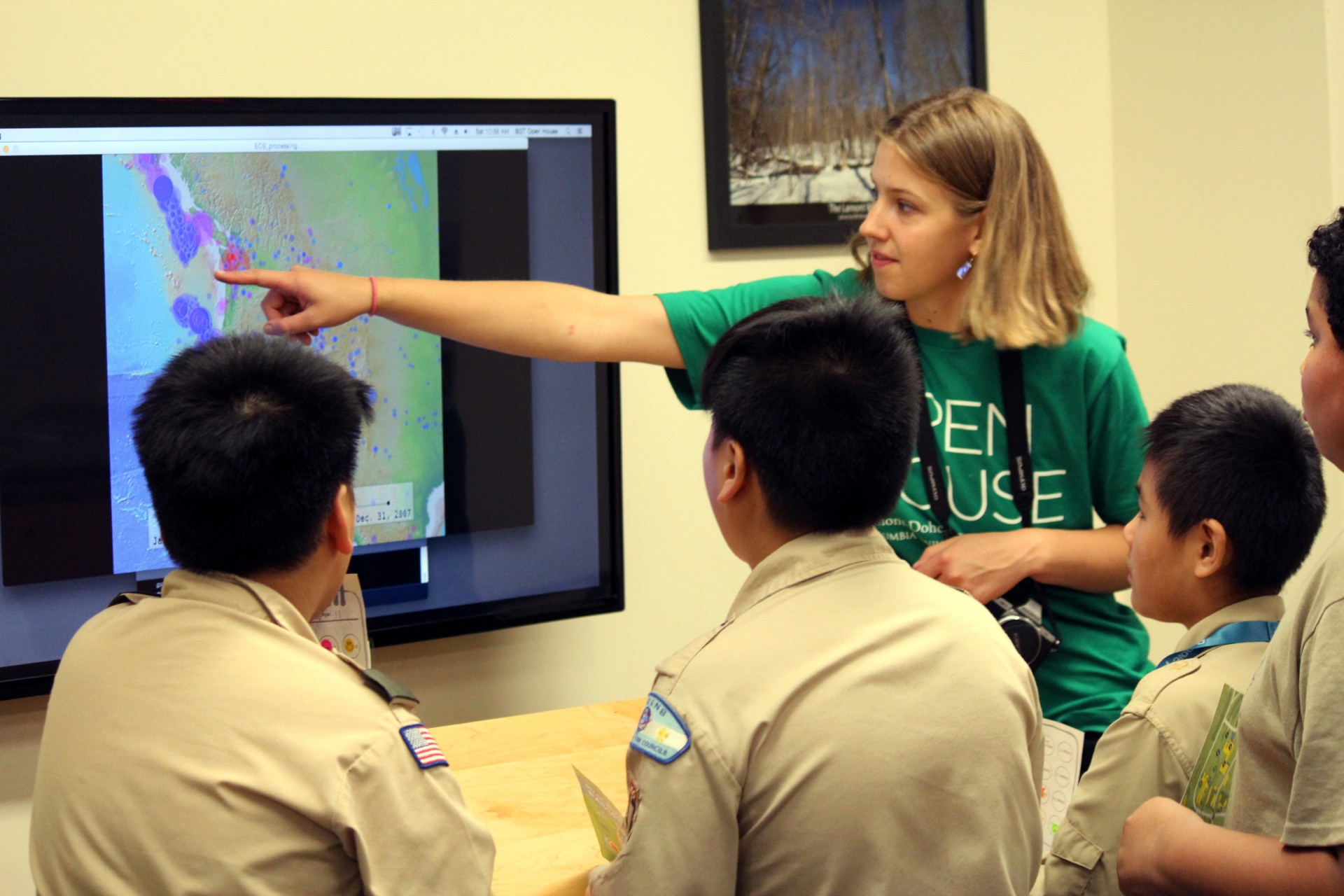 Anna Barth and a group of Boy Scouts looked for patterns in earthquake locations and sizes by watching years of eruptions compressed into a few minutes. The video they're watching is part of the Seismic Sound Lab's SeismoDome project. 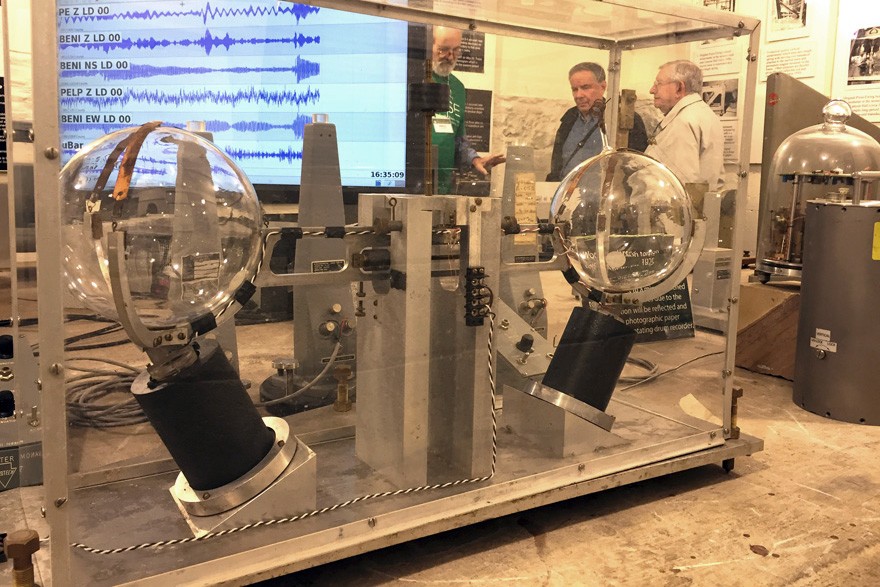 Paul Richards led tours of Lamont's seismology museum, where some early seismometers -- many of them designed at Lamont -- and other monitoring devices reside. 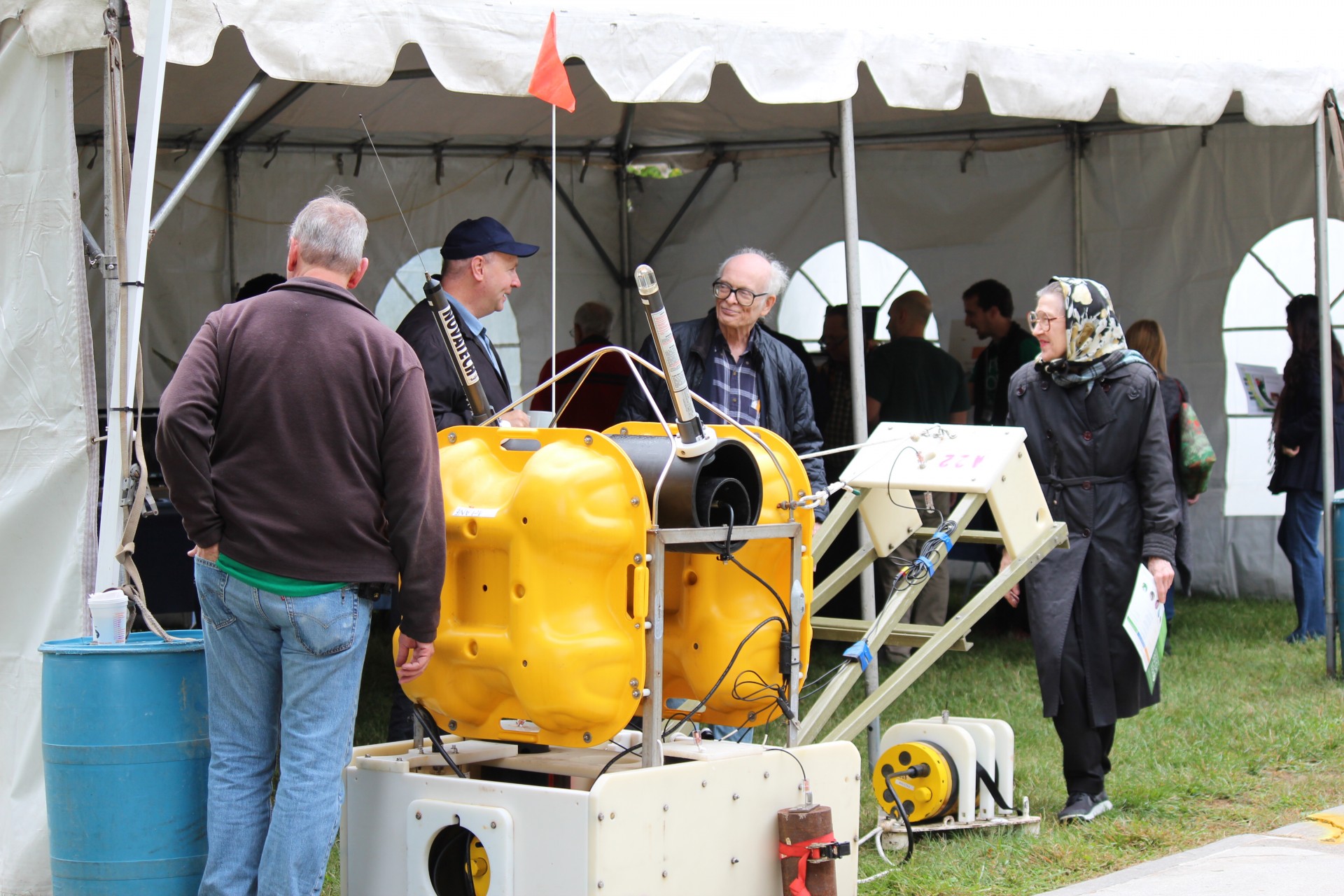 Lamont's modern seismic equipment was also on display. We build ocean bottom seismometers like this one that are used all over the world to monitor movement beneath the seafloor. 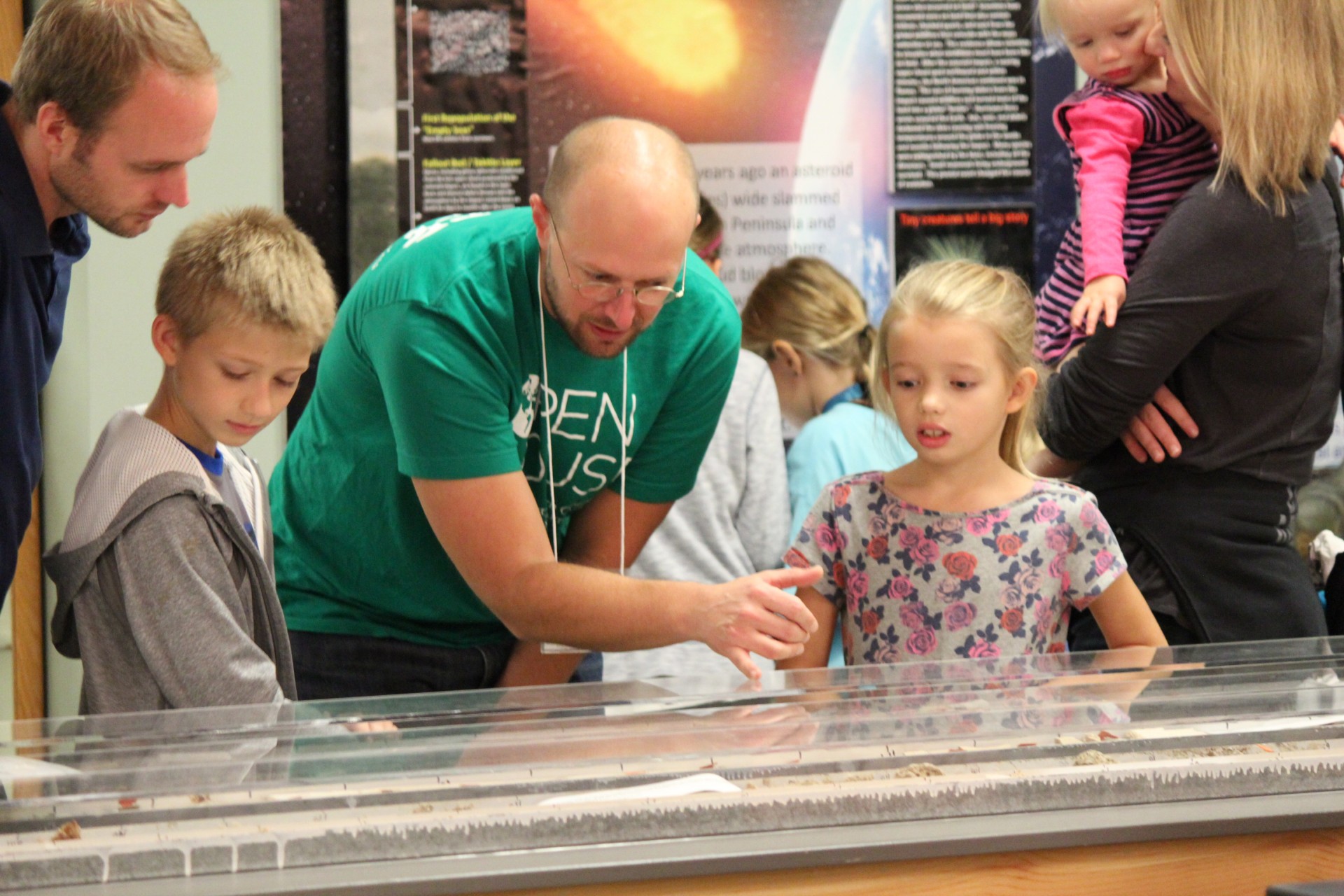 The Lamont Core Lab was another favorite, with visitors lined up out the door. Billy D'Andrea shows young guests how scientists use deep-sea sediment cores to learn about climates in the past. 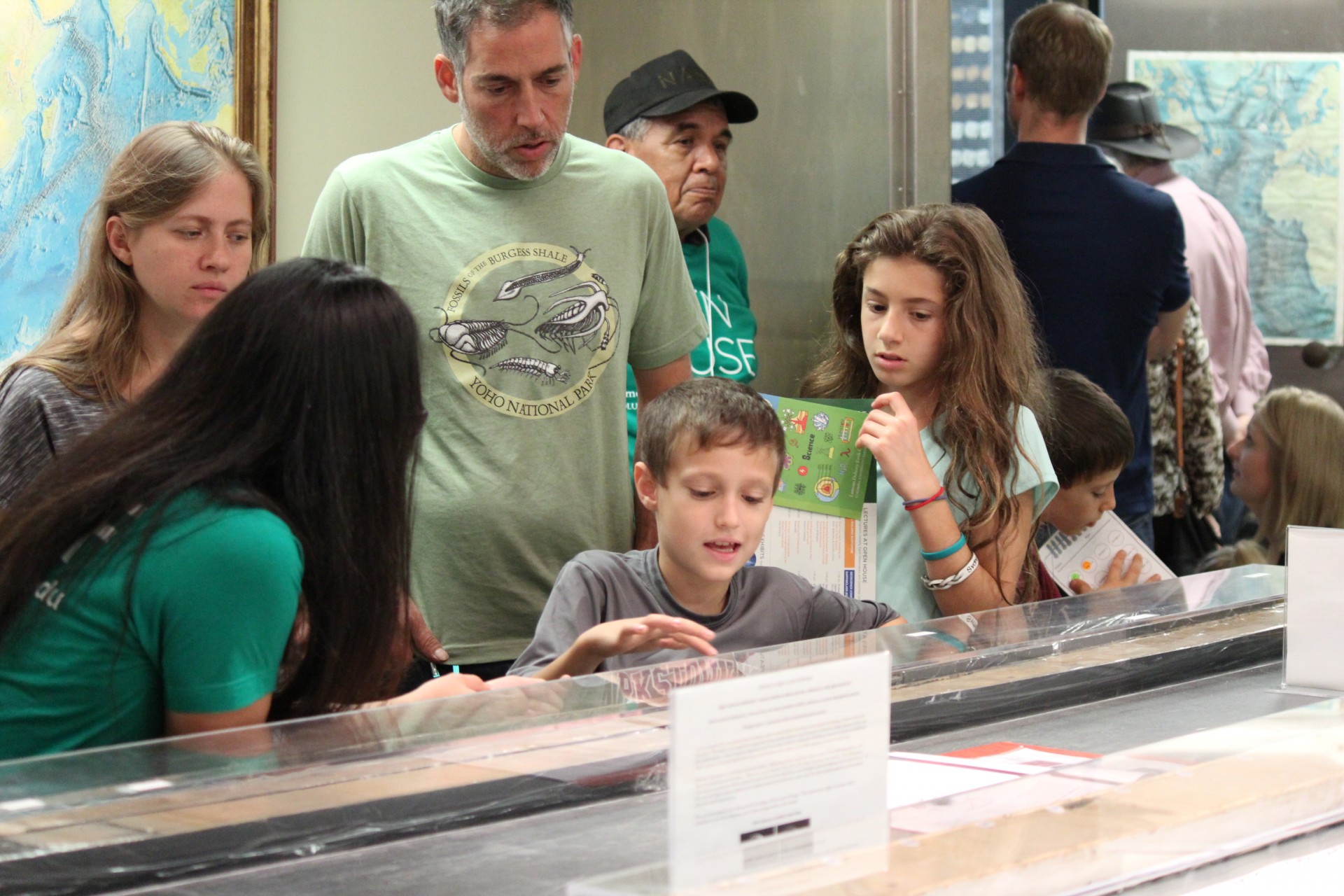 Today's young scientists came with great questions about the Earth, and Lamont graduate students and staff scientists were ready to answer them. 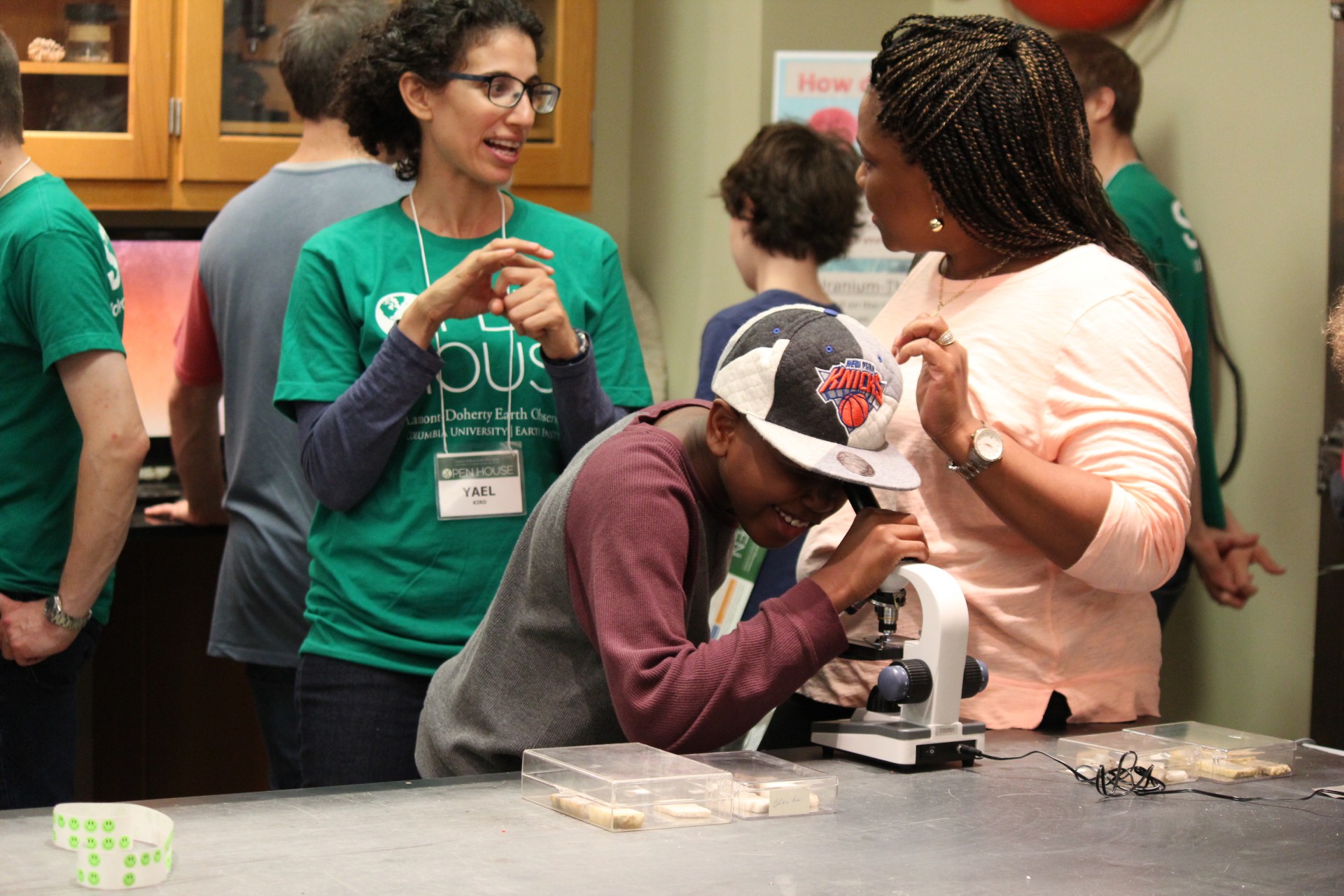 The Core Repository's microscopes and the microworld that comes to life through the lens were a big draw. 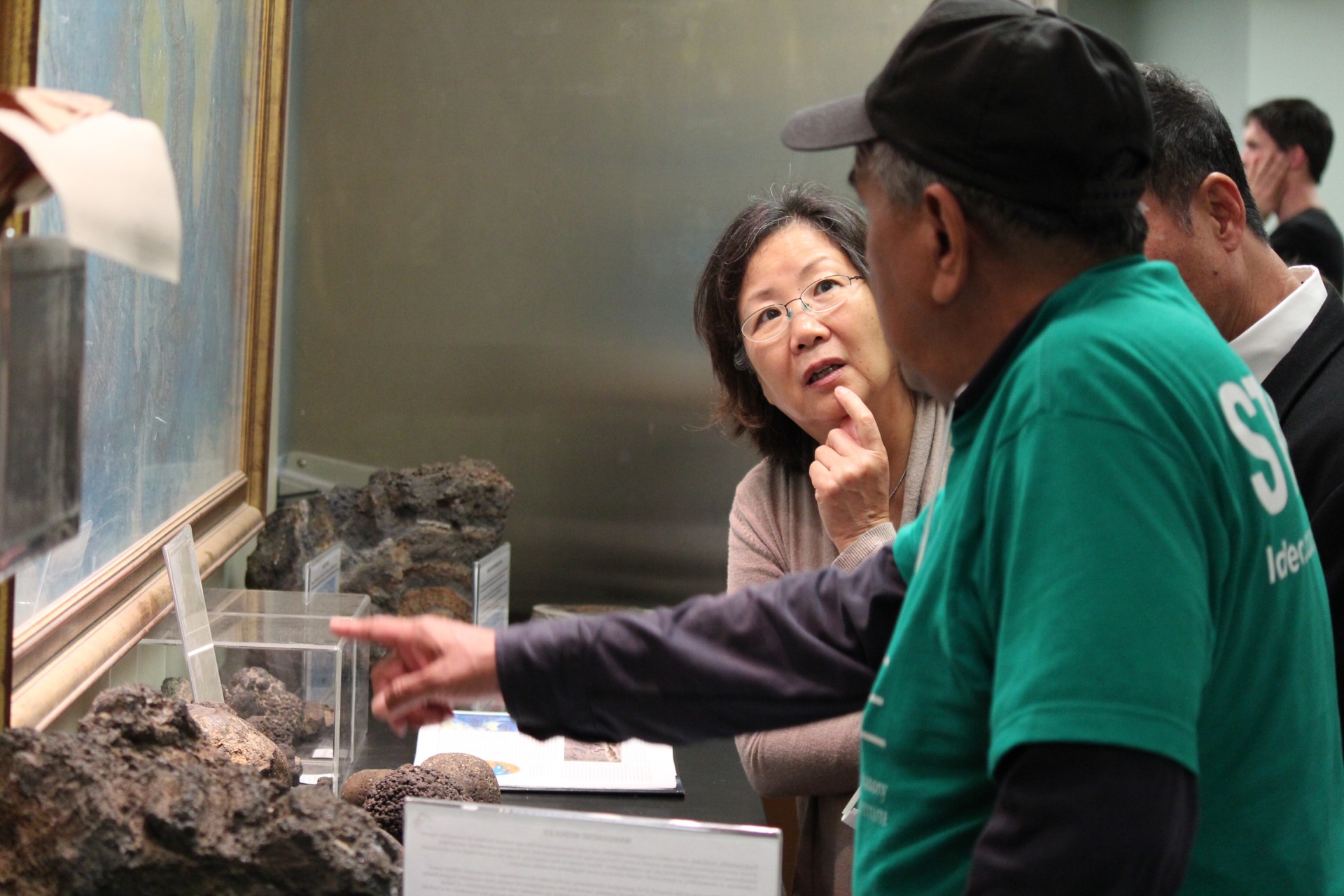 There was plenty for adults at Lamont Open House as well, from the Lamont Core Repository's collections to scientific talks by some of the world's leading experts in the Earth sciences. 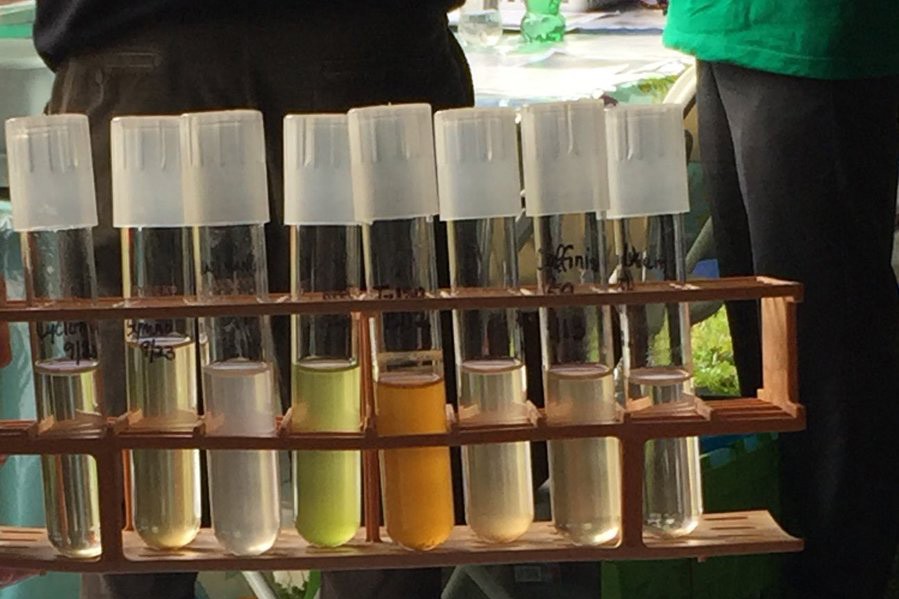 Phytoplankton have a rainbow of pigments that help collect sunlight and keep our planet habitable. Dyhrman Lab showed them off and reminded guests: "Take a breath, thank a phytoplankton." 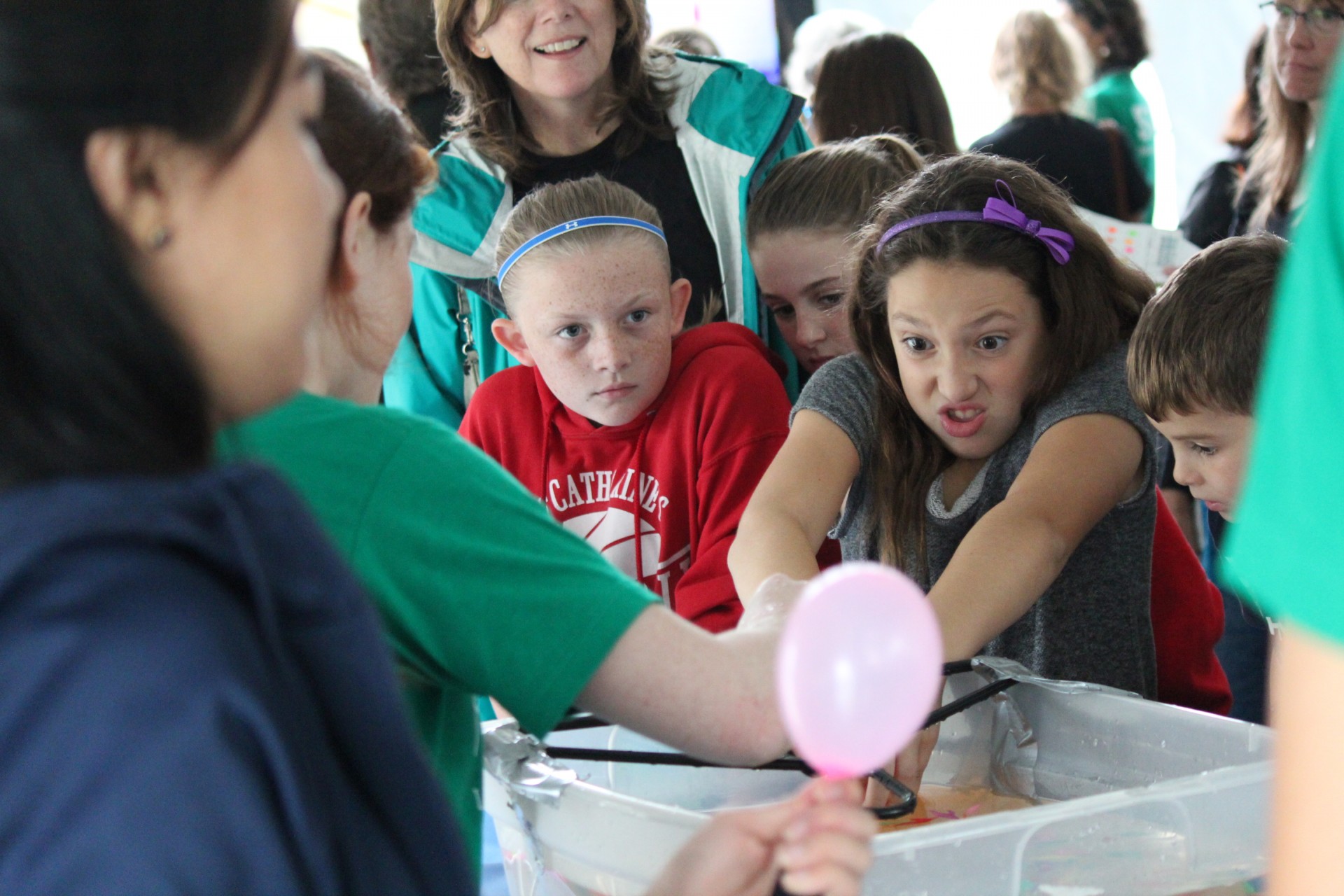 By dunking balloons and releasing the air, Lamont Open House visitors saw how scientists can use air bursts underwater to image structures beneath the seafloor. 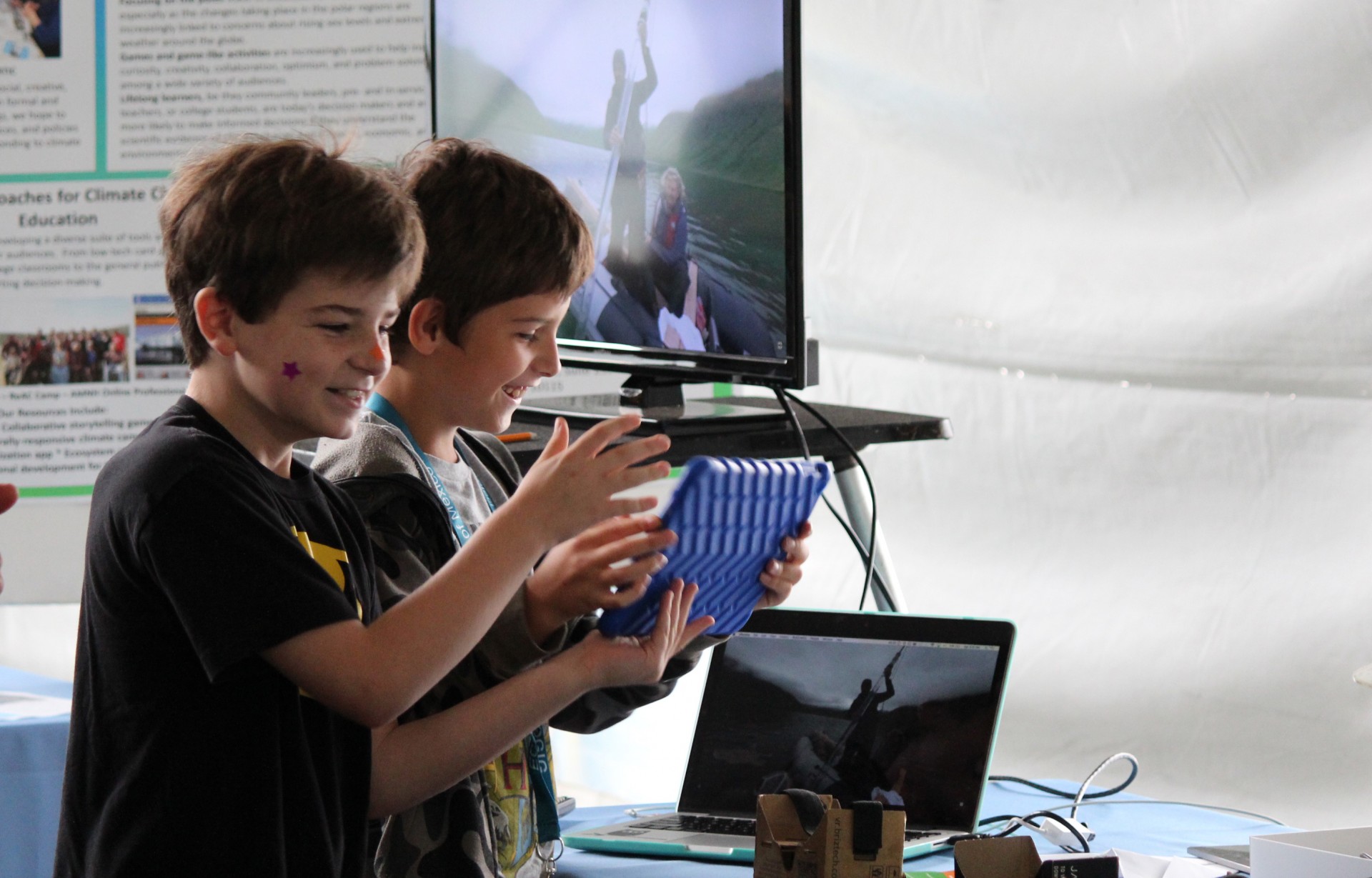 Lamont scientists also brought along 360-degree videos from their expeditions to show off at Open House. Almost like video games. 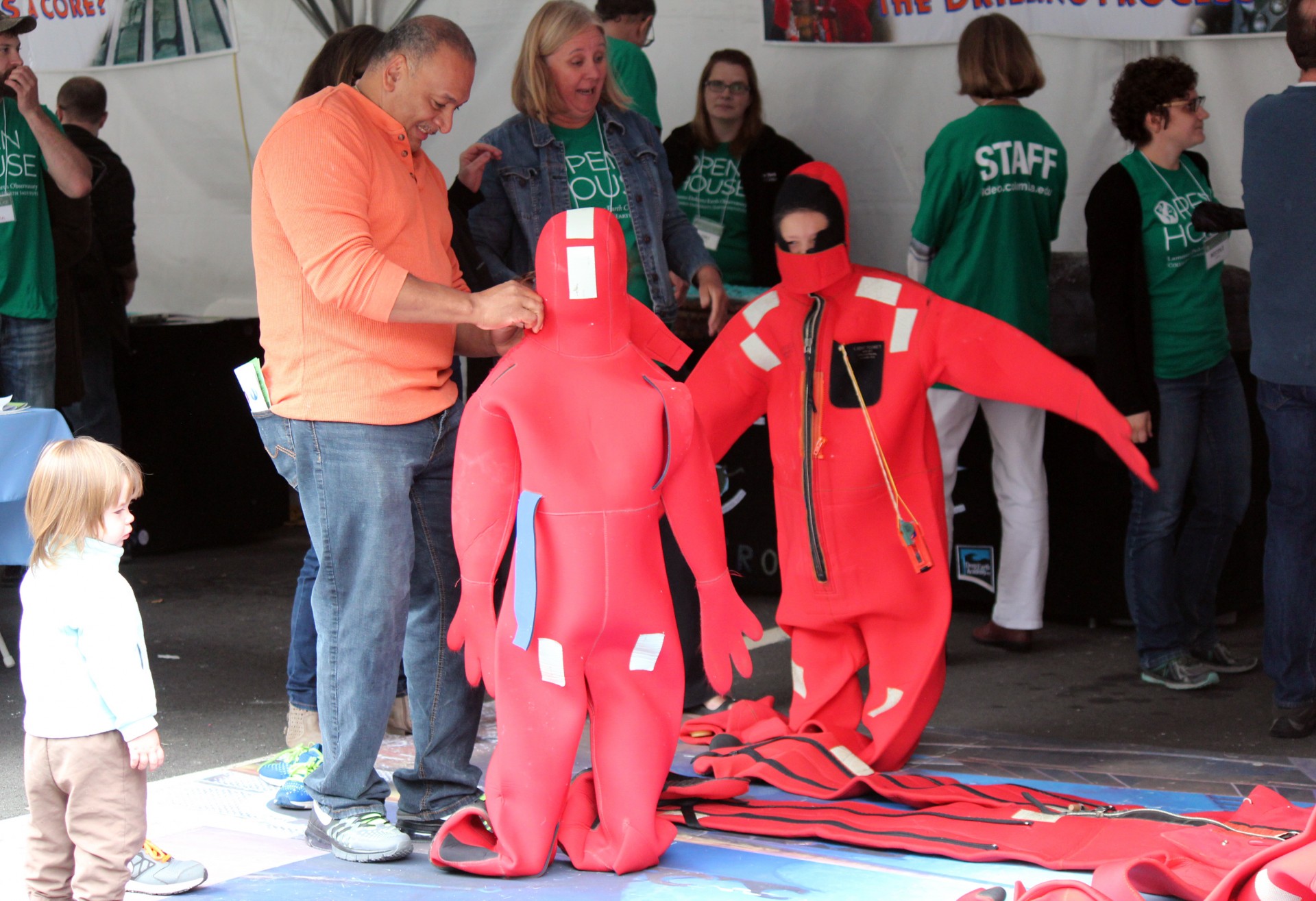 And of course Lamont's scientists had to share the fun of survival suits!

John Park's three children were excited about Ben Holtzman's Seismic Sound Lab earthquake demo. The best part of the Lamont Open House in Park's view: “The interaction that the kids have with the different exhibits. The earthquake one was super cool; the one where you’re in the room and you hear everything going around. I think the kids got a really good understanding â their senses were engaged at the same time they were understanding what actually is going on an earthquake.”

“It’s just an amazing opportunity to expose them to science, to have these hands-on experiments,” said Dawn Cafer, whose 6-year-old son Lucas was running for the next demonstration tent.

"We had a magical time," Noah Green wrote. "Thank you for getting our 6-year-old daughter excited about science."

Up in Monell Auditorium, six of Lamont’sÂ leading scientist gave talks about their latest projects and discoveries, each representing one of the Earth Observatory’sÂ strategic initiatives. The presentation videos are all now available online to rewatch or, for those who were too busy getting their hands into Earth science experiments on Saturday, to see for the first time.

Suzana Camargo: Hurricanes and Typhoons: Past, Present and Future

Park Williams: The Impact of Human-caused Warming on Drought and Fire in the Western United States