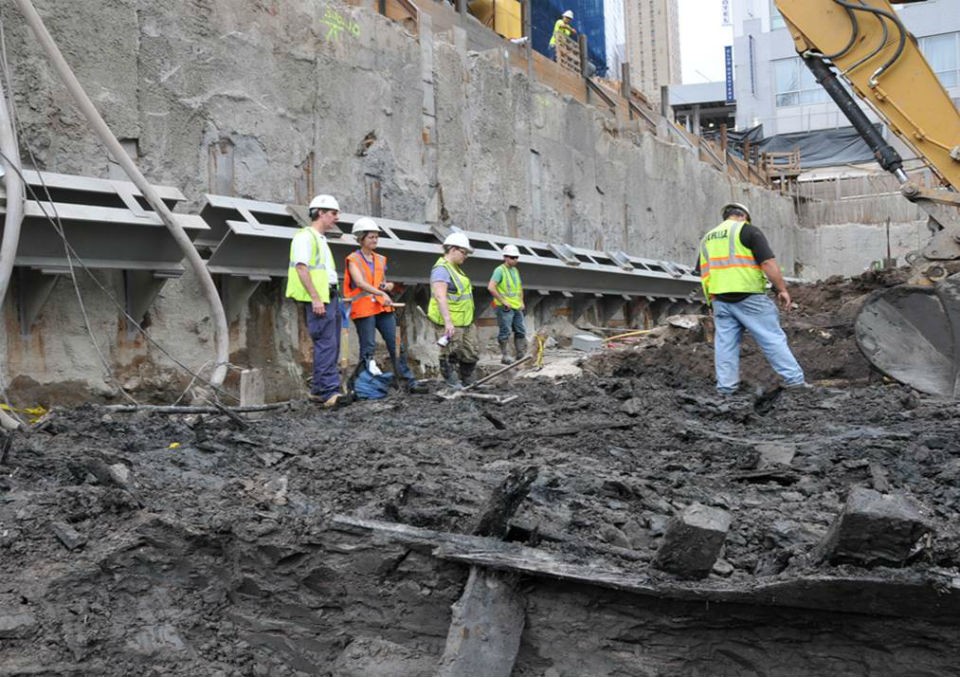 Archeologists monitoring excavation at the former World Trade Center site stopped work on the morning of July 13, 2010 after spotting a pair of curved timbers poking out from the mud. âIt has to be a ship,â AKRF archeologist Molly McDonald 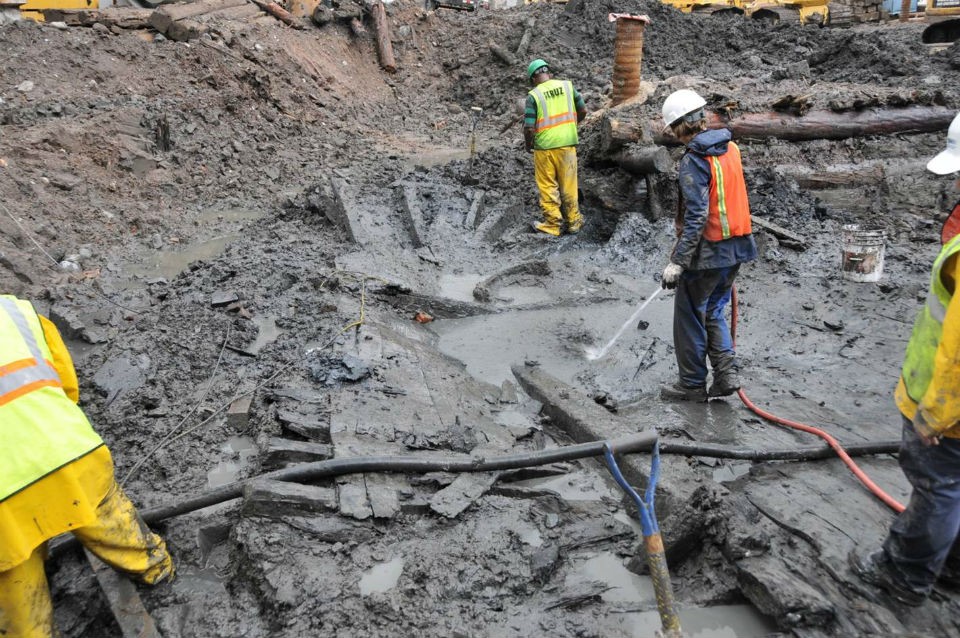 With a hose and gloves, they began to dig. They had limited time to remove the ship before construction resumed on an area slated to house vehicle ramps leading to parking beneath the new World Trade Center. 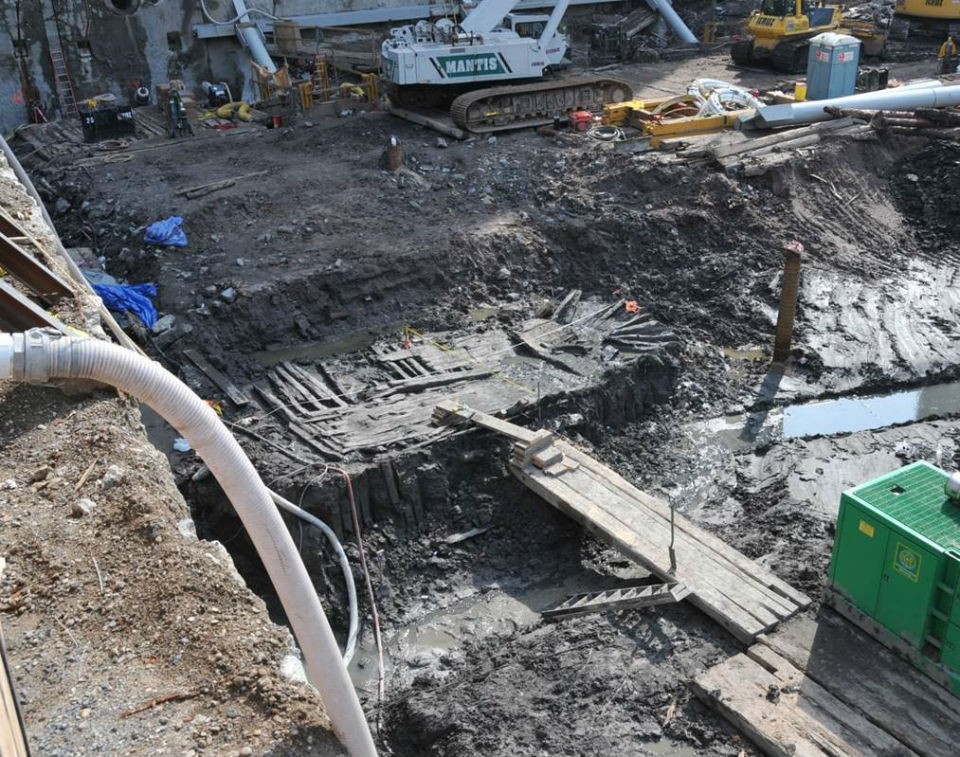 On the third day of work, a full outline of the shipâs hull emerged. 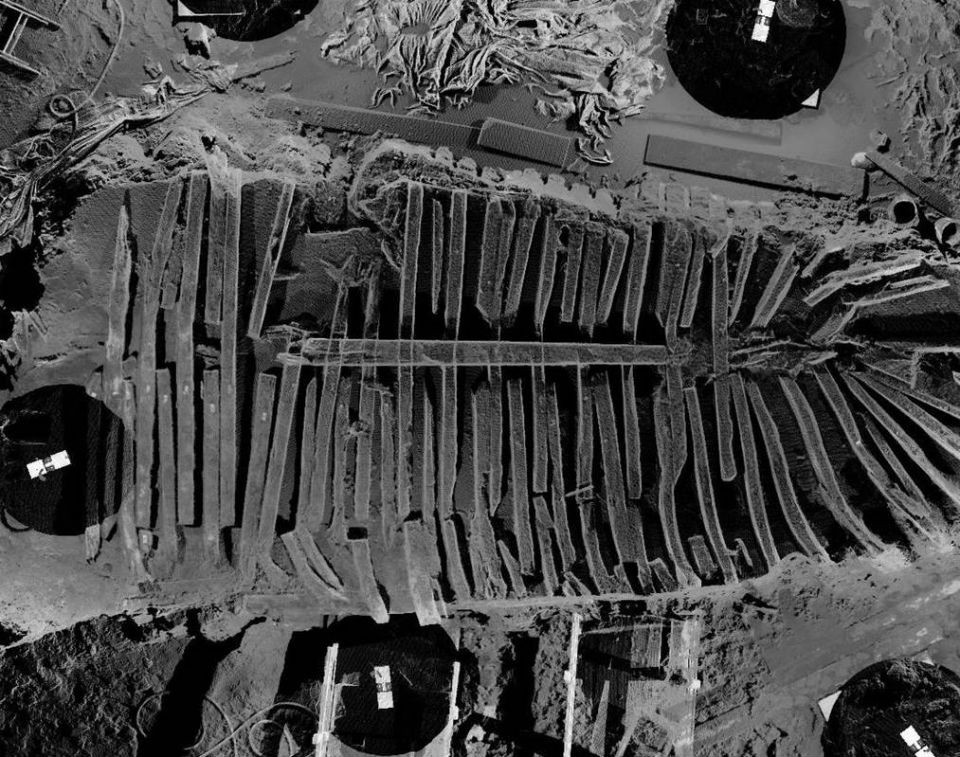 The entire ship was scanned before its removal to create a precise record of where each of its pieces were originally found. (Corinthian Data Capture LLC) 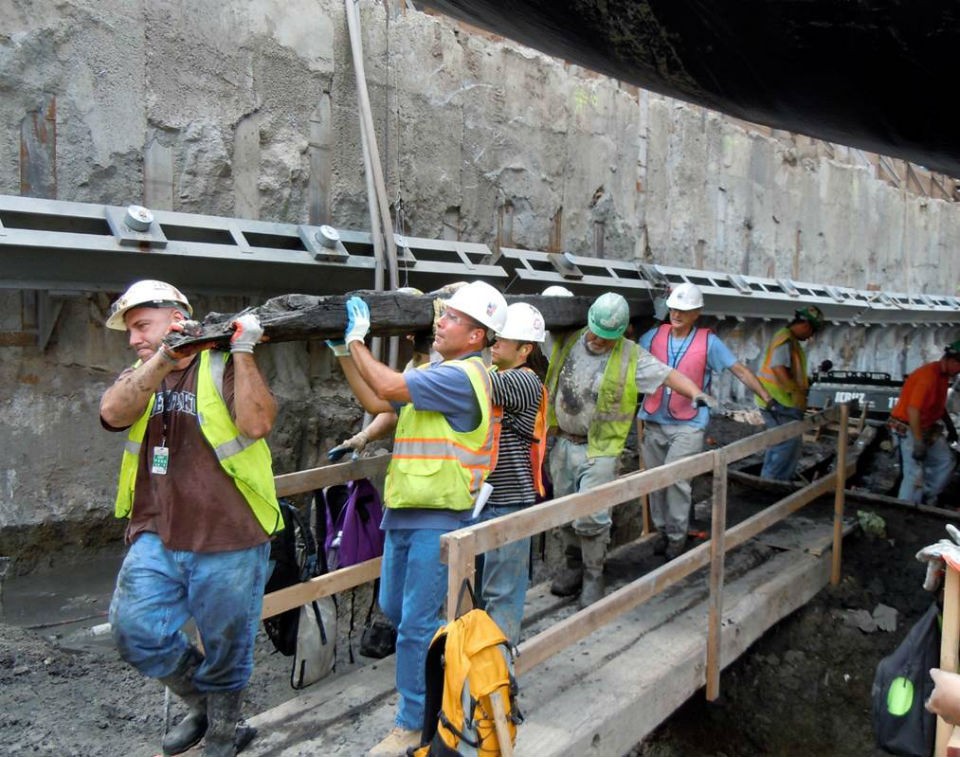 A team of archeologists with New York-based AKRF and others worked from dawn until dusk cataloging each timber and artifact before hauling the pieces off site. 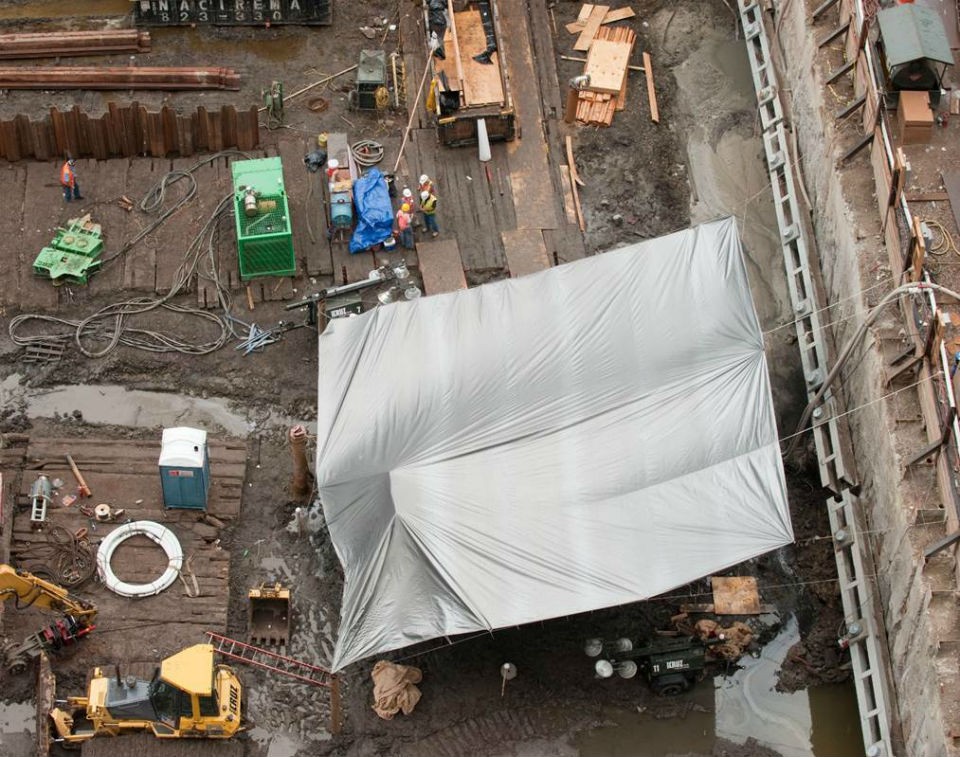 A tarp was stretched over the site to shield the shipâs timbers from the harsh summer sun and prevent them from drying out, causing warping and splitting. The timbers were also regularly hosed down. 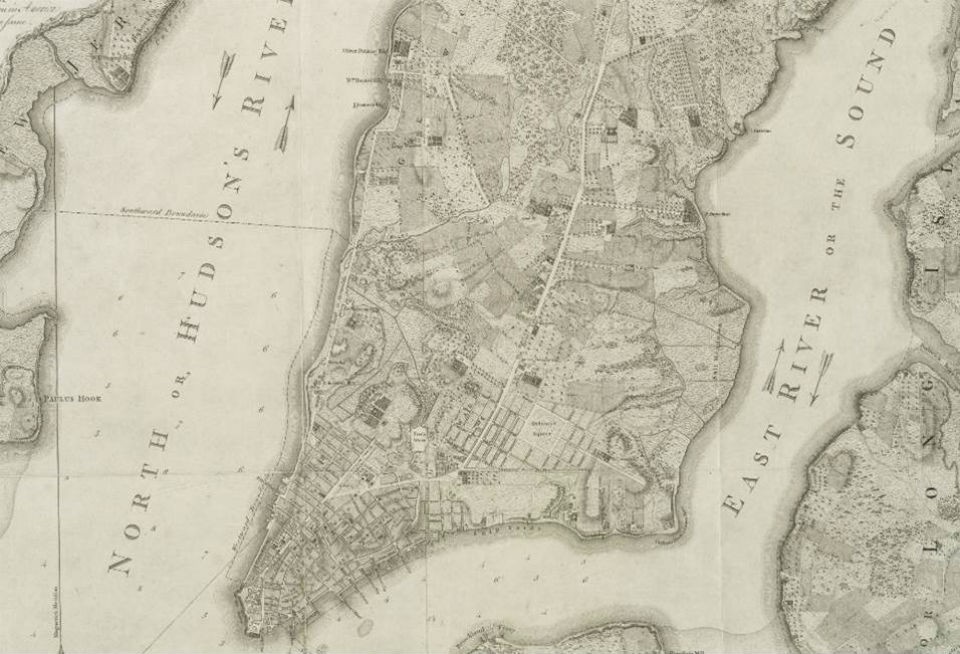 Archeologists think the ship sailed to its final resting spot a block west of Greenwich Street in the 1790s. At the time this 1776 map was drawn, Manhattanâs western shore stopped at Greenwich Street. As New York prospered following the Revoluti 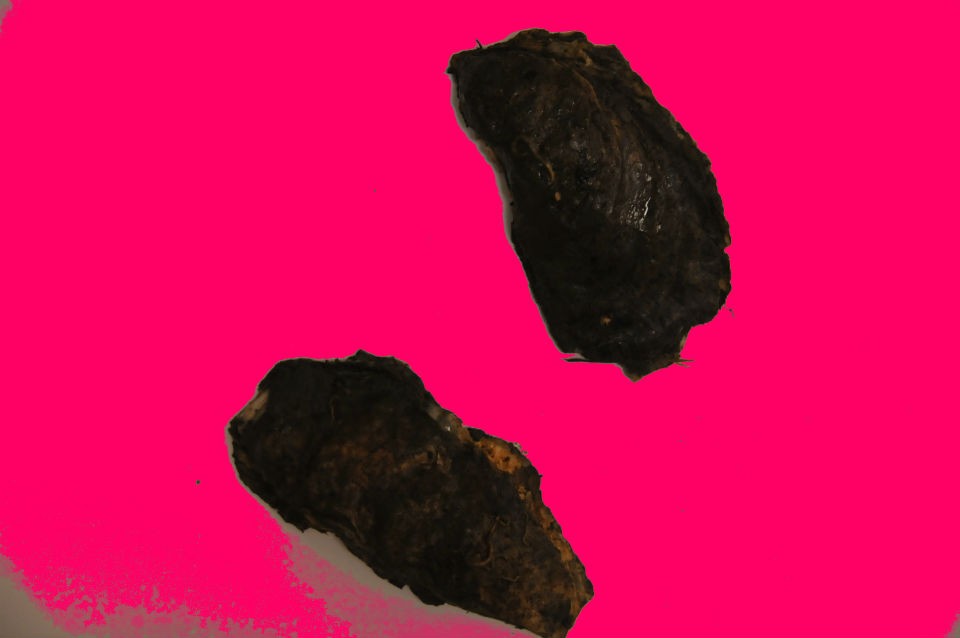 Oysters were found growing on the shipâs hull, suggesting that it languished in open water before it was eventually buried in garbage, rocks and other landfill material. 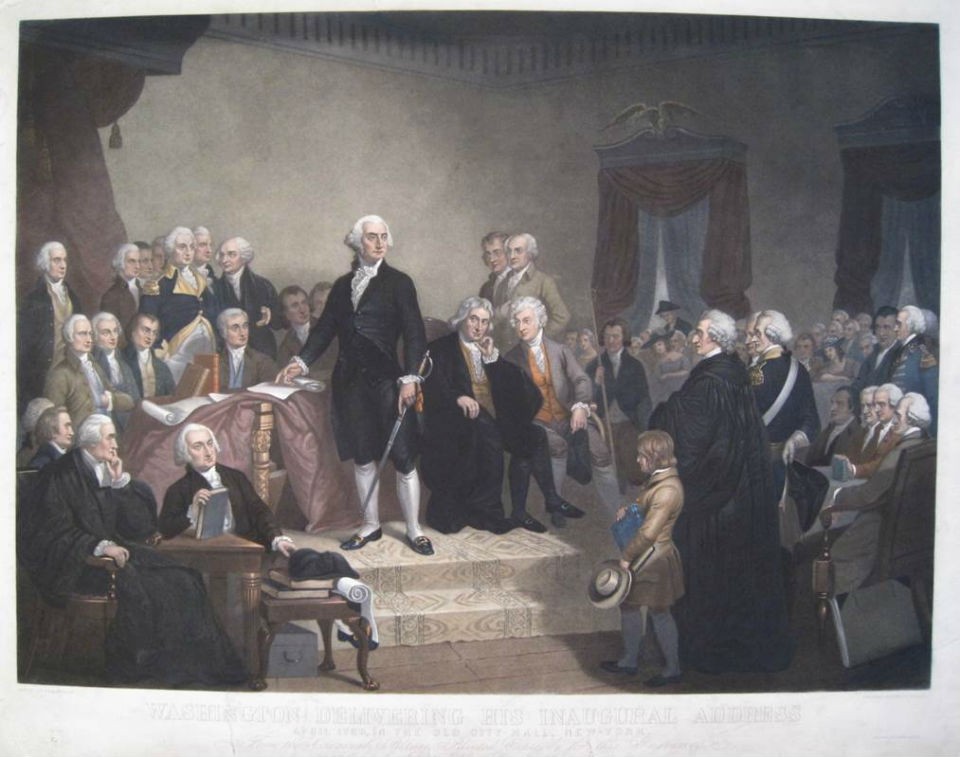 Five blocks from the shipâs last port of call, George Washington was sworn in as the nationâs first president at Federal Hall in 1789. A year later, the U.S. Capitol moved from New York City to Philadelphia before its final stop in Washingt

Tree-ring scientists at Lamont-Doherty Earth Observatory were called in to establish the shipâs age and origin. Inspecting its timbers on site, Lamontâs Rosanne DâArrigo and Neil Pederson were happy to find tree-rings preserved well en 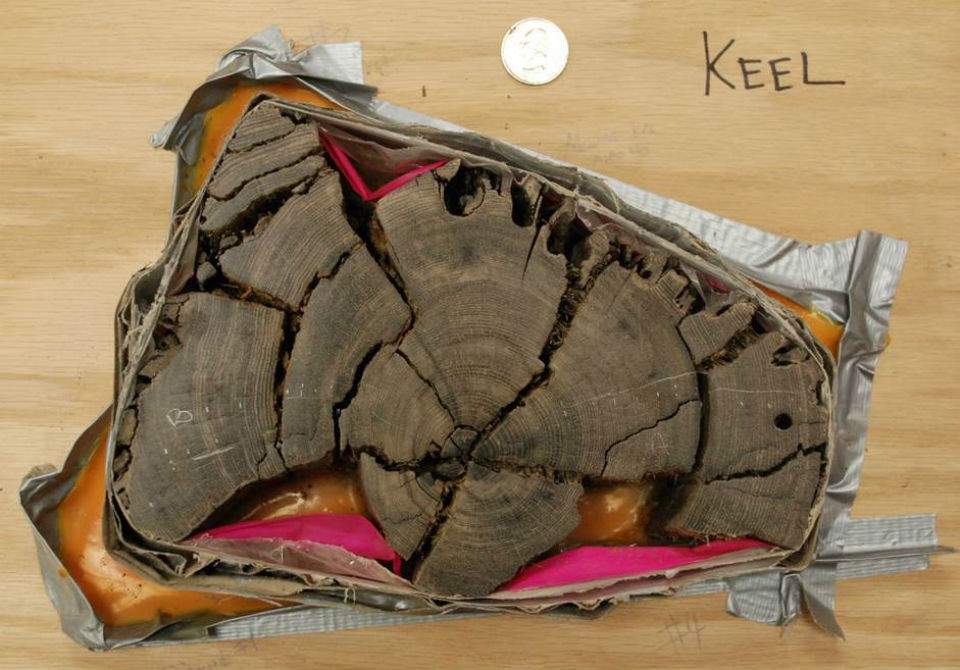 Their first breakthrough came in identifying the wood in the shipâs spine, or keel, as hickory, which told them the ship was probably built in the northeastern United States. Hickory had vanished from the European landscape thousands of years be 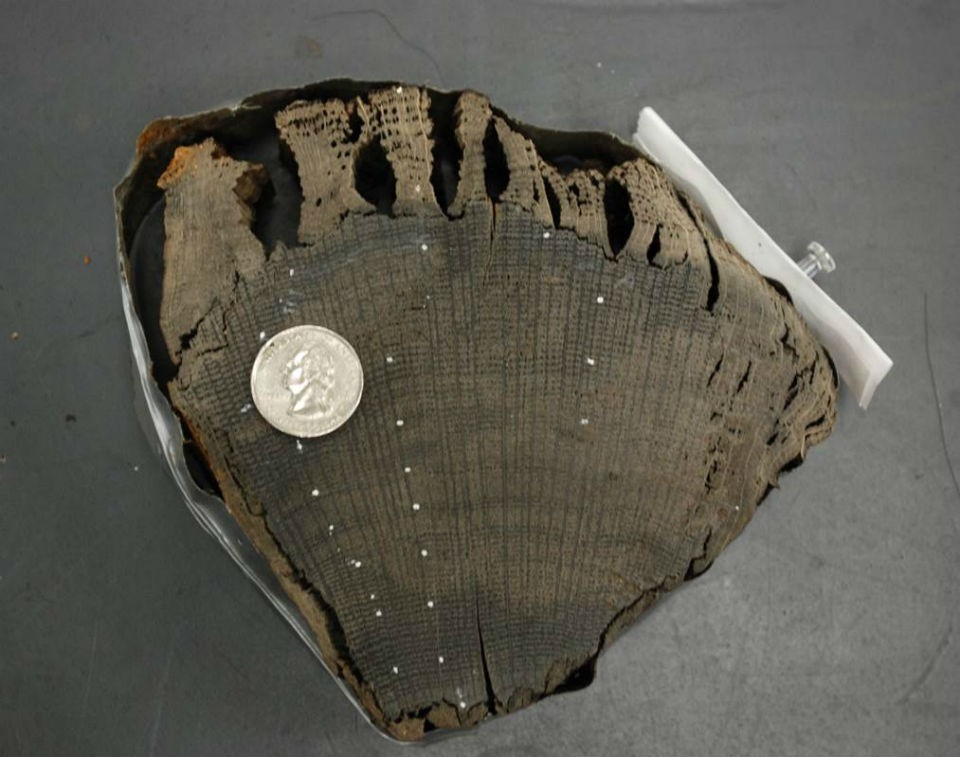 Another break was the well-defined growth rings in the white oak that made up the shipâs frame. In dry years trees form tighter rings, in wet years, wider rings, recording the unique climate in which the trees lived. The Lamont-Doherty scientist 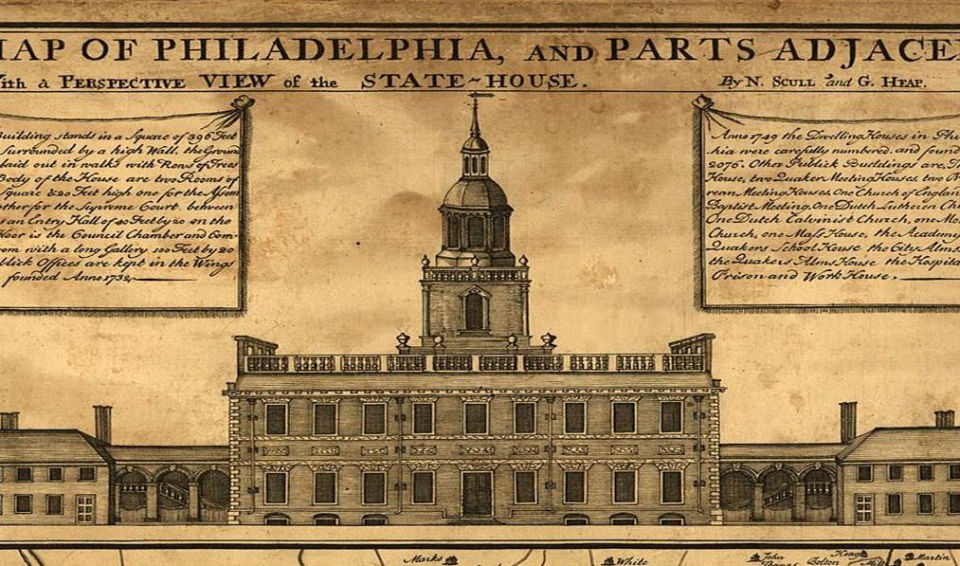 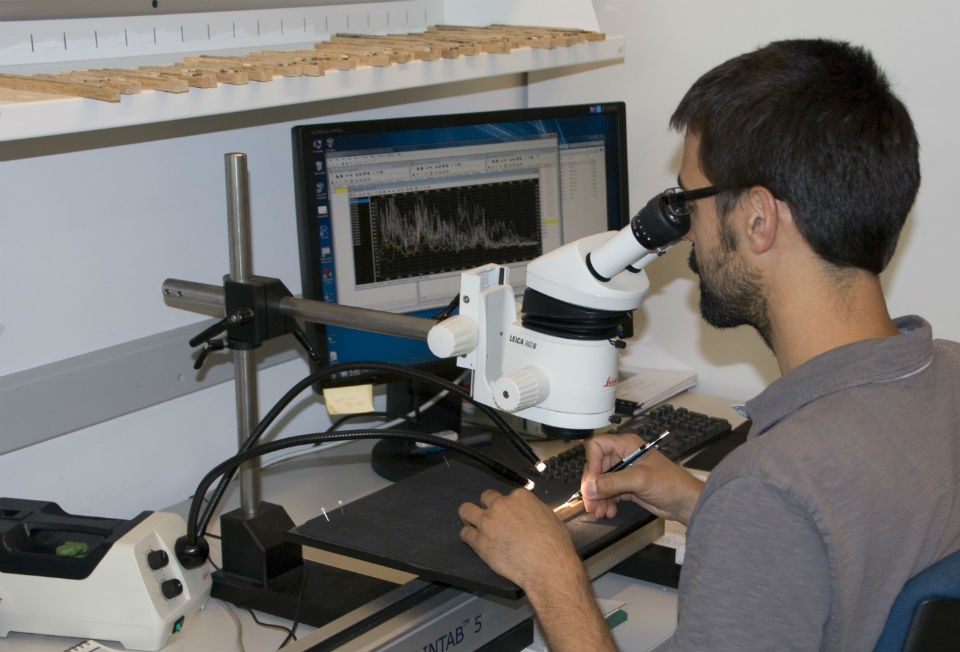 Much of the analysis was done on Lamont-Dohertyâs campus in Palisades, N.Y., by postdoctoral researcher Dario Martin-Benito, now at ETH ZÃ¼rich. (Magdalena NÃ¶tzli) 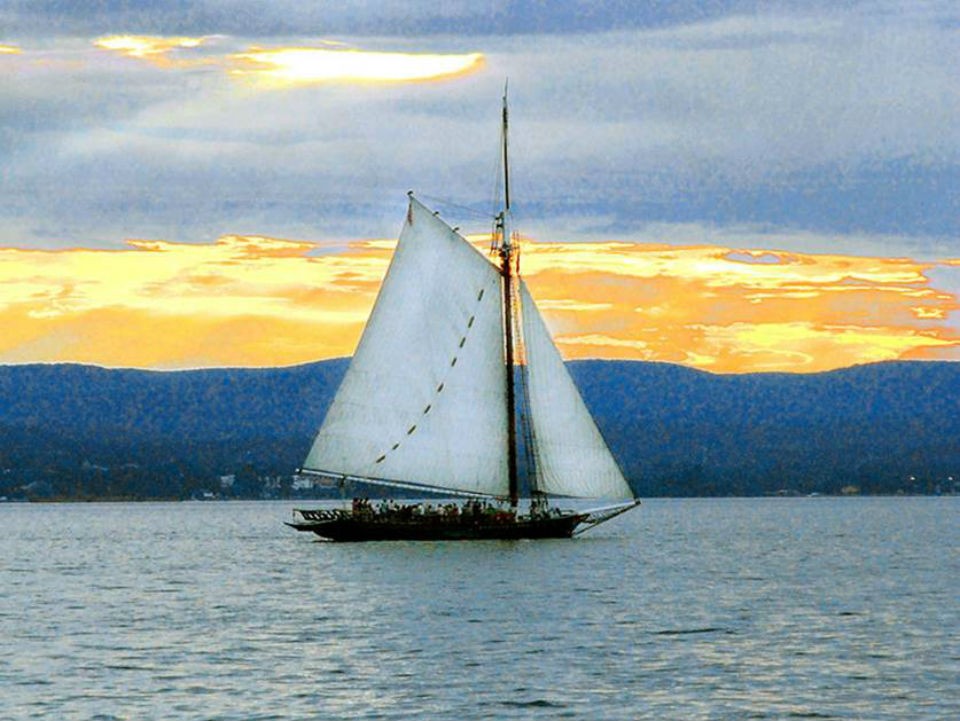 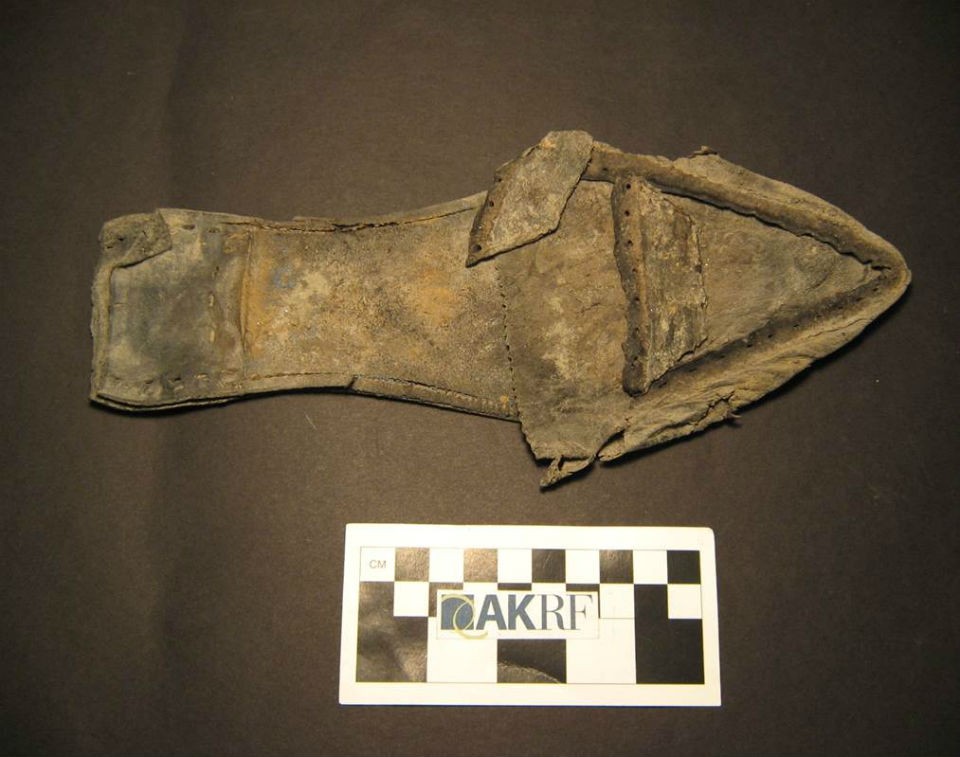 Some of the trash found amid the shipâs remnants included this leather shoe identified by experts at Colonial Williamsburg as made sometime from 1790-1810. 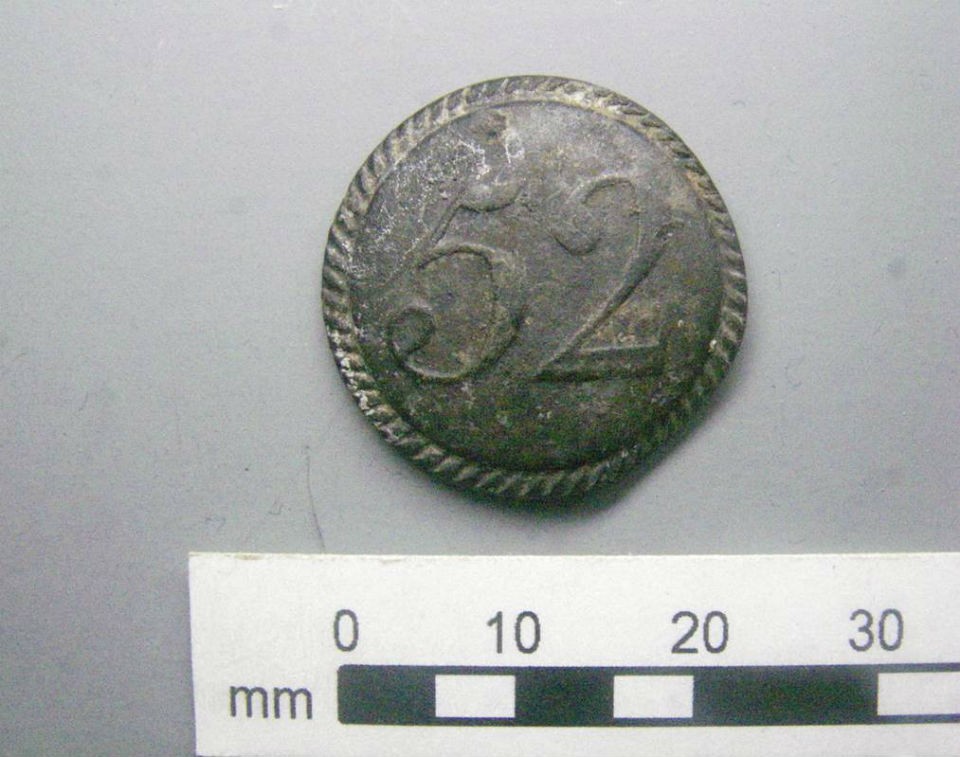 A pewter button stamped with the number â52â was found wedged in the shipâs stern; it may have belonged to a soldier from Britainâs 52nd Regiment of Foot, a light infantry unit that fought at Lexington and Concord, among other Rev 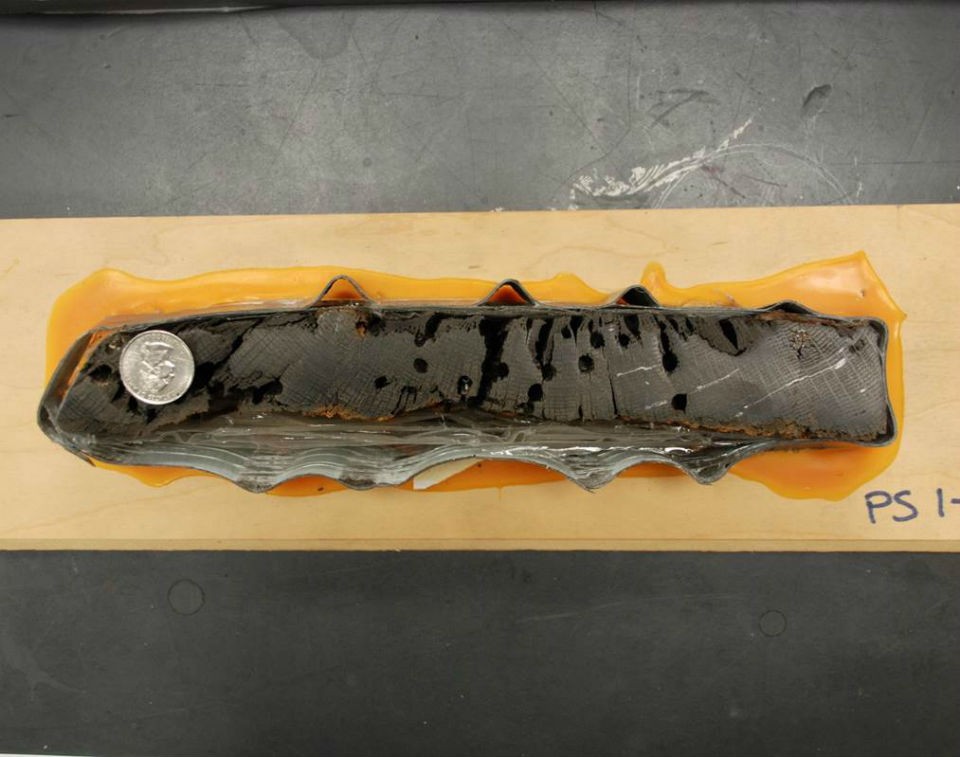 The shipâs frame was riddled with small holes, suggesting it had spent time in the Caribbean, a hub in the rum, sugar and slave trade at the time. Teredos, or shipworms, are native to the salty, warm waters of the South Atlantic Ocean. (Lamont-D 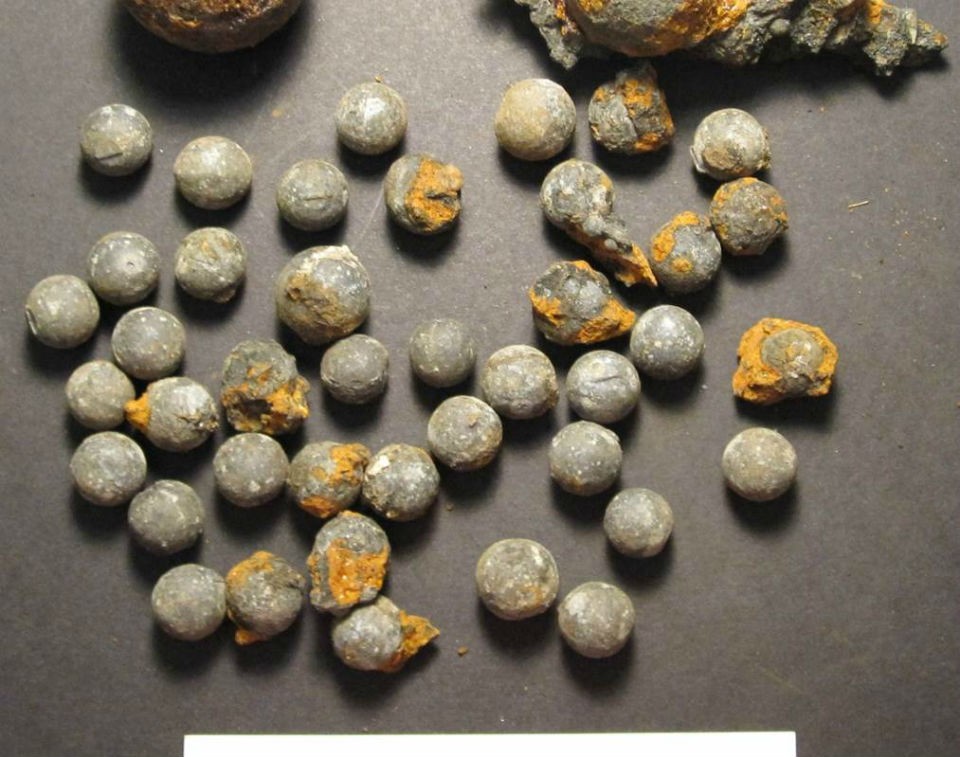 An array of munitions were also found on board, including a French-made cannonball and the American-made musket balls pictured. New York harbor was a dangerous place through the 1700s amid ongoing wars with the French and local Native Americans; Merc

Four years ago this month, archeologists monitoring the excavation of the former World Trade Center site uncovered a ghostly surprise: the bones of an ancient sailing ship. Tree-ring scientists at Columbia University's Lamont-Doherty Earth Observatory were among those asked to analyze its remains for clues about its age and origins. In a study now out in the journal Tree Ring Research, the scientists say that an old growth forest in the Philadelphia area supplied the white oak used in the ship's frame, and that the trees were probably cut in 1773 or so—a few years before the bloody war that established America's independence from Britain.

Key to the analysis was wood sampled from Philadelphia's Independence Hall two decades earlier by Lamont tree-ring scientist Ed Cook. It turns out that growth rings still visible in the building's timbers matched those from the World Trade Center ship, suggesting that the wood used in both structures came from the same region. As trees grow, they record the climate in which they lived, putting on tighter rings in dry years and wider rings in wet years. In the process, a record of the region's climate is created, allowing scientists to see how Philadelphia's climate differed hundreds of years ago from say, New York's Hudson Valley. The climate fingerprint also serves as a kind of birth certificate, telling scientists where pieces of wood originated.

The ship itself has been tentatively identified as a Hudson River Sloop, designed by the Dutch to carry passengers and cargo over shallow, rocky water. It was likely built in Philadelphia, a center for ship-building in Colonial times. After 20 to 30 years of service, it is thought to have sailed to its final resting place in lower Manhattan, a block west of Greenwich Street. As trade in New York harbor and the young country flourished, Manhattan's western shoreline inched westward until the ship was eventually buried by trash and other landfill. By 1818, the ship would have vanished from view completely until the terrorist attacks on Sept. 11, 2001 set in motion the events leading to the World Trade Center's excavation and rebirth. The ship's removal from Ground Zero and the analysis of its timbers and some of the artifacts uncovered are described in the photo essay above.

Seeing Through the Sea