Geologist John Templeton recently spent a year on Norway's west coast trying to understand how rocks now at the surface made an epic journey deep into Earth's interior and back during the growth and subsequent collapse of the ancient Caledonian mountains. 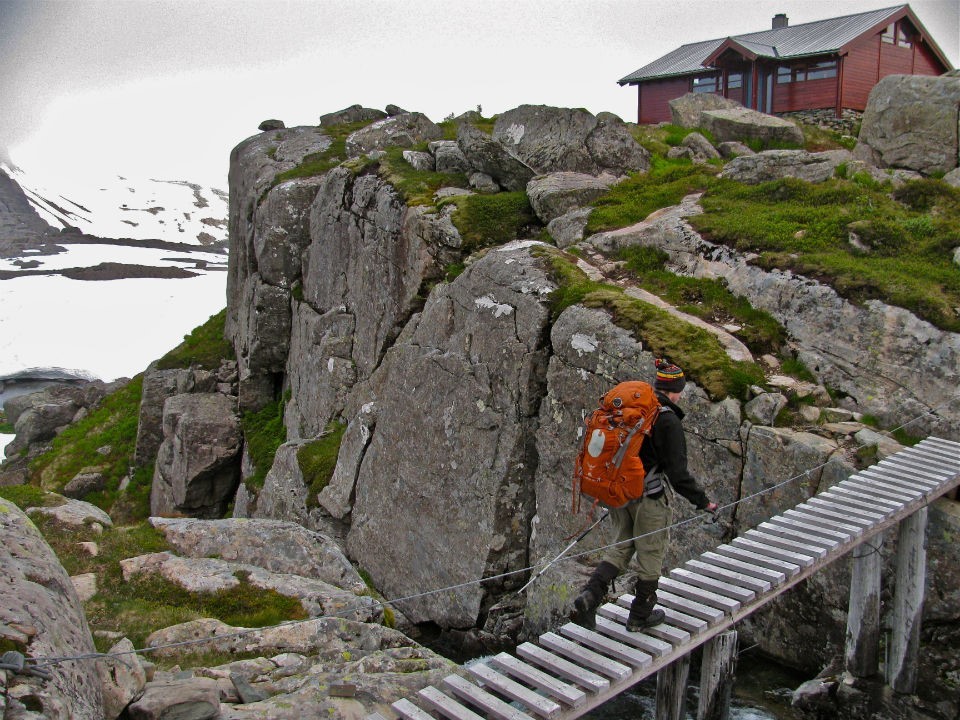 The Norwegian Caledonides are geologically connected to the mountains of Scotland, Greenland and the U.S. Appalachians. Before the breakup of the supercontinent Pangaea, they formed a continuous range. Templeton traveled to Norway in 2012 on a one-ye 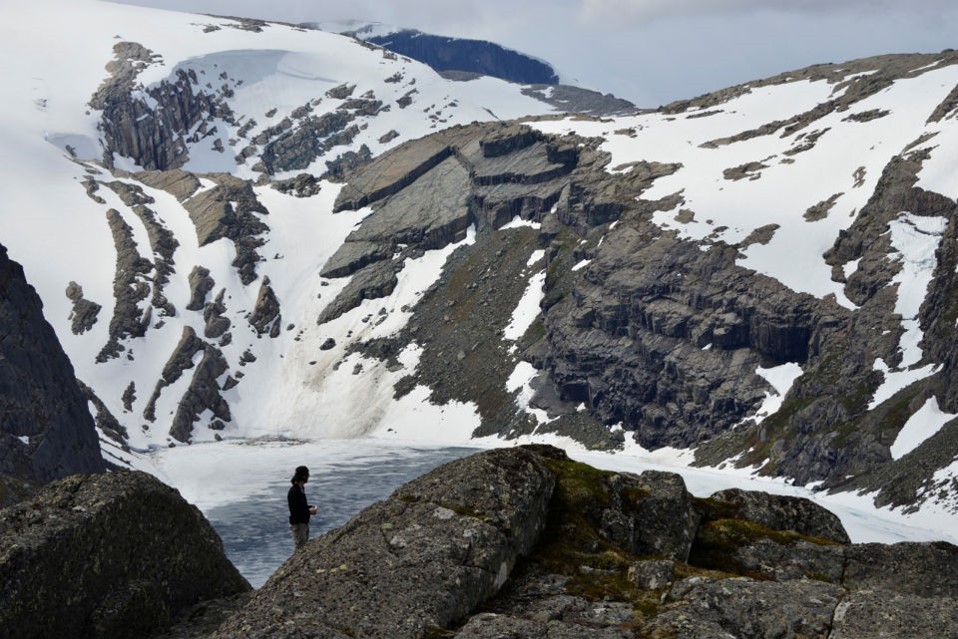 The Caledonides formed in the collision of two earlier continentsâversions of North America and Scandinavia-Russia--about 430 million years ago. But tectonic forces soon pulled the mountains apart, creating a network of smaller mountains and val 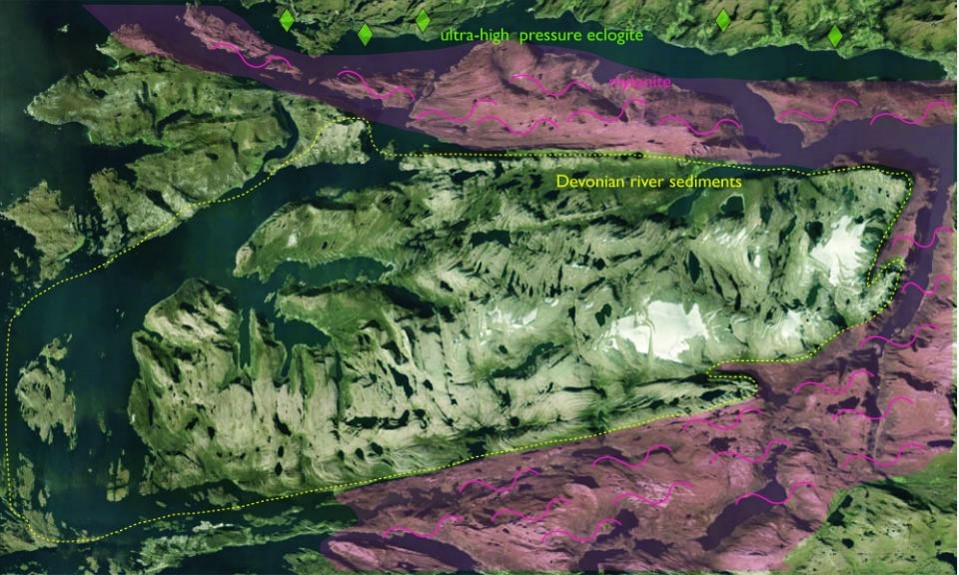 The Hornelen Basin, in southwestern Norway, is an ideal place to study the collapse of the Caledonides from about 405 million years ago to 380 million years ago, because layers of sand deposited during this time are well preserved. The sandstone sits 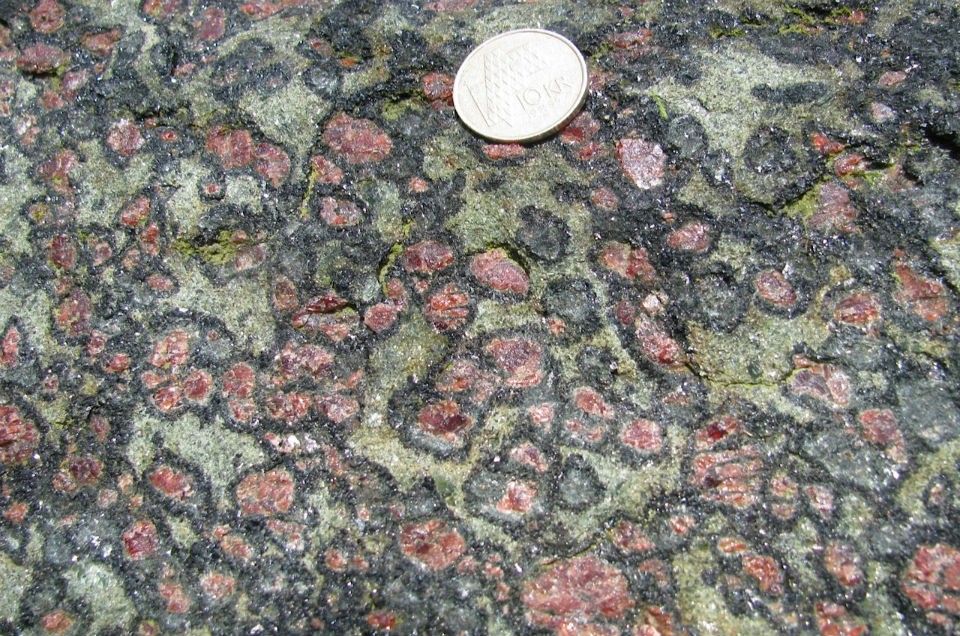 Studded with red garnets and green pyroxenes, eclogite is sometimes called âChristmas rock.â Formed in earthâs mantle, as parts of Norway were thrust deep under Greenland, the minerals are evidence of the rockâs epic journey into 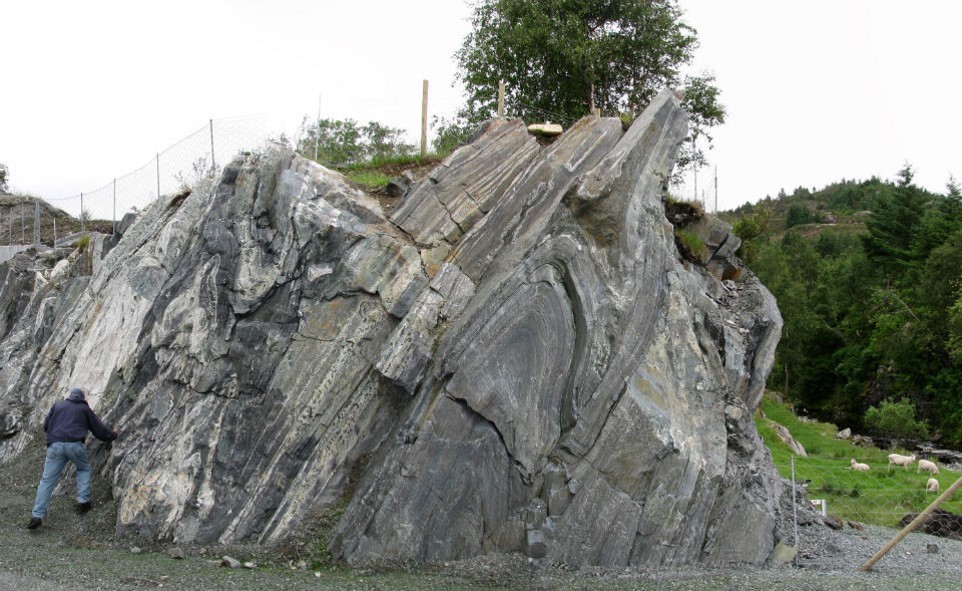 The eclogite traveled back to the surface on a conveyor belt of rock called mylonite. In the outcrop here, itâs possible to see how the mylonite once âflowed,â at high pressure and temperature, in a state similar to Silly Putty. (Templ 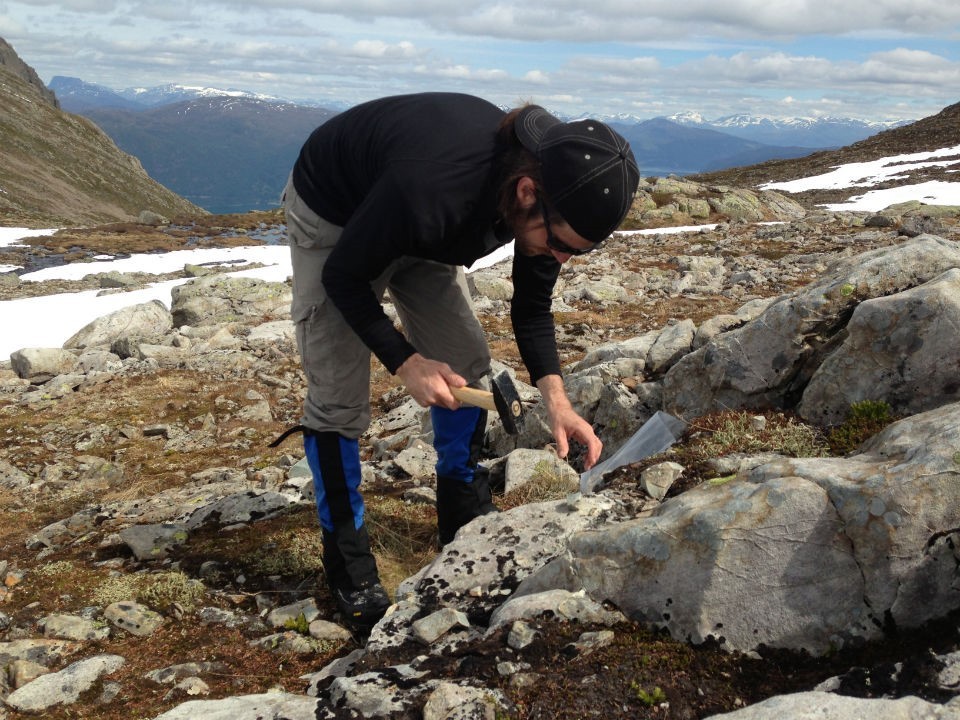 Sandstones deposited by ancient rivers as the Hornelen basin filled are key to understanding the tectonic events that shaped these mountains. Hammering away samples of sandstone, Templeton will search the sand grains for evidence of both eclogite and 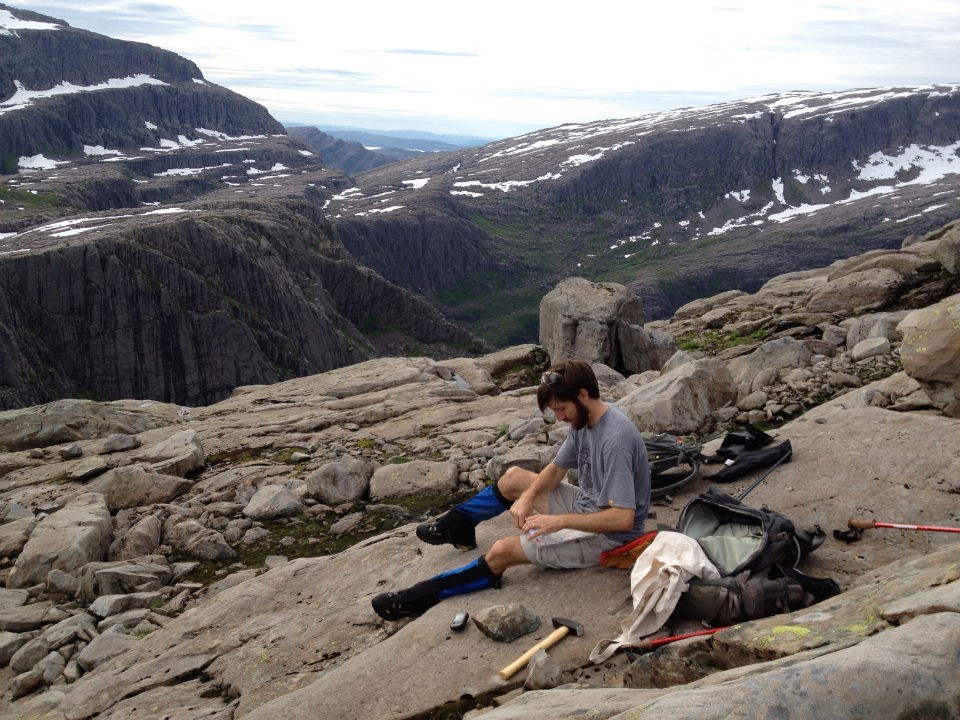 The samples are dropped into cloth bags, and their precise locations logged with GPS. In the lab, Templeton will crush the rocks and isolate grains of minerals for radiogenic dating to show how sediment composition may have changed through time. (To 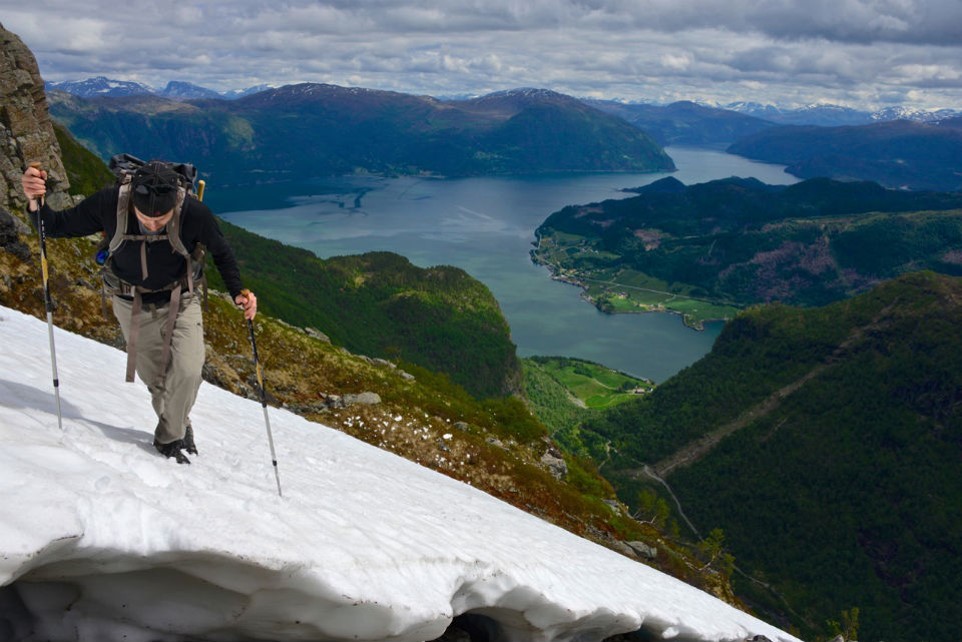 The youngest layers of the basin can be found at the top of steep slopes with breathtaking views. It was late June when Templetonâs team climbed up the steep walls of the Skjerdal valley, but a snowy traverse was still required. (Fossen) 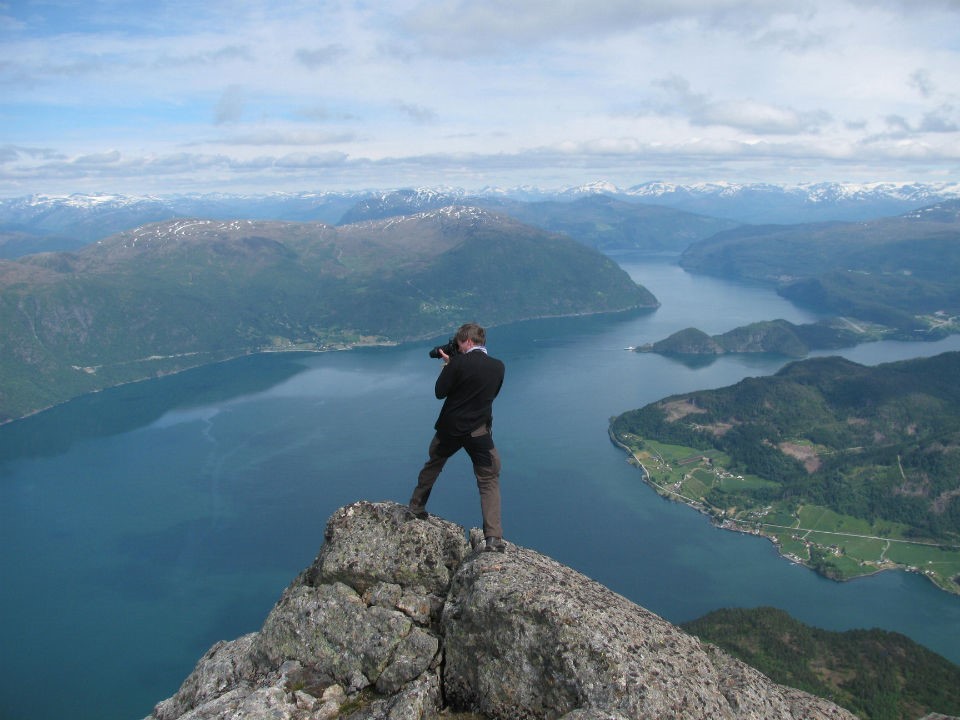 HyenestÃ¸ya, the easternmost peak in the Hornelen basin, sits high above the blue depths of Nordfjord. The team summitted this peak to collect a sample and take photos of Jostedalsbreen, Europeâs largest glacier, visible on the skyline. (Temp 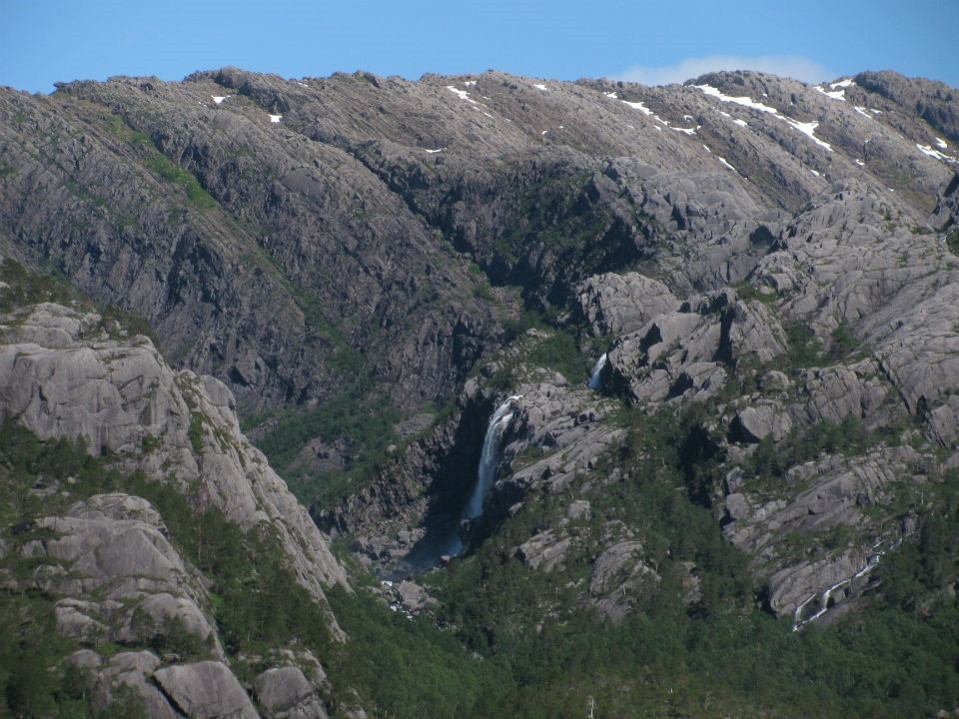 The layers of rock in the Hornelen basin are remarkably regular and well preserved, as if someone had laid out a stack of playing cards. The steps between layers are created as the layers of rock erode at different rates based on the average size of 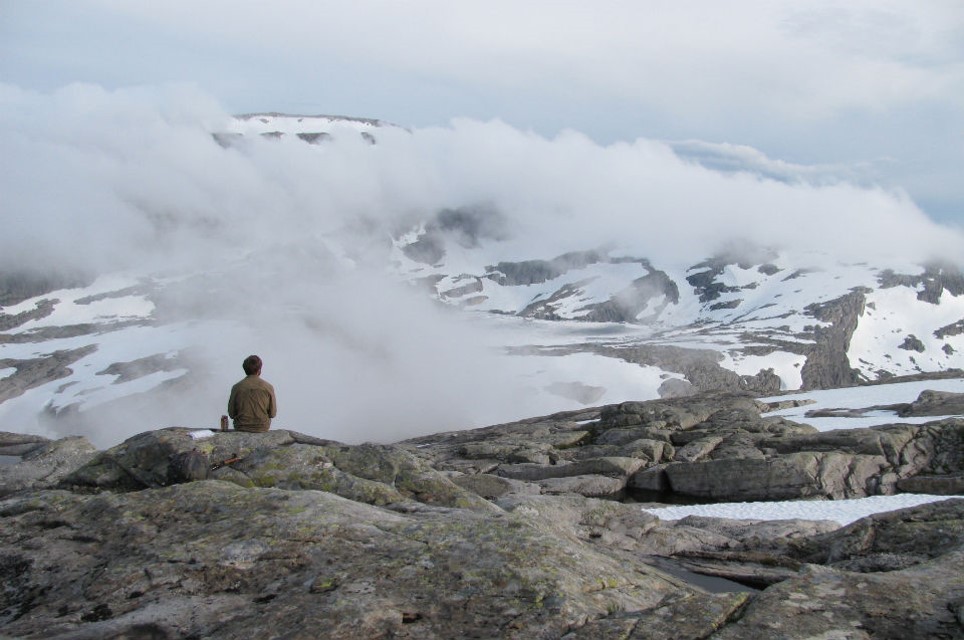 The rocks look orderly from a distance but getting around them can be tricky. After climbing past Gjegnalundsbreen glacier, Templeton caught his breath and then spent the next several hours wandering in the clouds, looking for a mountaintop cabin to

At 11pm, the clouds momentarily cleared, revealing a spectacular sunset and a rocky ridge leading to the Gjegnabu shelter, a cozy home for the night. (Templeton) 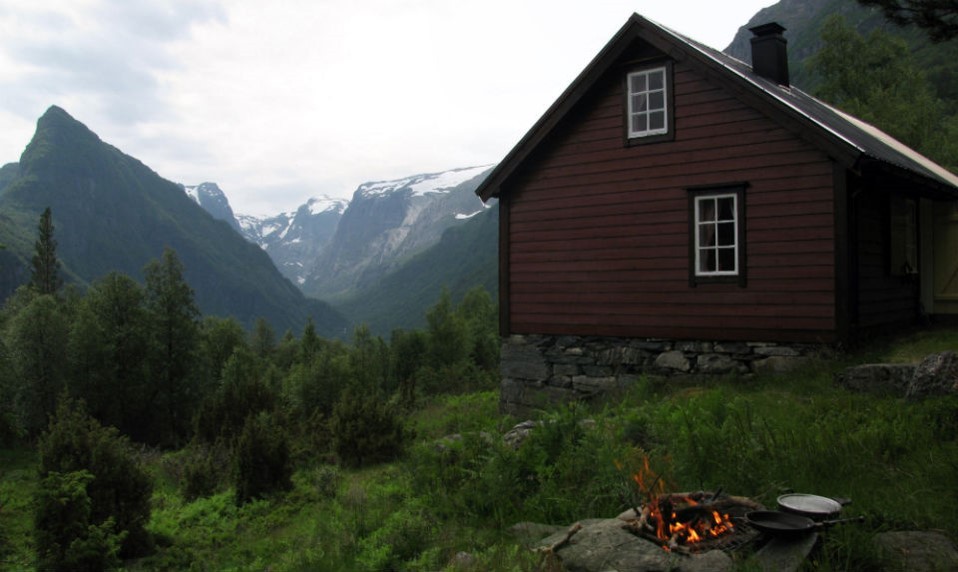 Most of the time, Templeton stayed in cabins built by the Norwegian hiking association, but one day he met a farmer who invited him to stay at his family retreat overlooking the Skjerdal valley. The family had to haul the materials used to build this 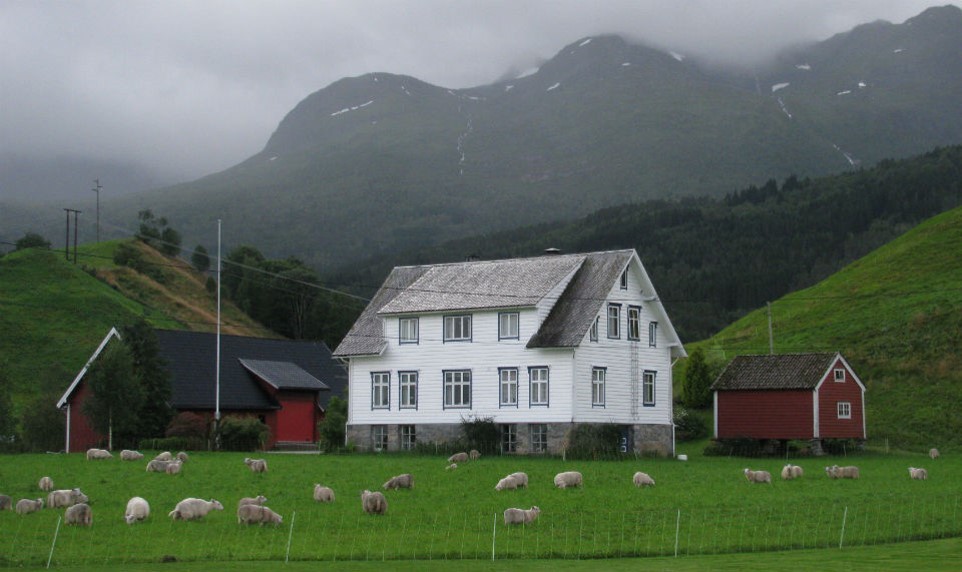 Sheep are more common than people in this part of Norway, where short growing seasons, wet weather and rocky soils make traditional farming impractical. Norwegians have long relied upon wool, fish and potatoes for survival. (Templeton) 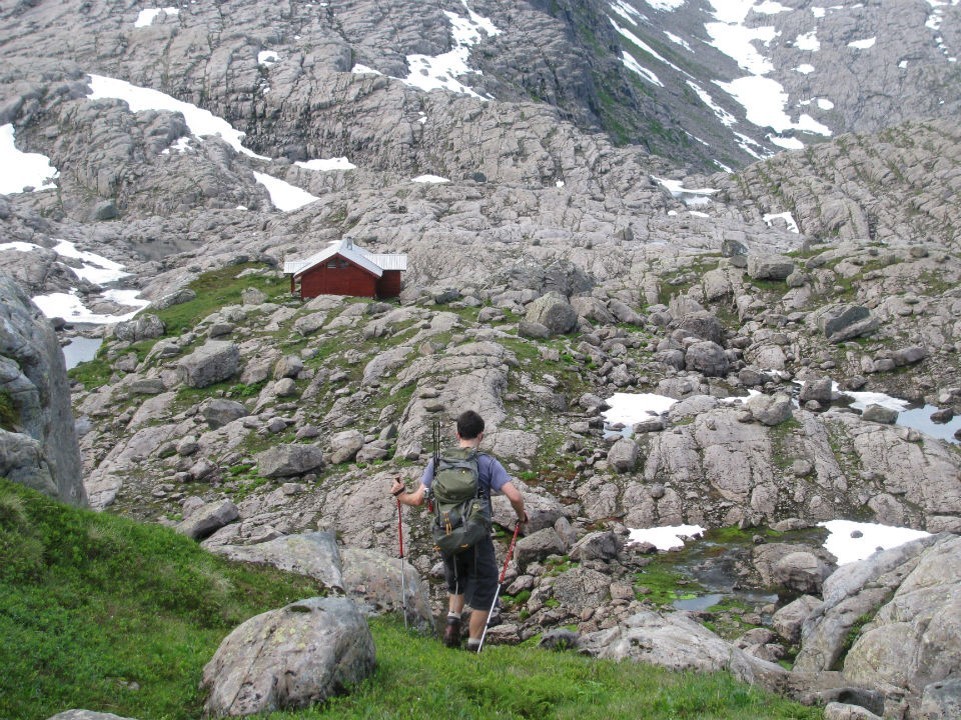 Research in these ancient mountains may help scientists understand similar processes in far-flung parts of the world, where mantle rocks have also emerged at the surface to form dramatic landscapes. Here, one of Templetonâs teammates returns wit

The rocks are thought to have started out as volcanic basalt near the surface. Starting about 430 million years ago, earlier versions of Scandinavia and North America collided with each other, thrusting up the Caledonides. In the process, the basalts, caught more or less in the middle, were thrust deep into the mantle. At depths of 60 miles or more, the basalt was cooked into a dazzling rock studded with colorful minerals, called eclogite. Then, in a dramatic reversal called âorogenic collapse,' the forces of collision switched course, and tectonic forces began to tear the continents apart, opening gaps in the original mountain chain. In the geological blink of an eye–maybe 20 million years or so–the eclogite was heaved back to the surface, where it now rests alongside sandstones formed in an ancient river valley as part of the remaining mountain chain.

The collapse of the Caledonides is thought to have been accomplished by a process called extensional faulting, in which the earth's crust stretches out, and rocks deep below the mountain chain are brought to the surface on huge tectonic faults. This stretching of the now-ancient mountains appears similar to the processes now shaping the Basin and Range Province from Utah to California — repeated rows of steep mountains separated by deep valleys, formed as tectonic forces slowly tear apart the western United States. But extensional faulting remains poorly understood, despite advances in other areas of plate tectonics theory.

Templeton, who is working on his PhD. at Lamont-Doherty Earth Observatory, spent much of his time hiking, and chiseling away rock samples in a mostly roadless region where sheep vastly outnumber people. Now, back in the lab, he is working to analyze his samples for what they can tell us about this unusual form of mountain building and destruction.