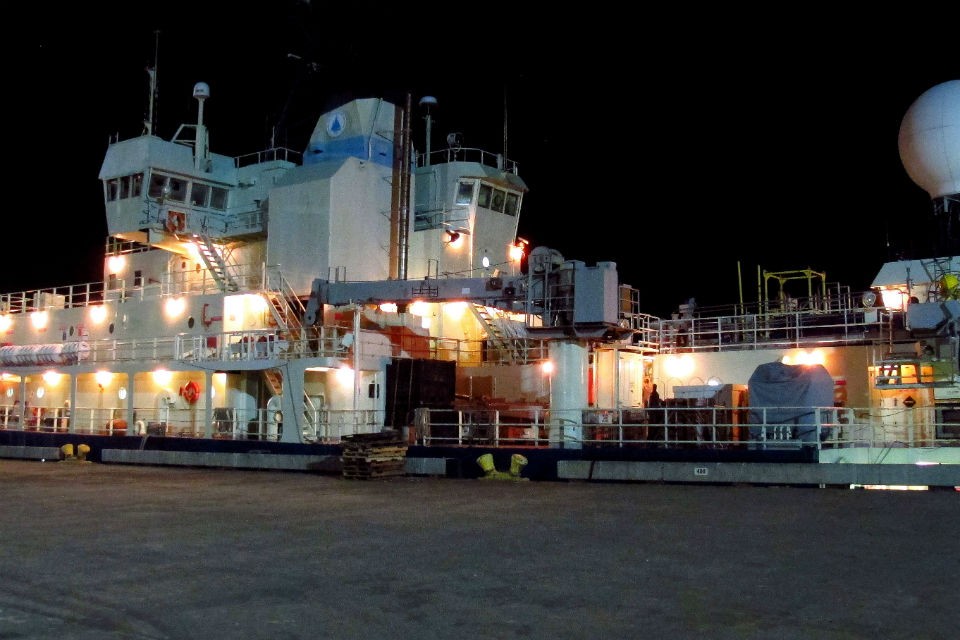 The R/V Atlantis lights up the night sky before its departure from Astoria, Oregon, for the Juan de Fuca Ridge, a submarine volcanic ridge in the northern Pacific Ocean. (Gisela Winckler) 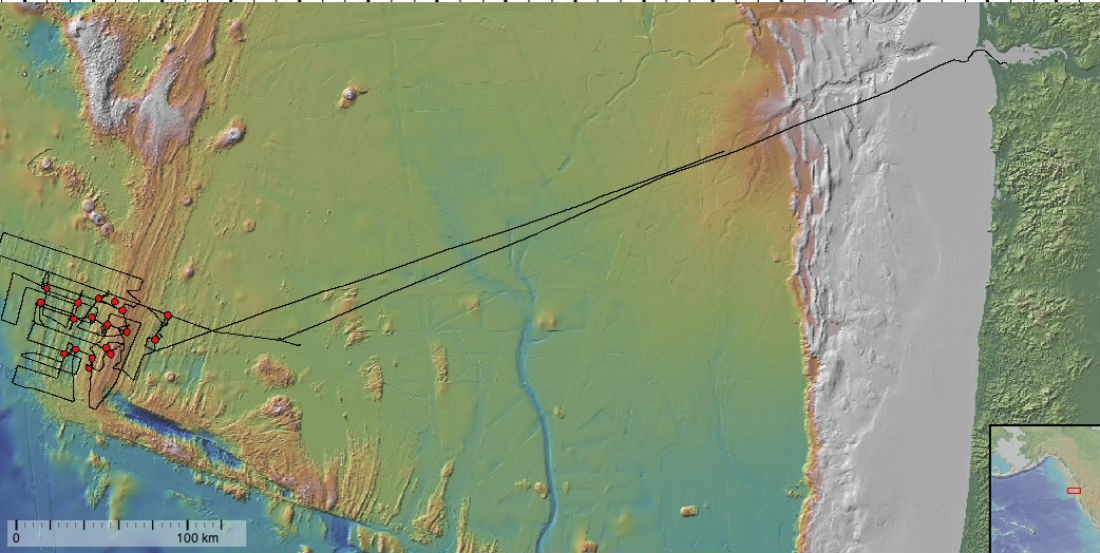 The Juan de Fuca Ridge is about 350 miles off the coast of Washington and Oregon. The R/V Atlantis would image more than 6,000 square miles of the sub-seafloor as seen by the black lines here. (Bridgit Boulahanis) 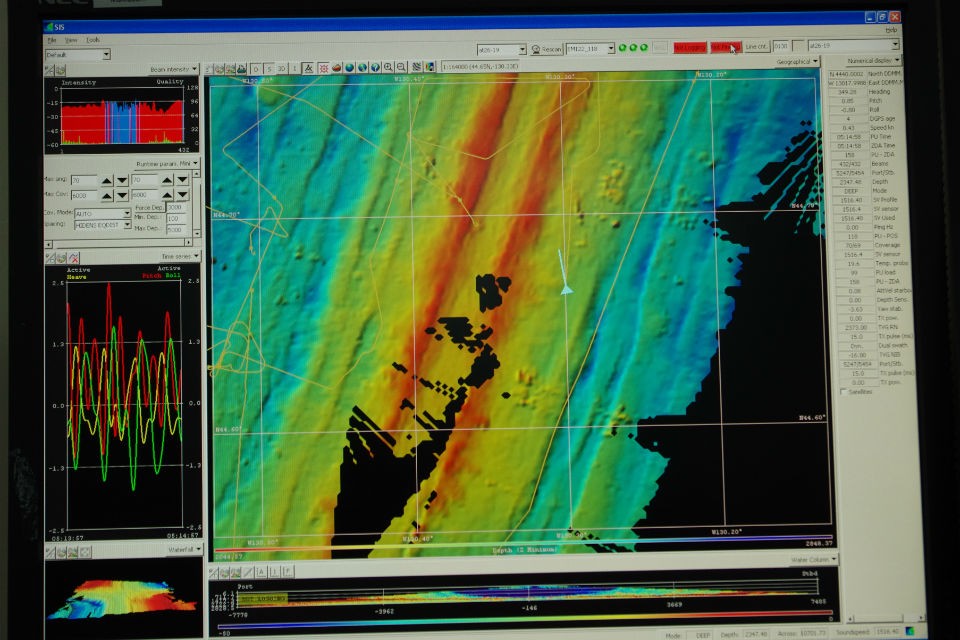 A team led by Lamont geophysicist Suzanne Carbotte and graduate students James Gibson and Bridgit Boulhanis would use pulses of sound to map the sub-seafloor in an attempt to link volcanic processes with changes in climate. (James Gibson) 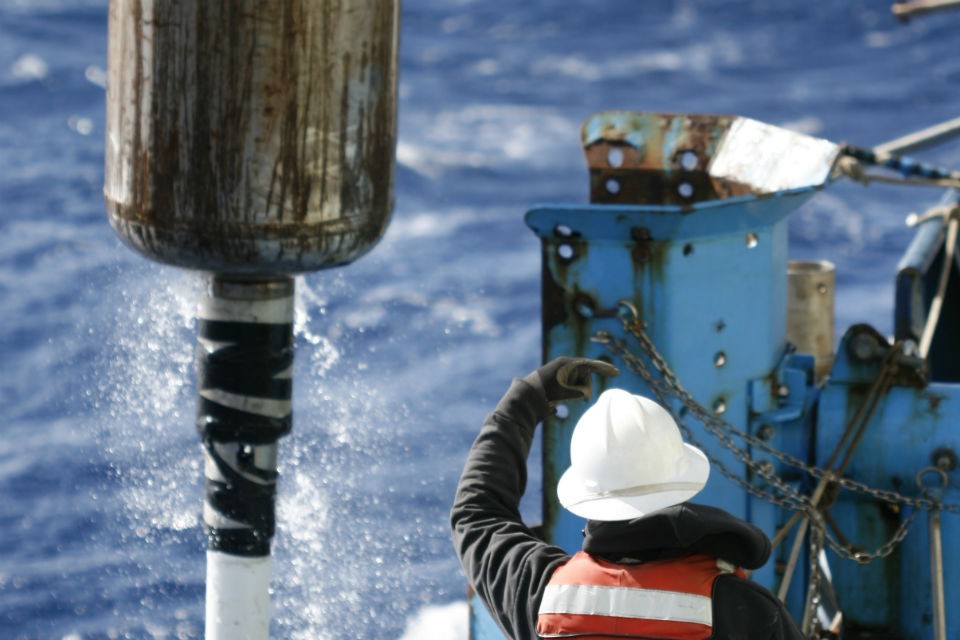 The shipâs winch operator maneuvers the coring rig into place. A hollow steel tube is dropped over a previously targeted location and a lead weight propels the tube downward. (Gene Henry)

Seafloor sediments targeted on this cruise hold a record of climate variations over the last million years, a period that included at least 10 ice ages. Here, Lamontâs Marty Fleisher positions a coring device that will release a piston corer upo 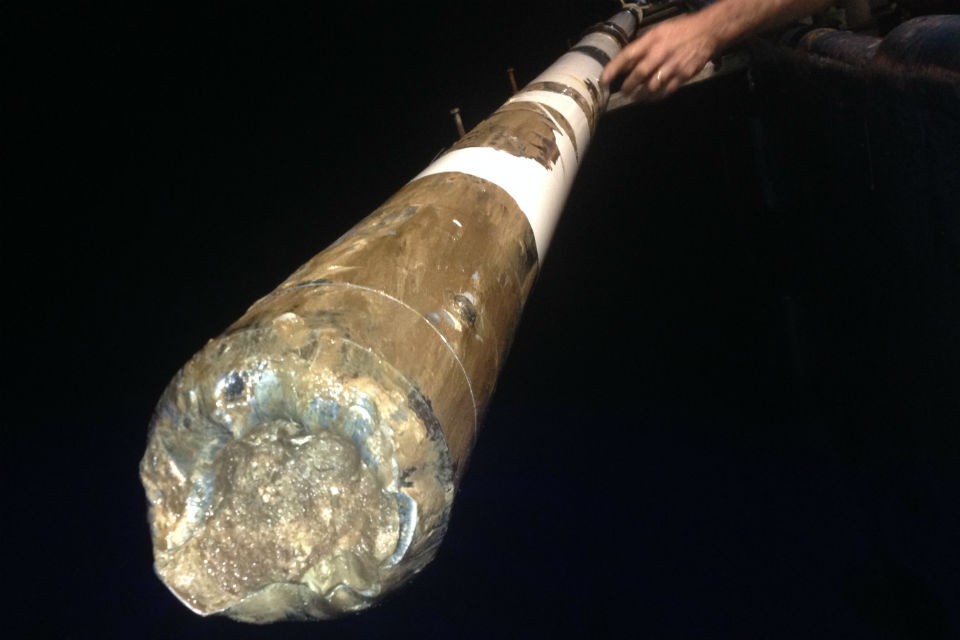 A blade at the bottom of the piston corer can slice through seafloor mud and even the bedrock below, allowing scientists to retrieve the tube of solid volcanic rock, or basalt, seen here. (Cristian Proistosescu) 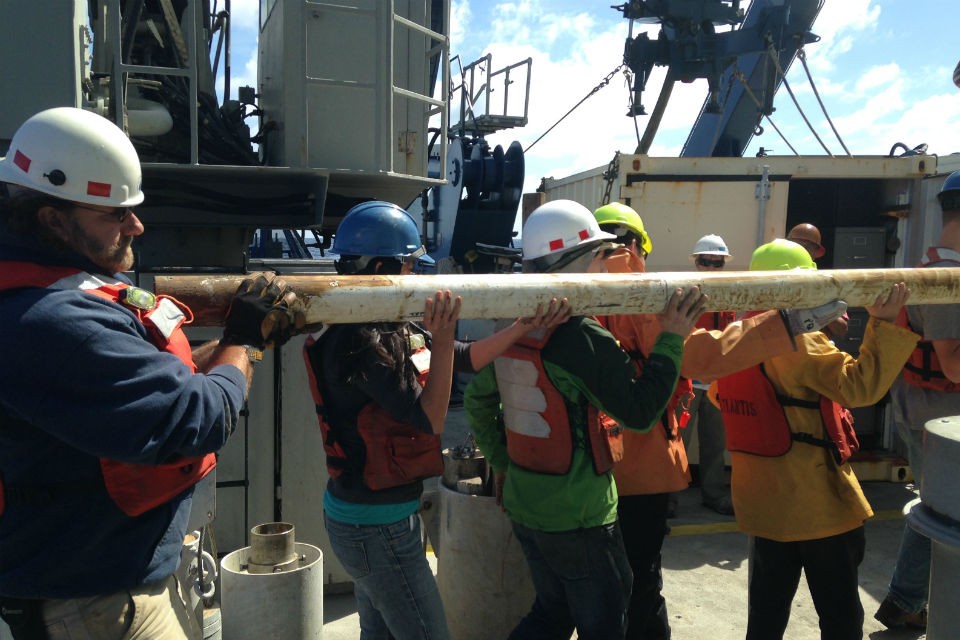 When a core comes up, itâs all hands on deck. A plastic tube full of fresh sediments is pulled out of the coring device and hauled away for cataloging and analysis. (Charlie Langmuir) 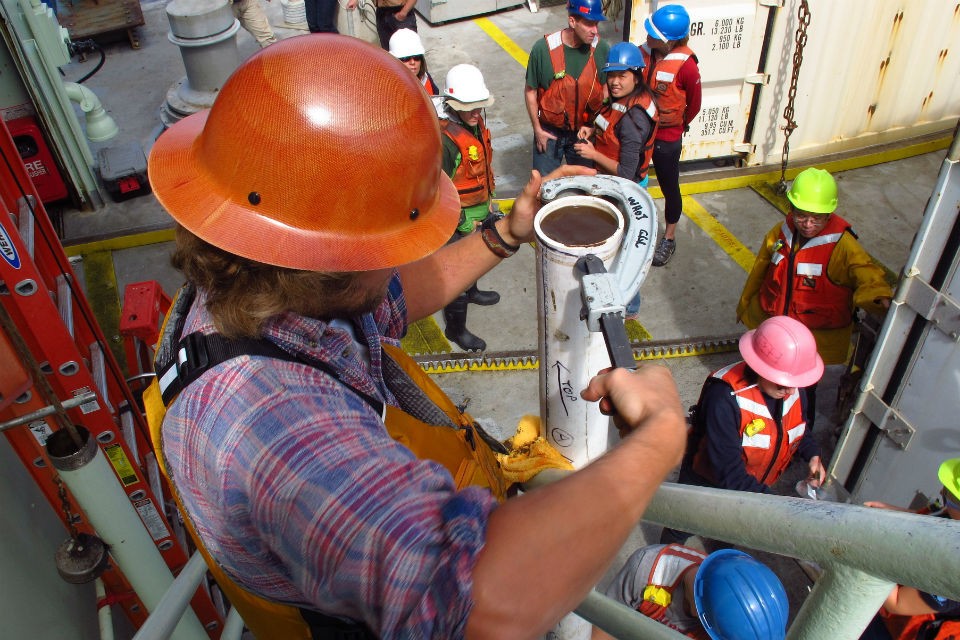 Once on deck, the cores are trimmed and sealed, as shown here by Paul Walczak, head of the coring crew from Oregon State University. After, the scientists below will cut the core into five foot sections, sealing each one and scanning it for its densi

Each core is split in halfâone side for the archives, the other, for analysis. They are photographed to preserve the sharp colors that will fade as the sediments react with oxygen. (Gene Henry) 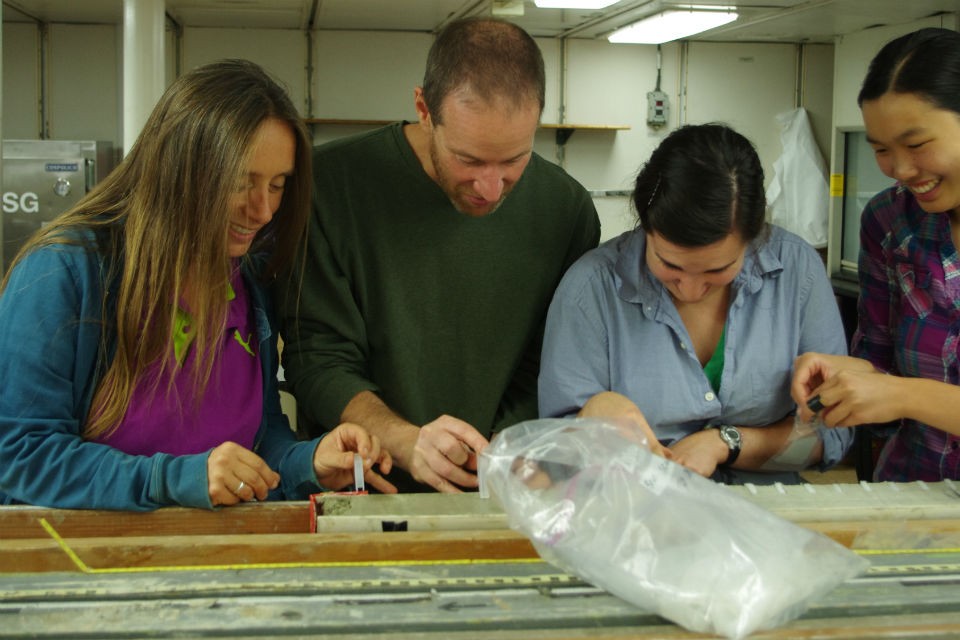 In the lab, a wide variety of sediment cores are photographed and cataloged. Here, Lamontâs Gisela Winckler, Jerry McManus, and Kassandra Costa, and Harvardâs Florence Chen, scoop away samples from a fresh core. (Jennifer Middleton) 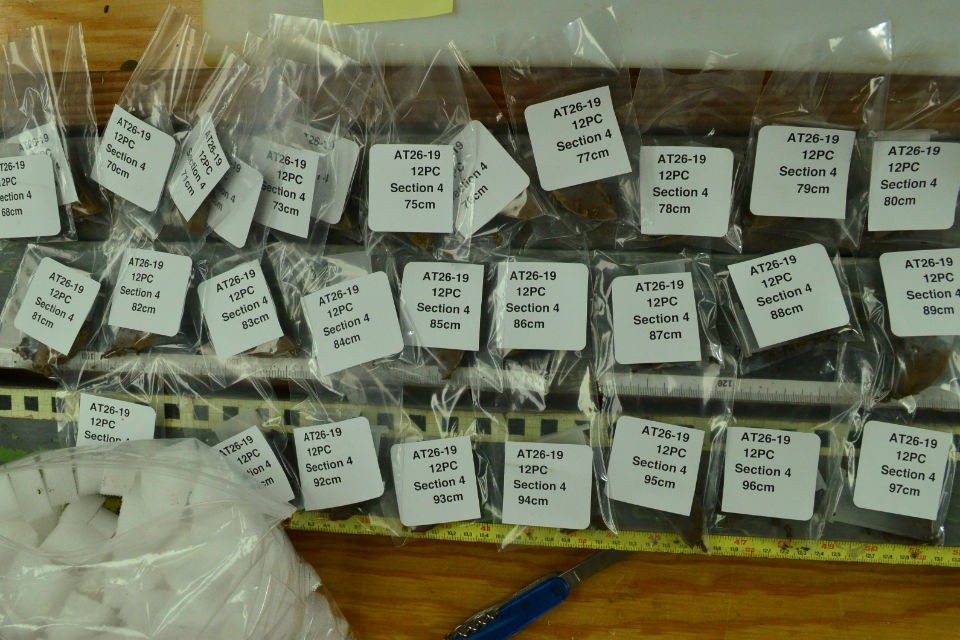 The main target in these samples are the fossils of one-celled creatures that once lived on the seafloor. Analyzing the ratio of oxygen isotopes in their shells will put ages on the sediments and reveal how much ice was on the planet when they were a

Another type of coring device collects sediments at the seafloor surface. The tent-like structure here slows down the apparatus as it nears the seafloor, allowing six corers to gently sink into the top layer of mud without scattering the sediments. ( 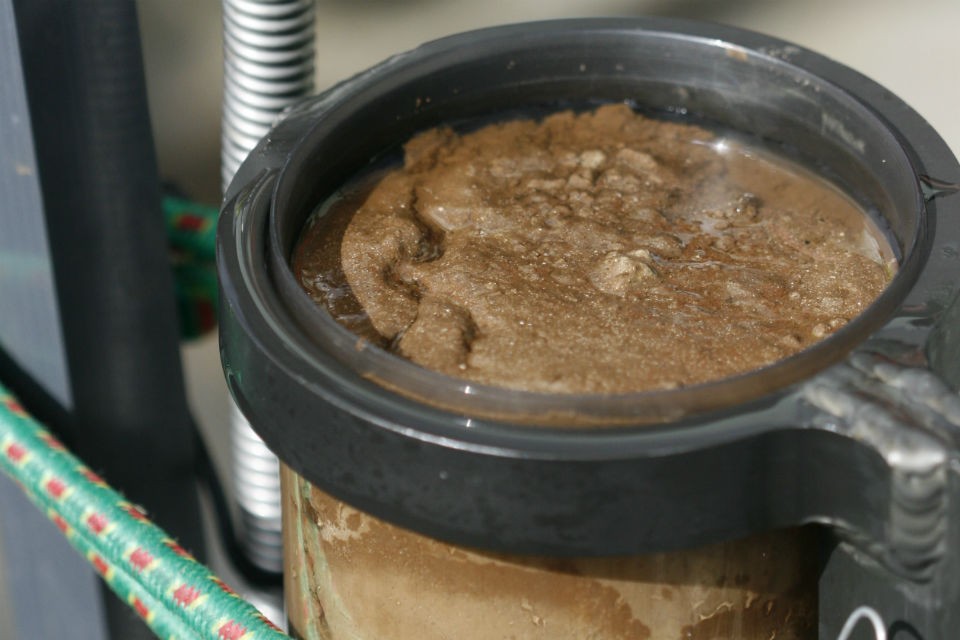 The last 10,000 years of earthâs climate history are held in these loose, fragile sediments. Human civilization developed during this time and so extra care is needed to make sure the sediments are captured properly. (Gene Henry) 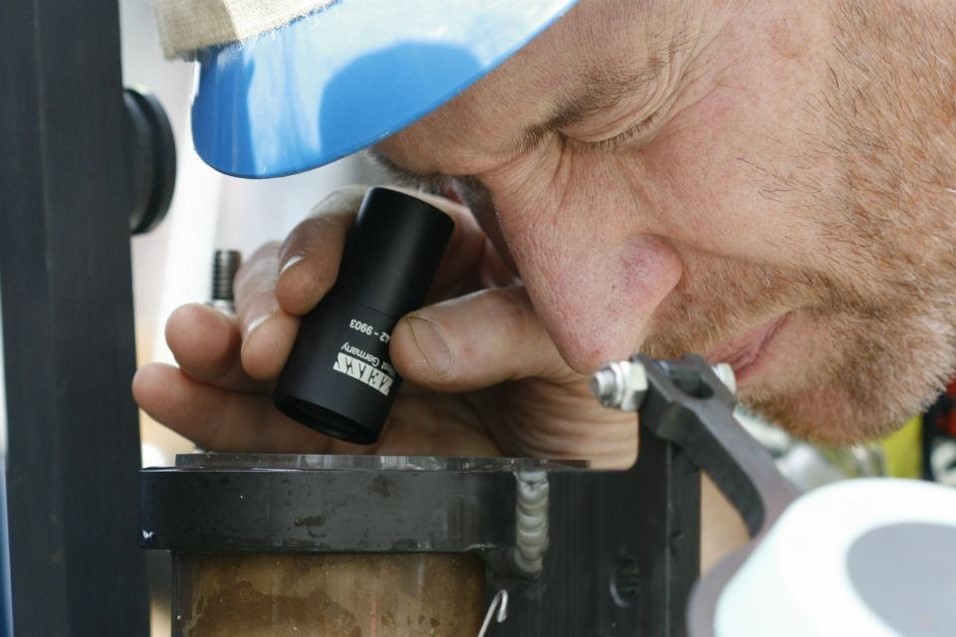 Lamont geochemist Jerry McManus looks closely at microfossils in these Holocene sediments for clues about how the regionâs climate evolved. (Gene Henry)

A third type of coring device extracts shattered volcanic rock from the sub-seafloor. The wax corer, as itâs called, smashes into the basalt and catches the glassy debris on its wax wheels. Glass chips are extracted when the wax is later melted.

As the ship cruised back to Astoria, the coring team took advantage of a rare moment of downtime to pose with the Multi-Corer tent before it was packed away for the next expedition. (David Ferguson) 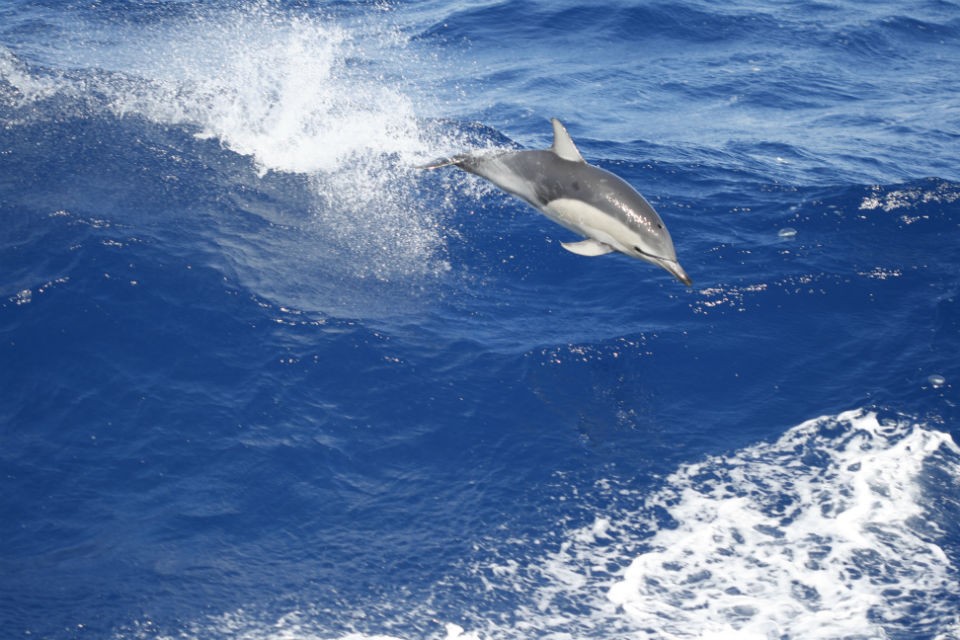 Two hundred miles from Astoria, the ship was joined by a pod of dolphins. As they played in the shipâs wake, surrounded by the vast sea, it was possible to imagine a chapter in earthâs past coming into view. (Gene Henry)

Ice ages come and go. So do pulses of volcanic eruptions on land and at sea, maybe, on roughly the same time scale. Could the two be related? A recent two-week oceanographic expedition aimed to find out. The overarching hypothesis: As water accumulates on land in the form of massive ice sheets, the pressure of the overlying ice puts a lid on volcanoes. A corresponding drop in sea level allows volcanic vents on the seafloor to let loose. Then, when the planet warms, causing ice to melt and sea levels to rise, hydrothermal venting is suppressed, while volcanoes on land become more active. These interconnected processes, which release carbon dioxide during eruptions on both land and sea, may help regulate global climate in a seesaw fashion. To investigate this idea, a team of scientists from Lamont-Doherty Earth Observatory and Harvard University sailed last fall off the Pacific Northwest aboard the R/V Atlantis. They drilled into sediments holding geochemical tracers of past hydrothermal eruptions to see if they have varied on ice-age like cycles . They also sampled sub-surface lava deposits, and mapped the underlying seafloor. On land, in a project led by Harvard, old lavas in the Cascades Range of Washington, Oregon and California were sampled and dated. Part of the Volcanoes, Ocean Ice and Carbon Experiments (VOICE) project, the investigation is a collaboration between Lamont-Doherty, Harvard, Penn State, the U.S. Geological Survey and Oxford University. Gisela Winckler, a Lamont-Doherty geochemist on board, organized photos taken during the cruise into the above slideshow.

Dealing With Rain and Rats