Greenland Glaciers Retreating Faster than Any Time in Past 9,500 Years

Over the last century, glaciers in Greenland have been retreating quickly âÂ at a rate at least twice as fast as any other time in the past 9,500 years, according to a new study. The study also provides new evidence for just how sensitive glaciers are to temperature changes, showing thatÂ they responded to abrupt and even short-lived cooling and warming in the past that lasted decades to centuries.

To track how glaciers grew and shrank overÂ time, the scientists extracted sediment cores from a glacier-fed lake that provided the first continuous observation of glacier change in southeastern Greenland. They then compared the results to similar rare cores from Iceland and Canada’s Baffin Island for a regional view.

"Two things are happening," said study co-author William D'Andrea, a paleoclimatologist at Columbia University's Lamont-Doherty Earth Observatory. "One is you have a very gradual decrease in the amount of sunlight hitting high latitudes in the summer. If that were the only thing happening, we would expect these glaciers to very slowly be creeping forward, forward, forward. But then we come along and start burning fossil fuels and adding carbon dioxide to the atmosphere, and glaciers that would still be growing start to melt back because summer temperatures are warmer. We see that in this record."

Glaciers are dynamic and heavy. As they move, they grind the bedrock beneath them, creating silt that the glacier's meltwater washes into the lake below. The larger the glacier is, the more bedrock it grinds away. Scientists can take sediment cores from the bottom of a glacier-fed lake to see how much silt and organic material settled to the lake bottom over time, along with other indicators of a changing climate. They can then use radiocarbon dating to determine when more or less silt was deposited.

The Kulusuk Lake sediment cores allowed the scientists to track changes in the lake’s two glaciers going backÂ 9,500 years. Before the 20th century, the fastest rate of glacier retreat reflected in the core was about 8,500 years ago, at a time when the Earth's position relative to the sun resulted in more summer sunlight in the Arctic.

The history captured in the Kulusuk Lake sediment cores shows that a warming period started about 8,500 years ago, when the glacier's erosion rates fell rapidly, suggesting the glacier was getting smaller. Then, about 8,200 years ago, temperatures began to cool rapidly and erosion rates increased again. That cooling period has been well documented by other studies and has been connected with large changes in ocean circulation. Shortly after that advance, around 8,000 years ago, the glaciers wasted away and may have disappeared entirely â little erosion appears in the sediment core between 7,000 and 4,000 years ago, according to the study, appearing in the latest issue of the European Geosciences Union journal Climate of the Past. During the warm period, the core also shows a large increase in organic matter from plants growing in and around the lake.

Relative rates of change in the size of the Kulusuk glaciers. The red bars show 105-year intervals where glaciers were retreating on average. Blue shows advances. 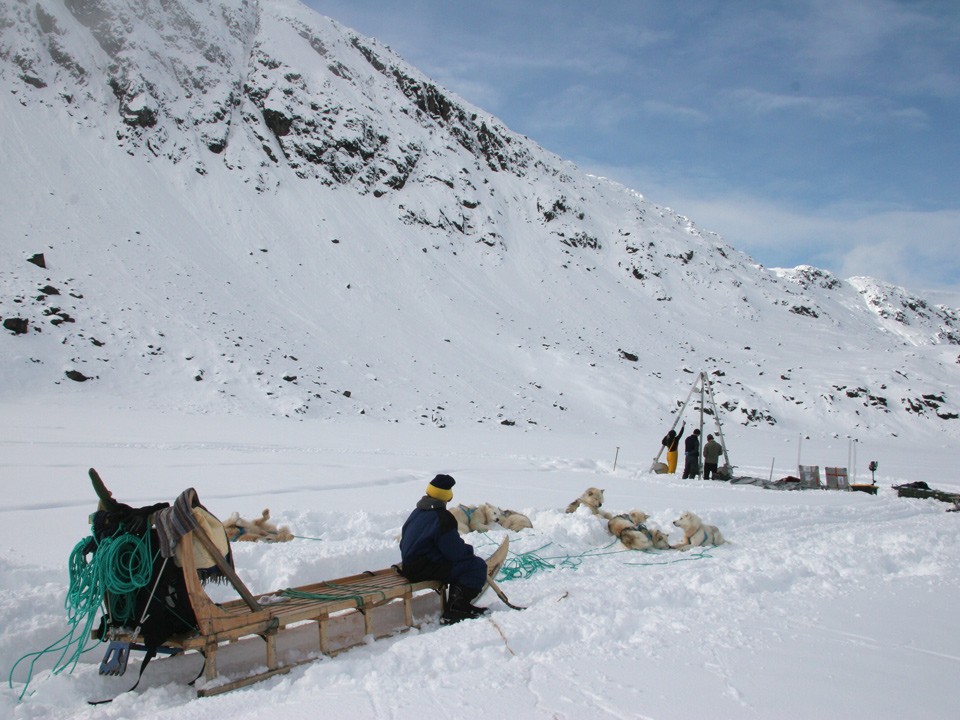 To study the advance and retreat of glaciers, scientists extracted sediment cores from the bottom of glacier-fed Kulusuk Lake in Greenland. (Photo courtesy of William D'Andrea) 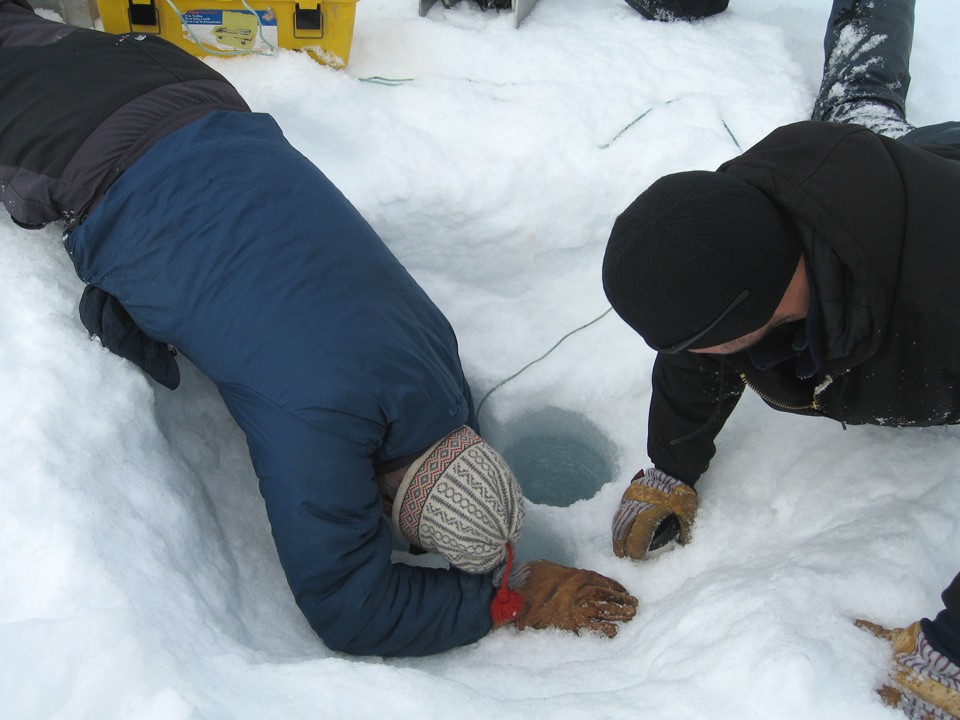 Extracting the sediment core starts with clearing out a hole through the lake's 3-foot-thick ice. (Photo courtesy of William D'Andrea) 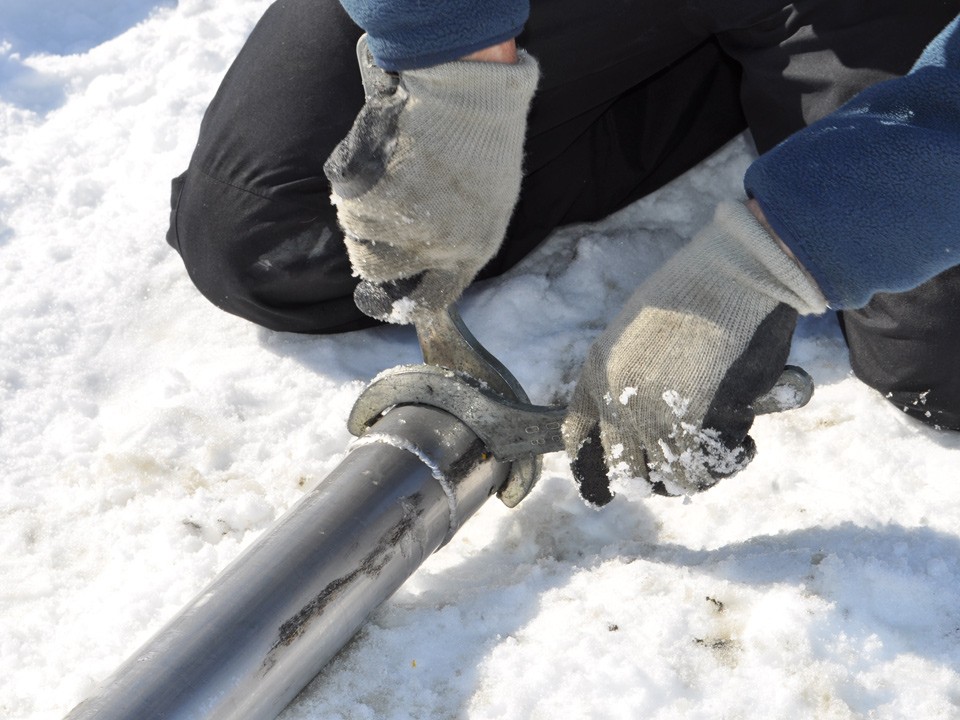 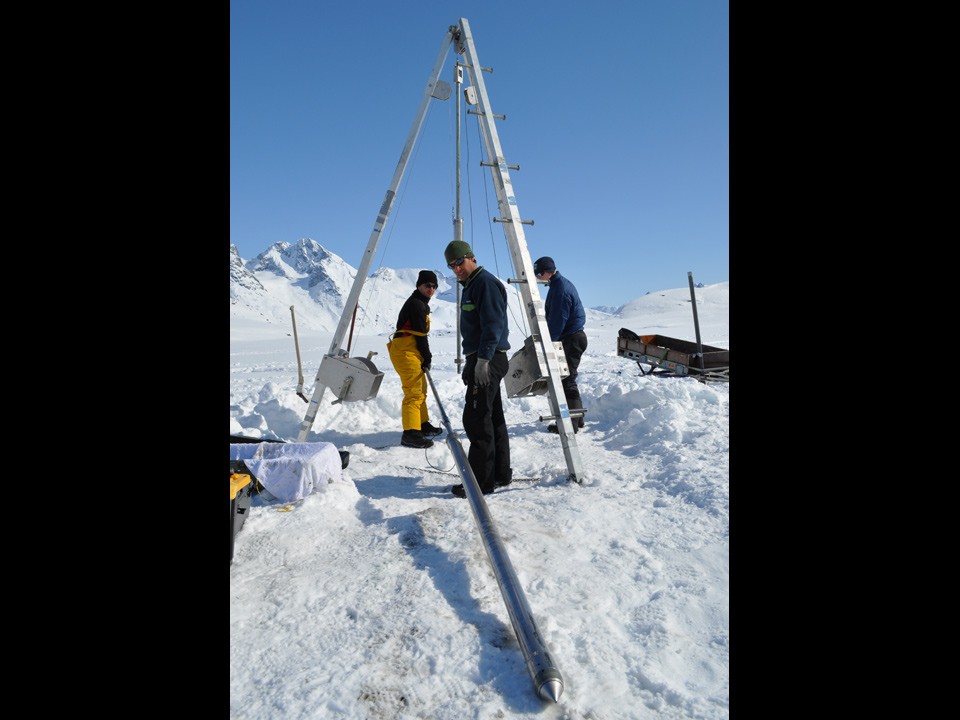 Researchers standing on the frozen lake inspect the coring tube that will be lowered to the lake floor and driven into the sediment below. (Photo courtesy of William D'Andrea) 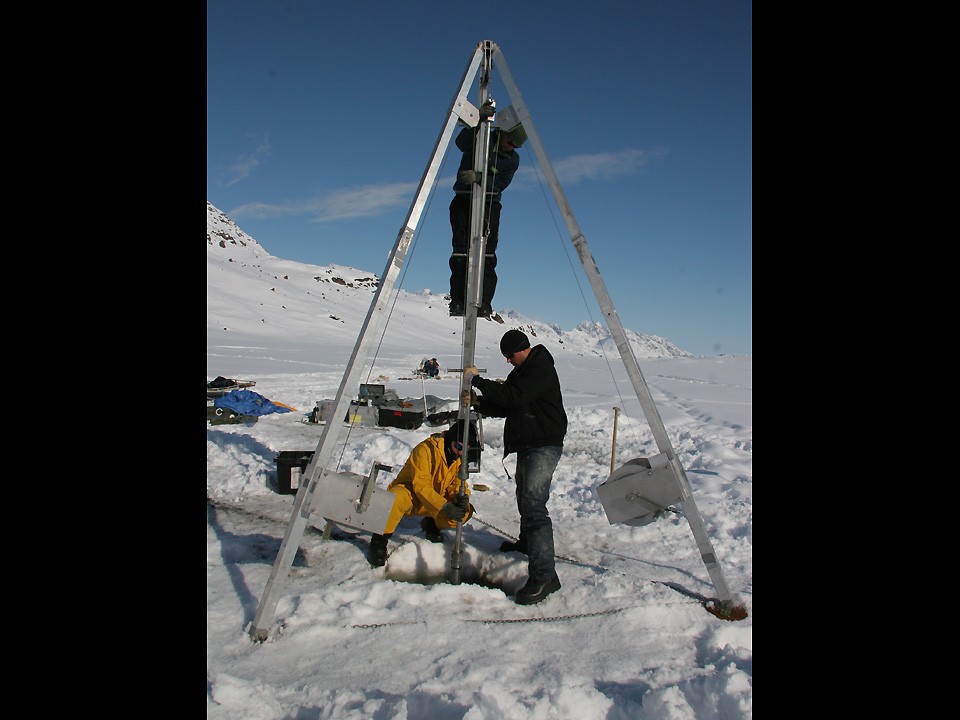 Once the tube is driven into the sediment, special equipment is used to raise the core through 70 meters of water. (Photo courtesy of William D'Andrea) 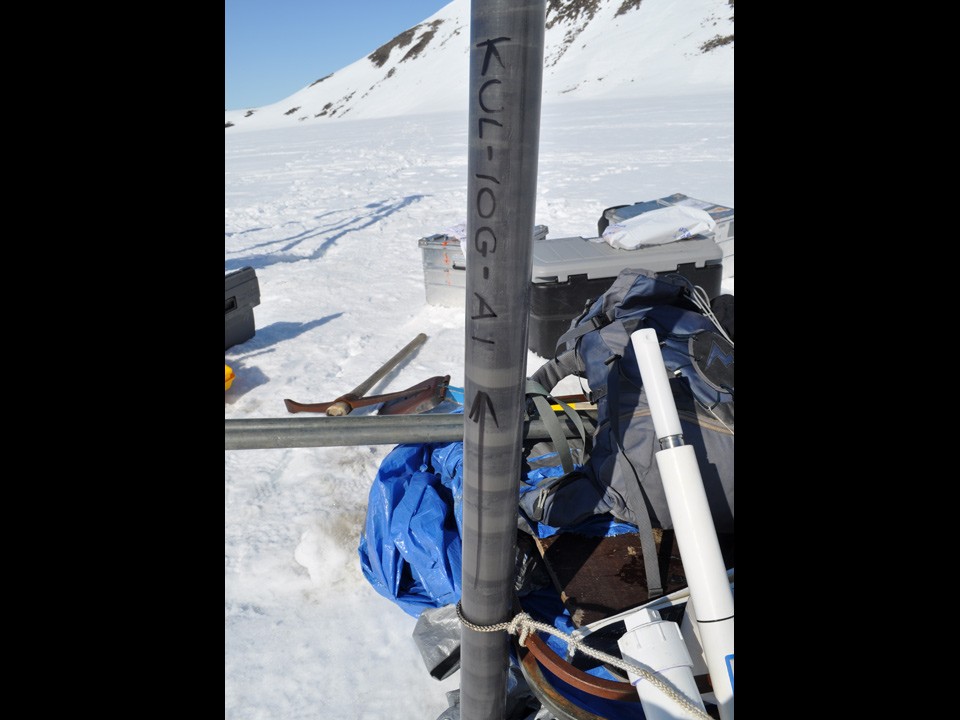 This sediment core, just collected from Kulusuk Lake, awaits transport back to the base camp. (Photo courtesy of William D'Andrea)

When the glaciers began growing again, about 4,000 years ago, they experienced a series of growth pulses that reveal their sensitivity to change. The glaciers expanded in bursts, advancing quickly, retreating briefly, and then expanding farther â until about 100 years ago, according to the study. “This shows that there are internal responses within the climate system that can make glaciers grow and shrink on very short time scales. They're really dynamic systems, which we have not had much evidence for prior to this,” D'Andrea said.

The pulses of growth match cooling periods documented in ocean sediment cores and in the continuous cores from Iceland and Baffin Island, suggesting that glaciers have responded in sync across the North Atlantic for at least the past 4,000 years, the authors write.

Understanding how glaciers melt and how ice melted in the past is a critical component to understanding past and future sea level rise andÂ improving risk assessment in the future.

The paper's other authors are Nicholas Balascio, an assistant professor at the College of William & Mary who worked on the study as a postdoctoral researcher at Lamont-Doherty Earth Observatory, and Raymond Bradley, a professor at the University of Massachusetts.

Dealing With Rain and Rats