Photo Essay: Exploring the Rocks That Join the Americas 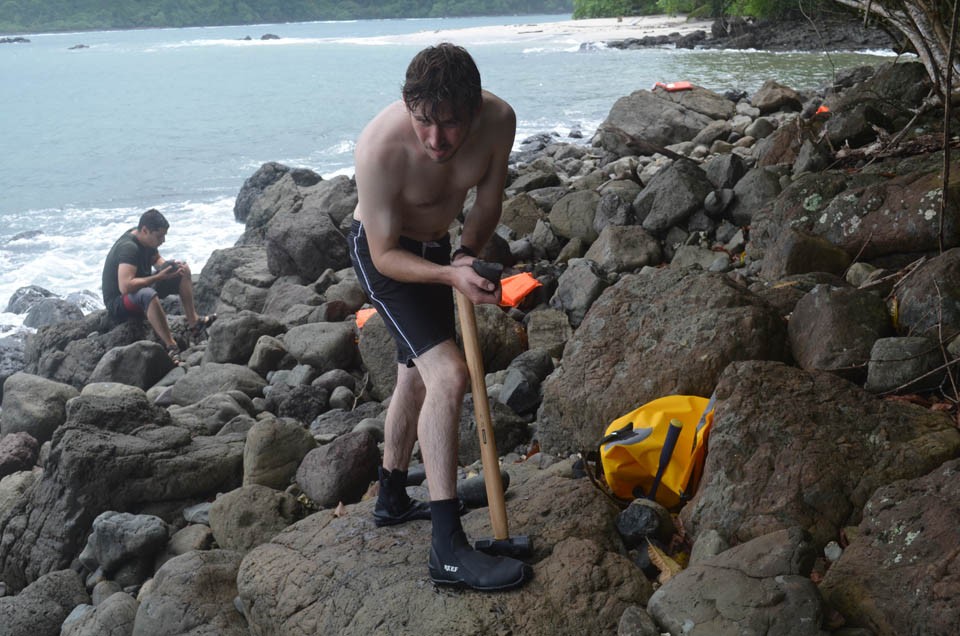 On the remote Azuero peninsula of western Panama, geologists are hunting for rocks that may help tell the story of a pivotal event in earthâs history: the formation of the slender land bridge joining the Americas. Centered on the isthmus of Pana 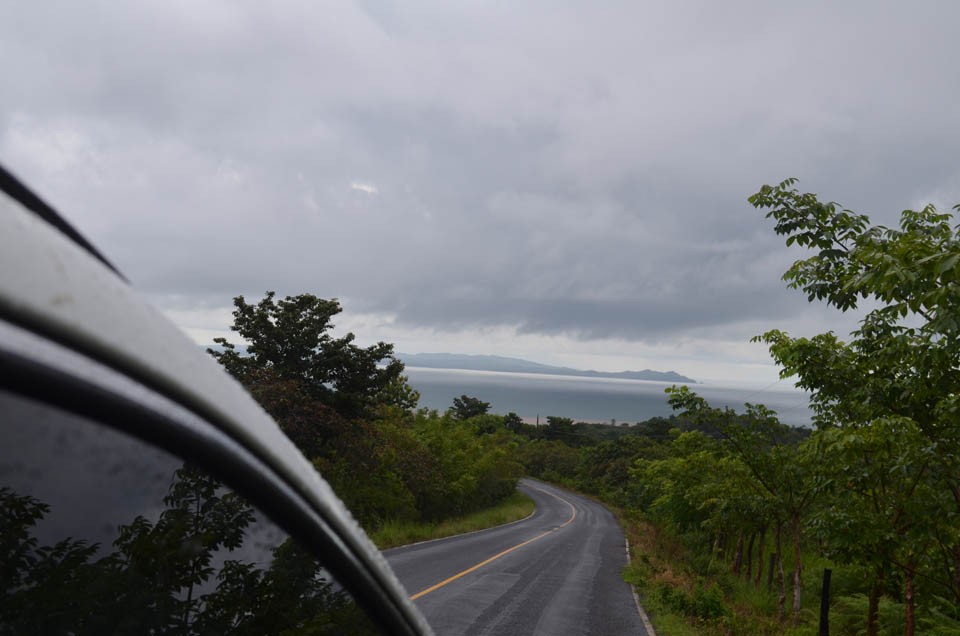 Only recently was a narrow paved road pushed through along the precipitous Azuero coast. Parts of the peninsula were once underwater volcanoes erupted from the deep earth and later pushed up onto land; this helped form the isthmus some 3 million to 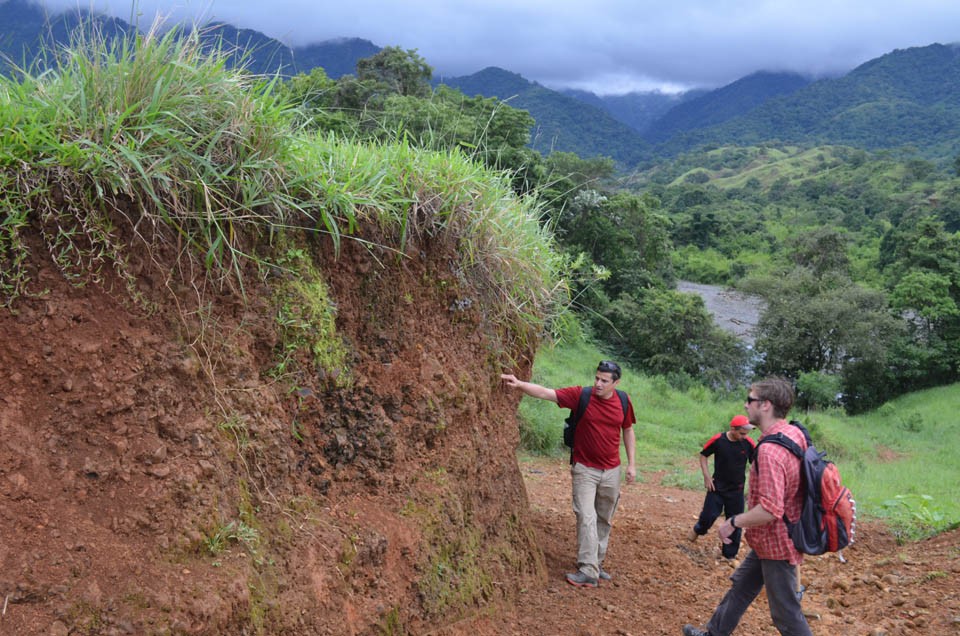 Much of the peninsula is a geologistâs nightmare: covered with dense red soils and humid forests, there is hardly a rock in sight. Expedition leader Esteban Gazel of Virginia Tech (left) assesses terrain with a local volunteer (center) and Virgi 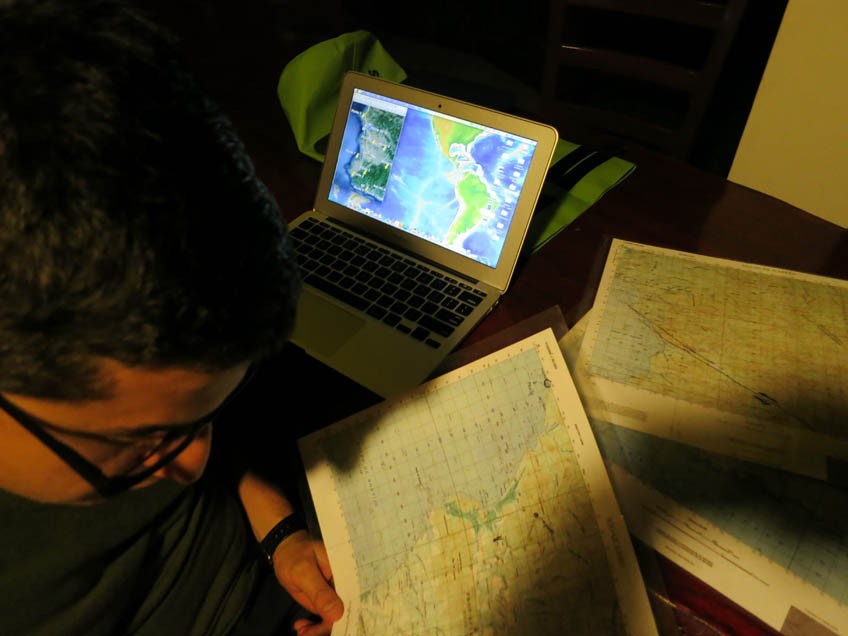 After dark, the team pores over large- and small scale maps, to pinpoint likely collection sites. 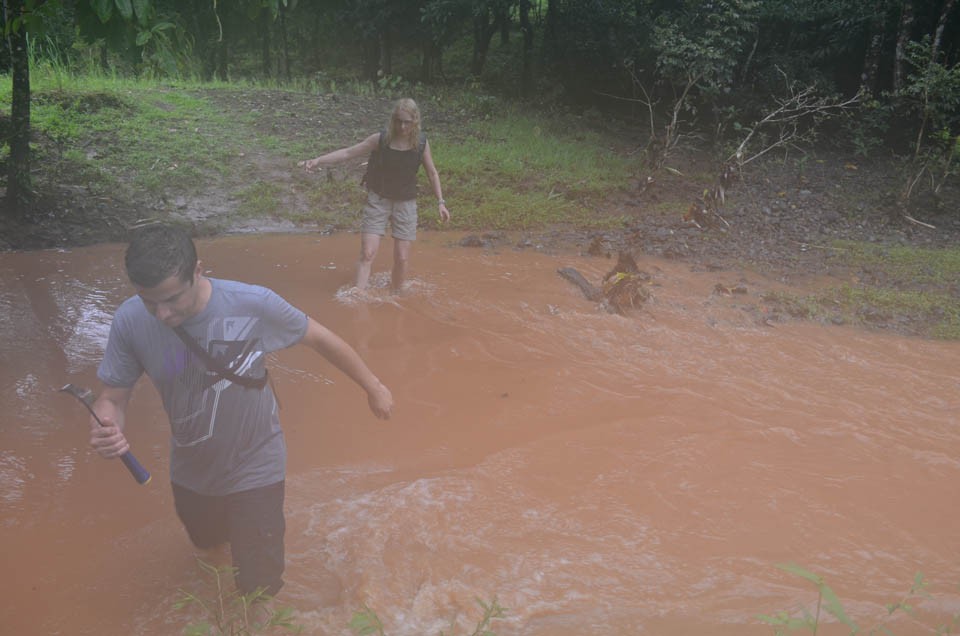 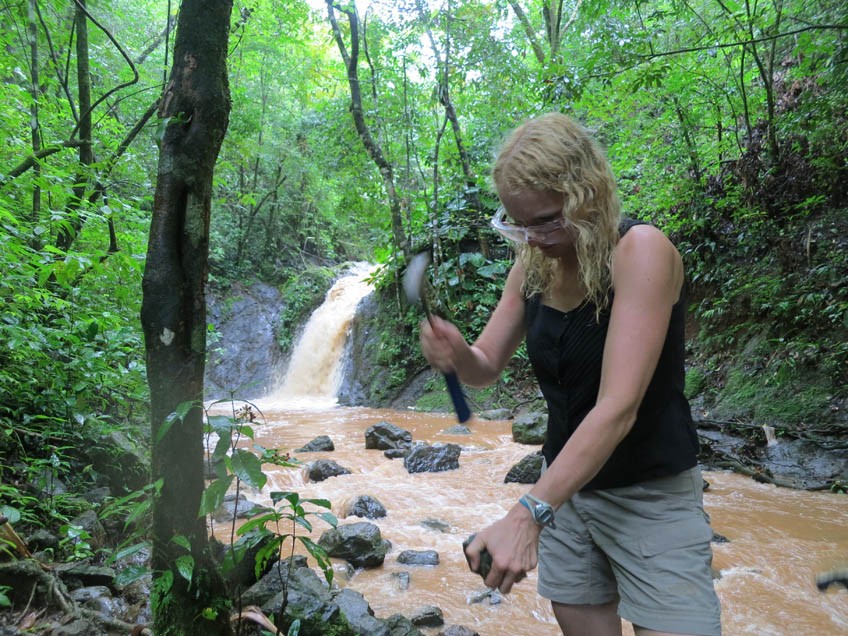 Boulder-littered creek beds into which the hills erode, and where vegetation and dirt have been swept aside, are a good place to find rocks. Class pounds at a possible sample near the hamlet of Torio. 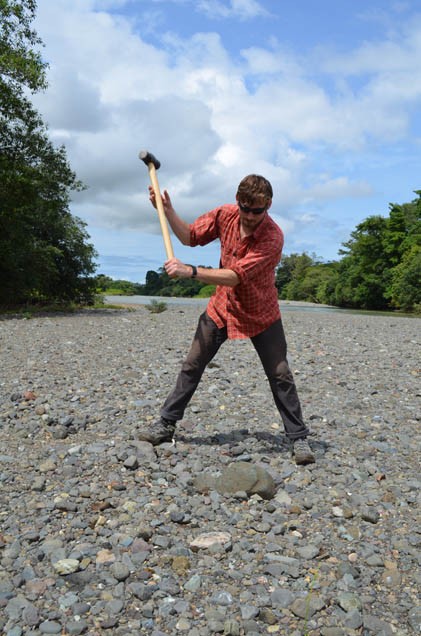 The team wants samples of picrite, an igneous rock that forms when magma from earthâs mantle begins to crystallize. But all kinds of rocks are found here, and most look alike from the outside. The only way to tell is split them open. In addition 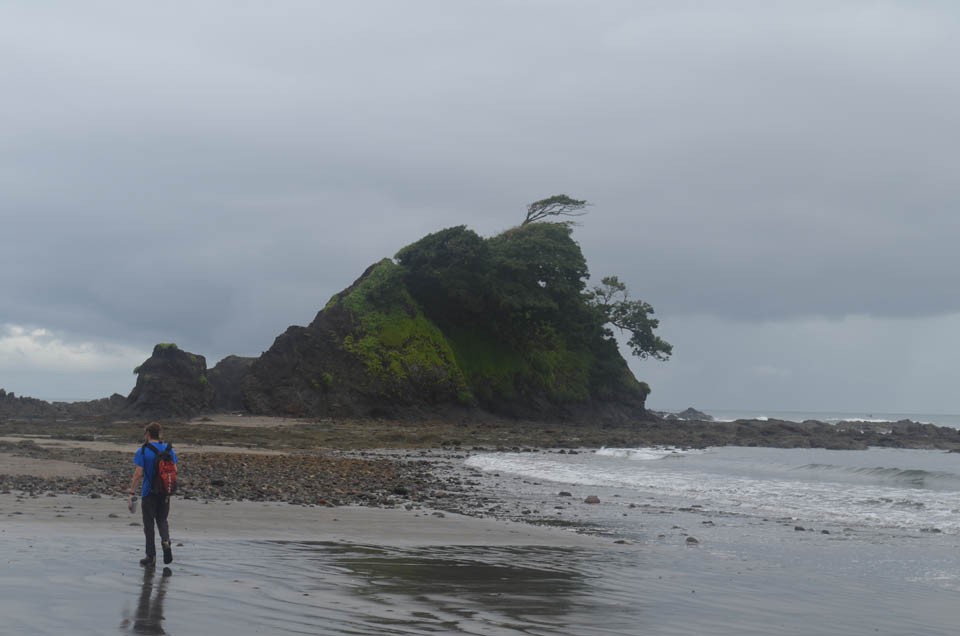 It is along the coast, with its constant tectonic uplift and violent erosion, where rocks are most exposed. But with lack of roads and other obstacles, few sites are accessible by land. This wind-torn islet was reachable at low tide after a hike thr 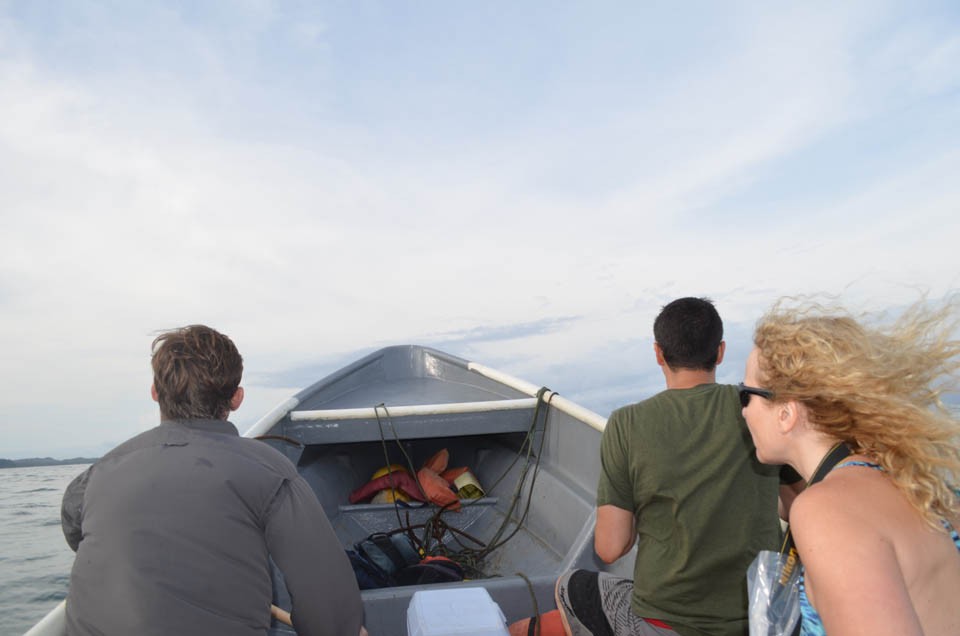 To speed coastal travel, the researchers hire a local fisherman to take them out in his boat for a couple of daysâa welcome, if windy, respite from hiking in the rain. 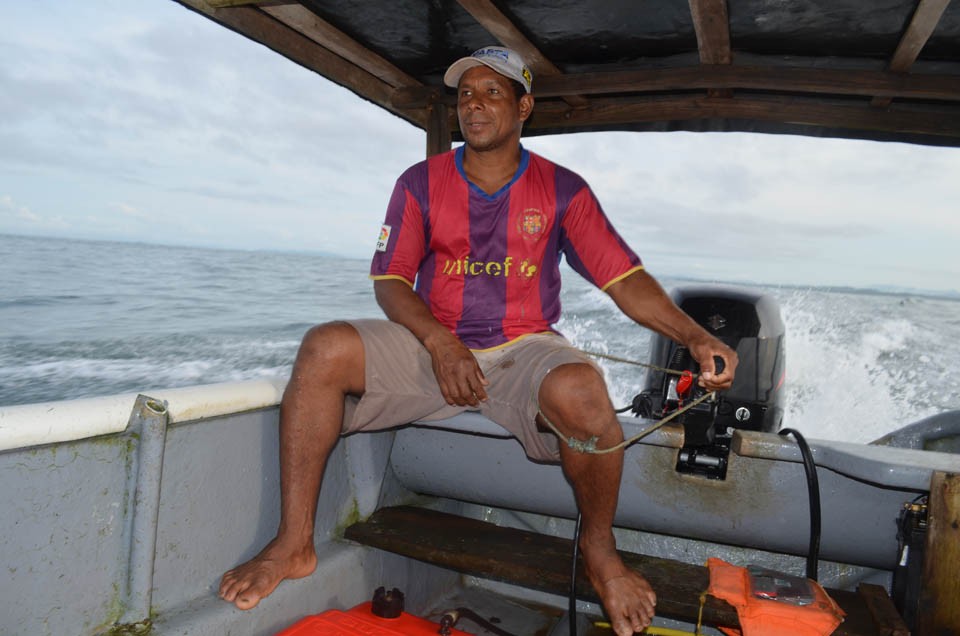 Marco, the captain, knows every reef, inlet and island around hereâessential for getting in and out safely. 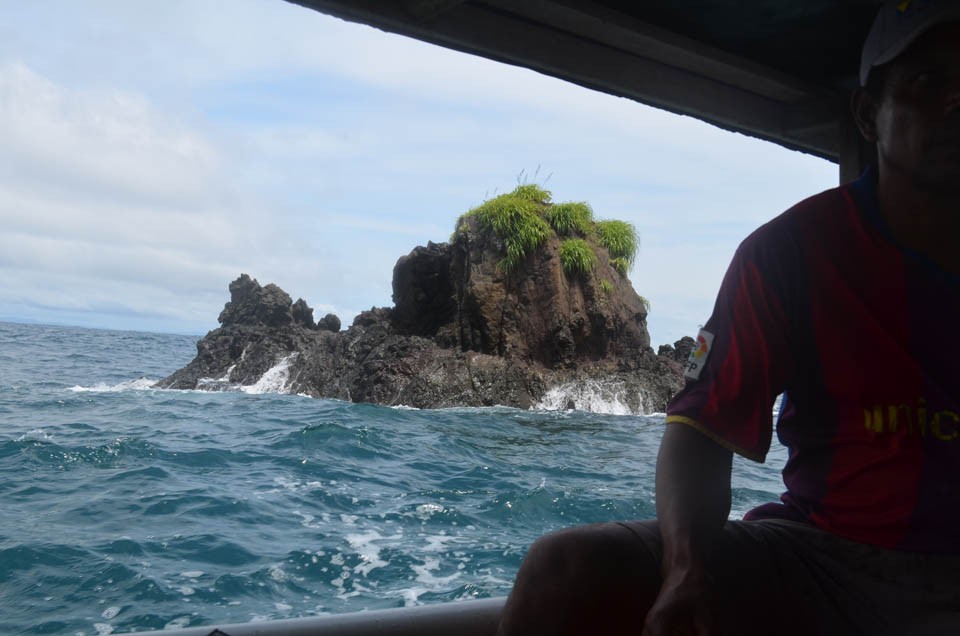 Many rock formations jut directly from the dangerously churning sea. Marco motored within yards of this small outcrop, but no one dared trying to land there. 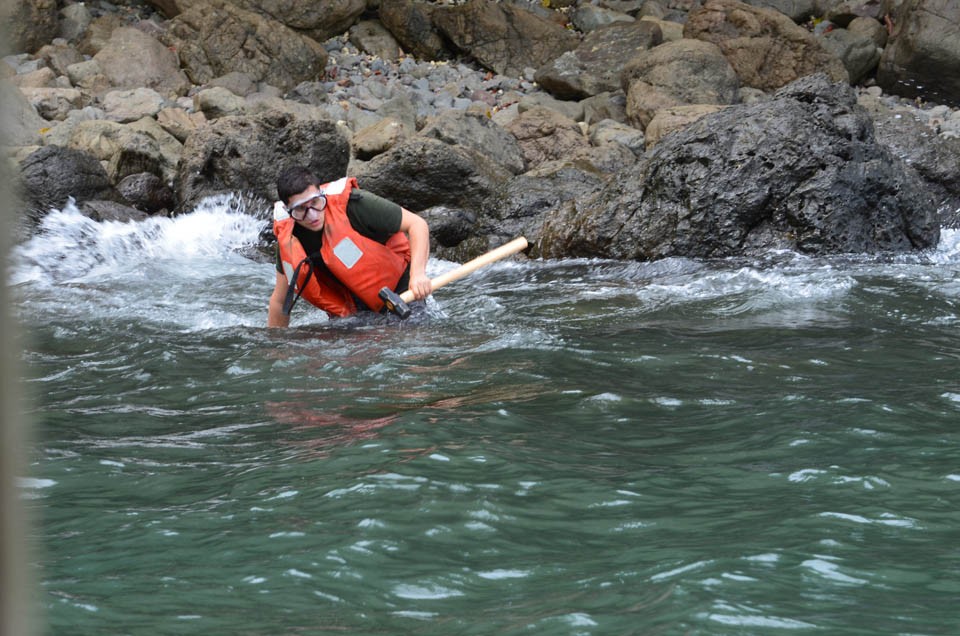 With Gazel leading the way, the team swims to an island and gets up on the rocks, lugging their tools. (Photo by Cornelia Class) 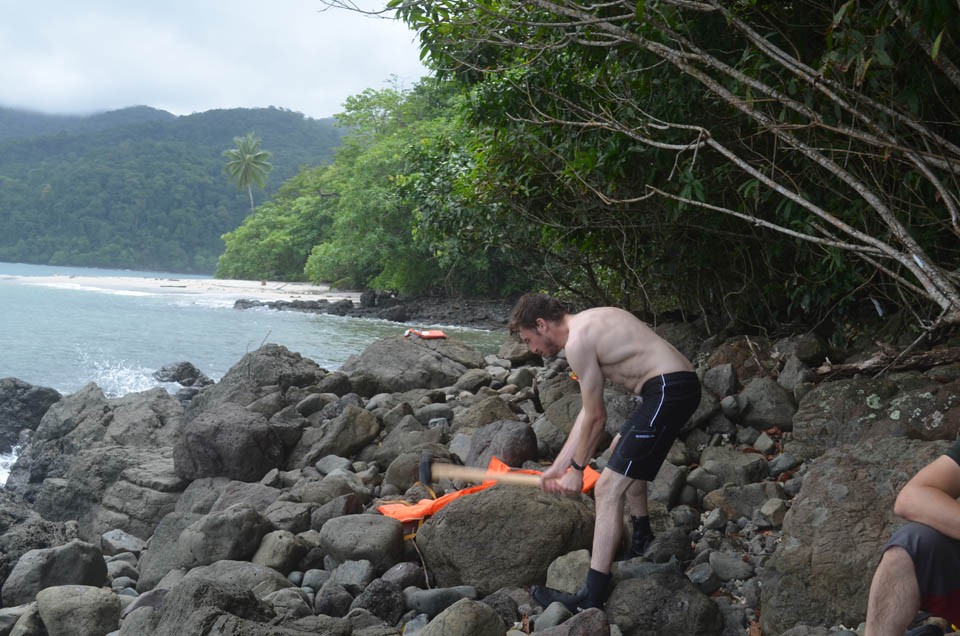 Trela takes a turn smashing boulders on the island. 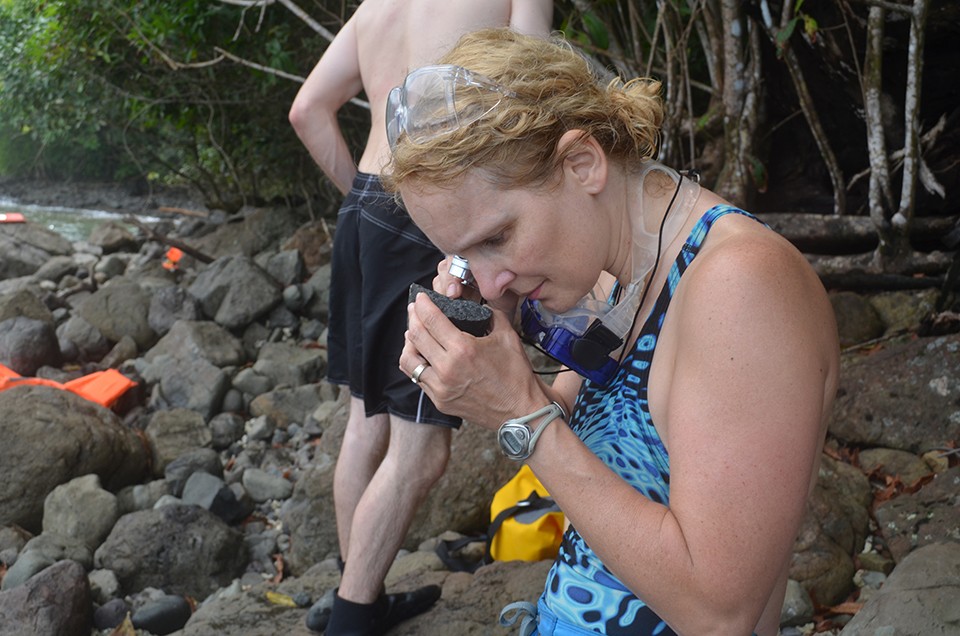 Class inspects a split-off chunk. It turns out to be a perfect specimen. 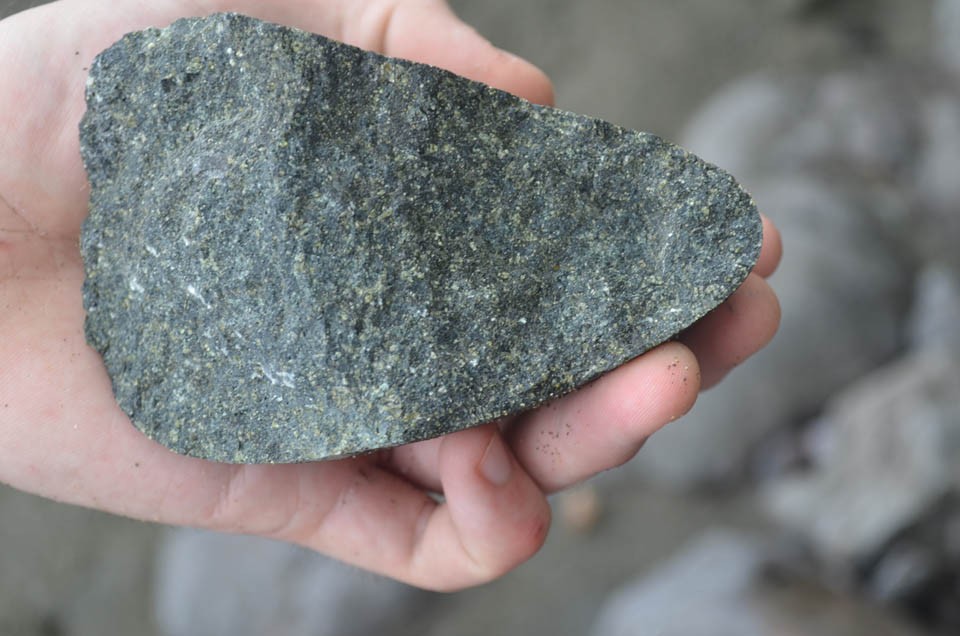 Greenish-yellow crystals of the mineral olivine are a hallmark of igneous rocks from the deep earth. Later chemical analyses done in the lab at Lamont will help reveal the circumstances of the rocksâ formation. 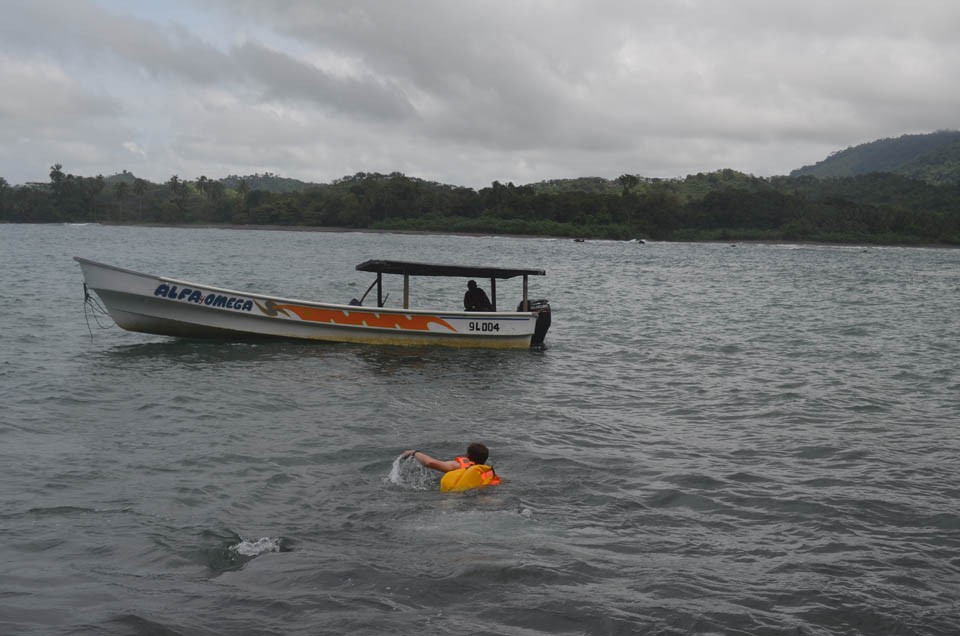 Swimming back to the boatâthis time weighted down not only by the tools, but a pile of samples. 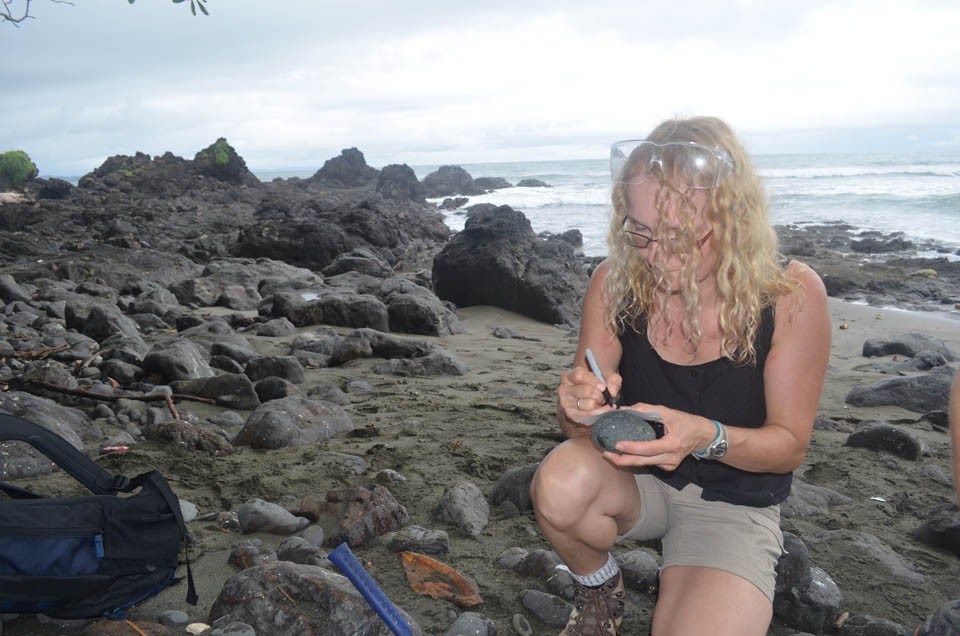 The team makes many such stops, collecting samples over a wide area. Careful mapping of locations and plotting of the chemistry should reveal new findings about both deep-earth processes, and how they have affected this region over millions of years. 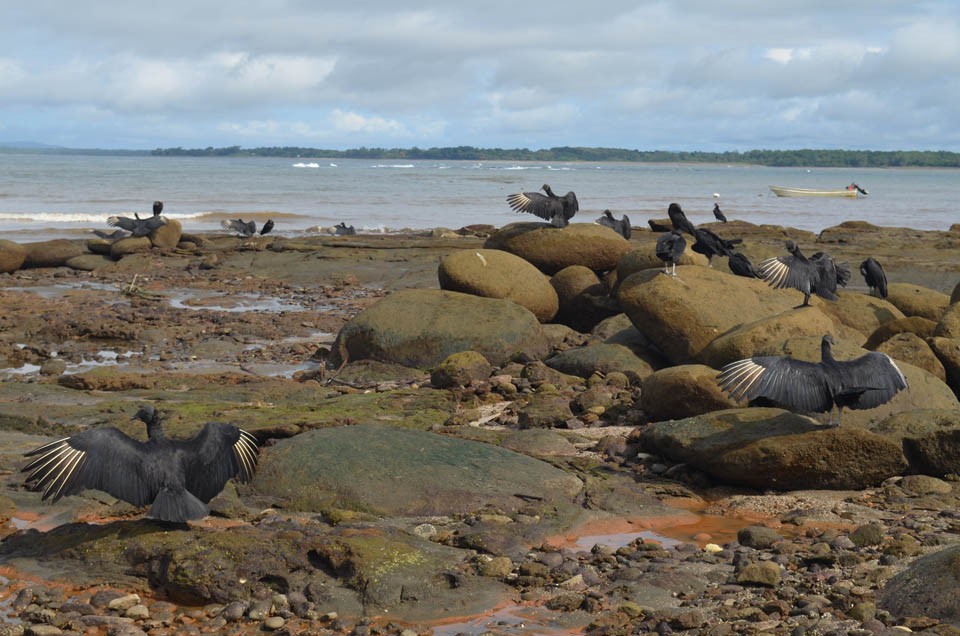 Geology is deeply connected to biology. Formation of the isthmus allowed flora and fauna from South and North America to mix, and formed a rich corridor for current wildlife migrations. At a local fishing harbor, vultures hang out at low tide. 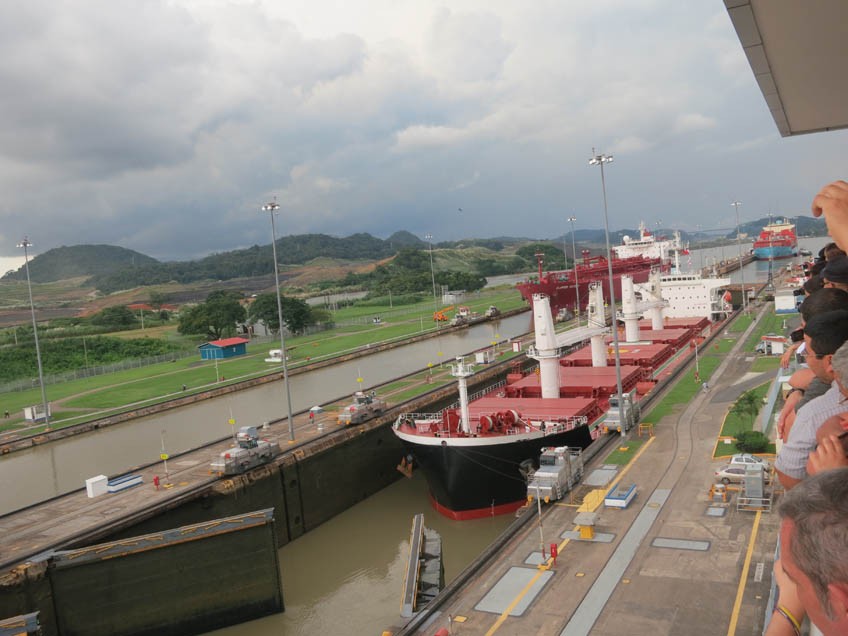 The narrowest point between the Pacific and Atlantic oceans, the isthmus is now split artificially by the Panama Canalânot only a major shipping route, but a big tourist attraction, at the Miraflores Locks Visitor Center. The canal was a boon fo 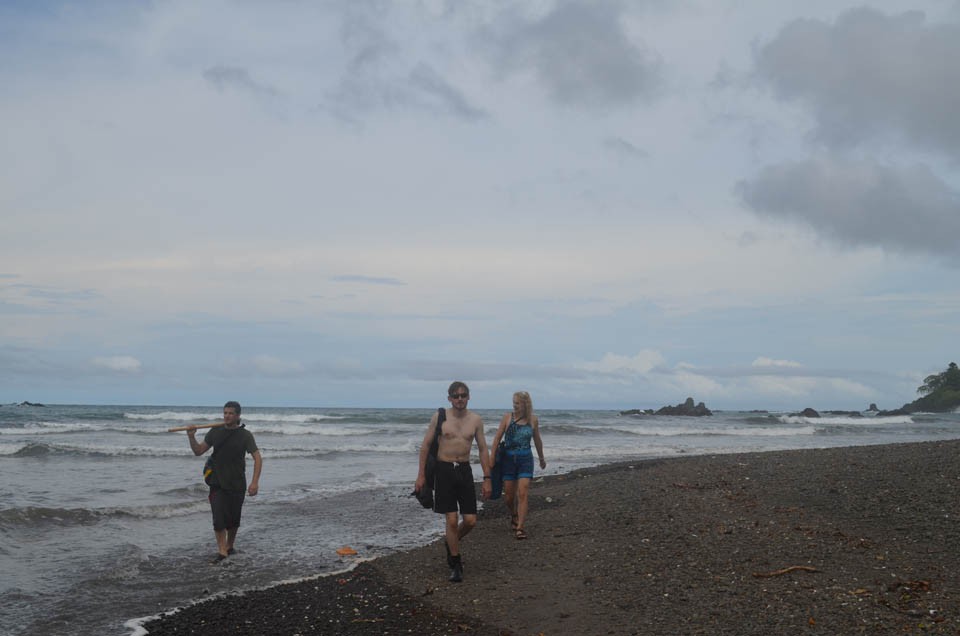 For now, the team prefers working on the Azuero coast, and intends to return. It has the kind of rocks they are looking for. And, says Gazel, âit has nature all around.â

The formation of the slender land bridgeÂ that joinsÂ South America and North America was a pivotal event in earth’s history. At its narrowest along theÂ isthmus of Panama, it changed not just the world map, but the circulation of oceans, the course of biologic evolution, and global climate. Cornelia Class, a geochemist at Columbia University’s Lamont-Doherty Earth Observatory, and Esteban Gazel, aÂ LamontÂ adjunct researcher now based at Virginia Tech, are looking into a keyÂ factor: the GalÃ¡pagos Plume. This is a long-lived upwelling of super-hot magma fromÂ the deep earthÂ that has formed strings ofÂ volcanoes that later became part of the land bridge. They recently spent a week on western Panama’s remote Azuero peninsula collecting rocks produced by the plume millions of years ago.Â What they are finding sheds light not only the geologic history of Central America, but the processes of the deep earth.