Photo Essay: Unearthing the Lost World Below a Petrified Forest 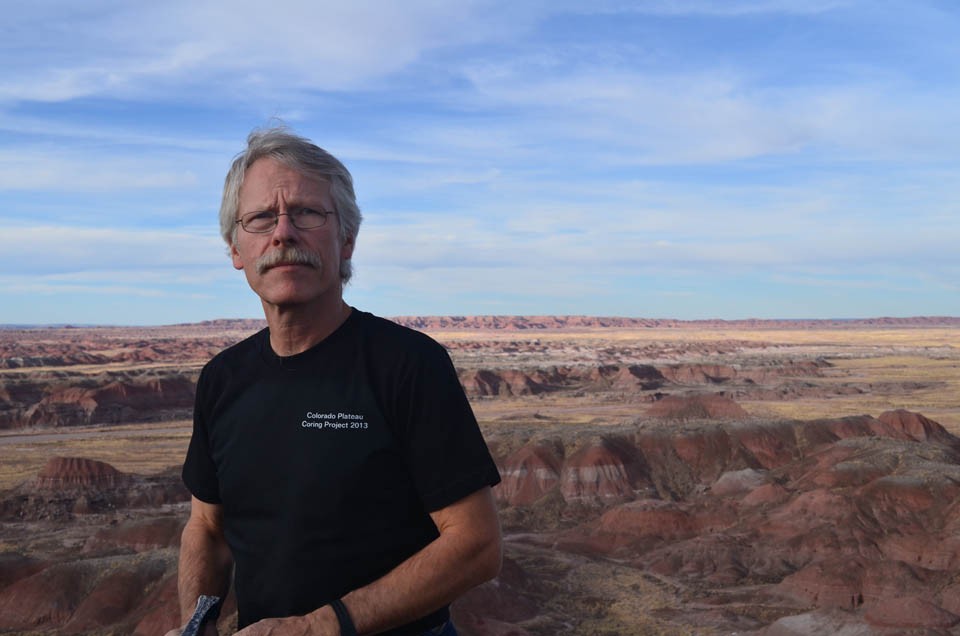 Paleontologist Paul Olsen of Lamont-Doherty Earth Observatory is co-leading a project in Arizona's Petrified Forest National Park to drill deep into rocks dating back more than 200 million years. Some sections lie exposed behind him in the badlands o 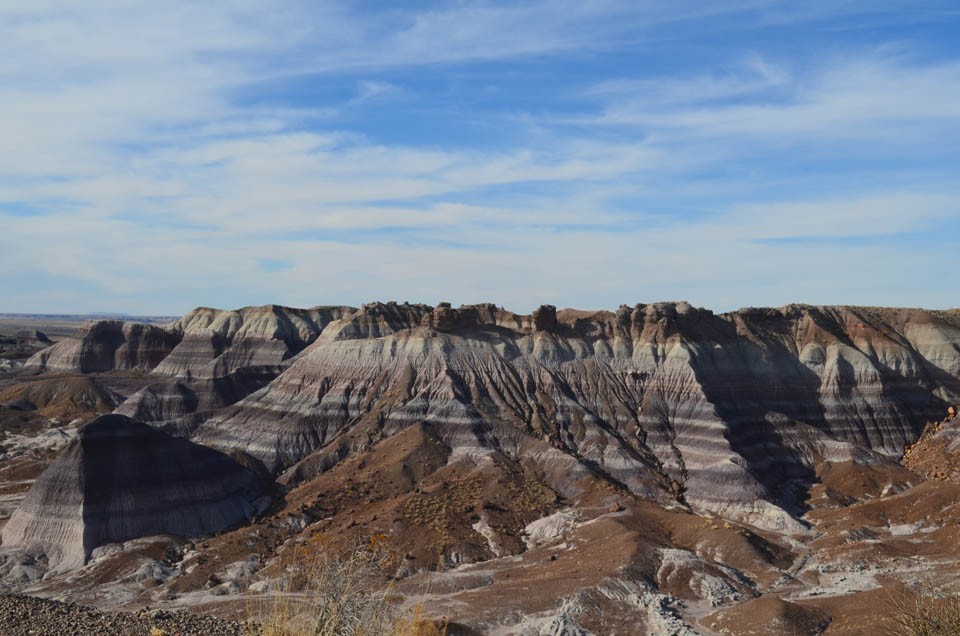 The landscape at various times consisted of shallow seas, rivers and swamps. Repeating bands of color may represent climate shifts caused by cyclic changes in earth's orbit, or other factors such as tectonic movements. Within these rocks lie what may 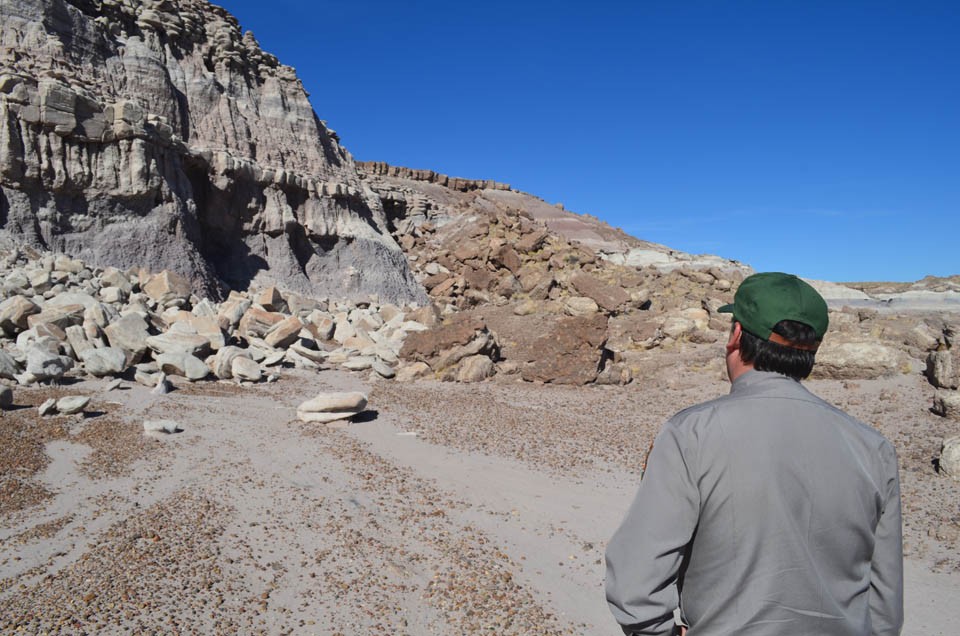 Despite all the easily visible geology, many formations have been disarranged by uneven erosion. This makes it hard for scientists to write a cohesive history of the time. By taking out a continuous record from one or more spots, the coring project i 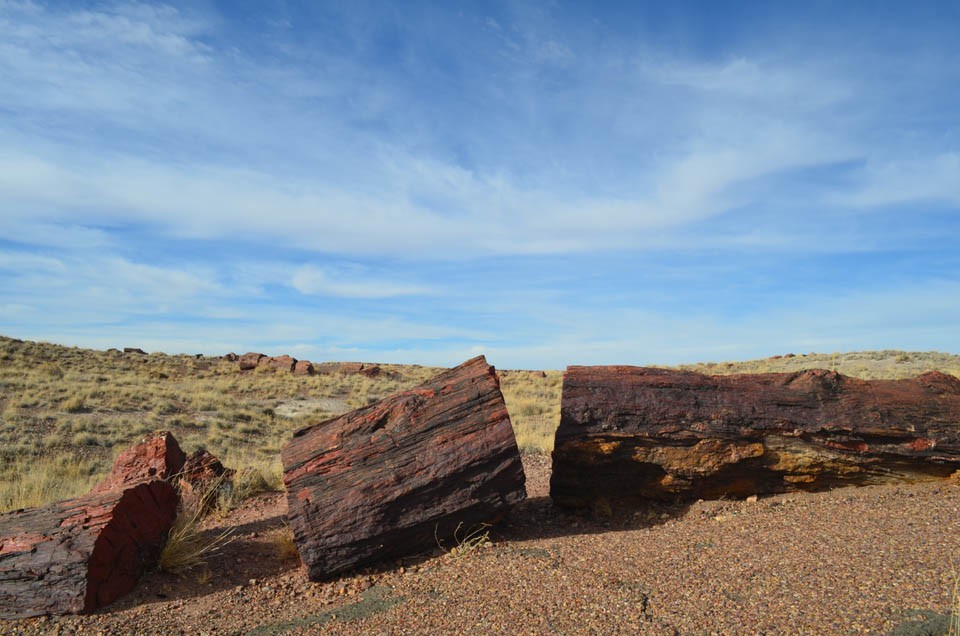 The most obvious fossils are the petrified trees, scattered over the park by the thousands. This one measures about three feet in diameter and once stood maybe 70 or 80 feet high, probably near the banks of a river. The wood itself, from roughly 217 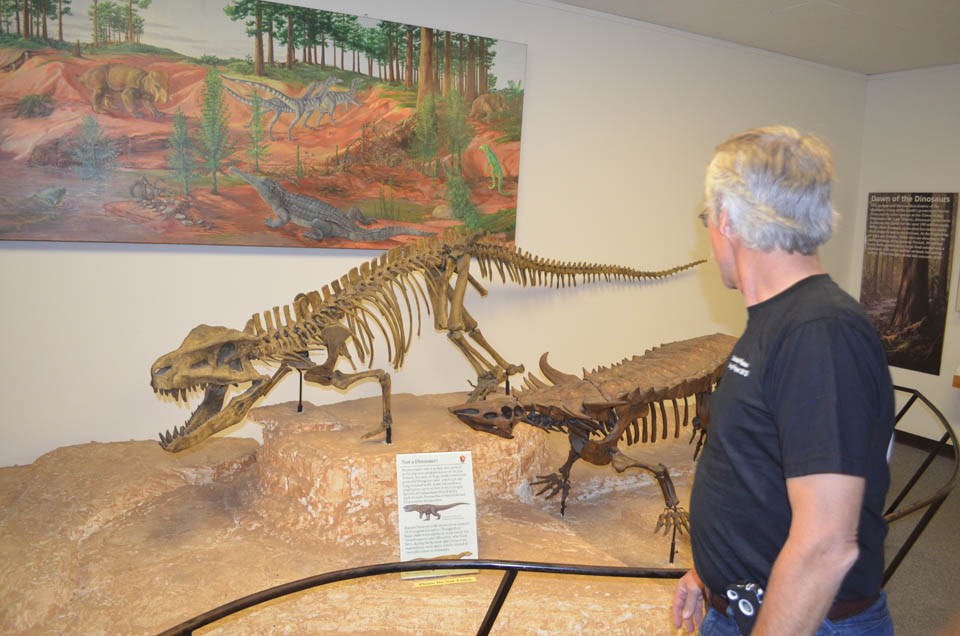 During the Triassic, dinosaurs were just a minor group, and most were quite small. The dominant creatures in this area were crocodilians and other fearsome reptiles, like these ones dug up and reassembled in the park museum. A painting at rear attemp 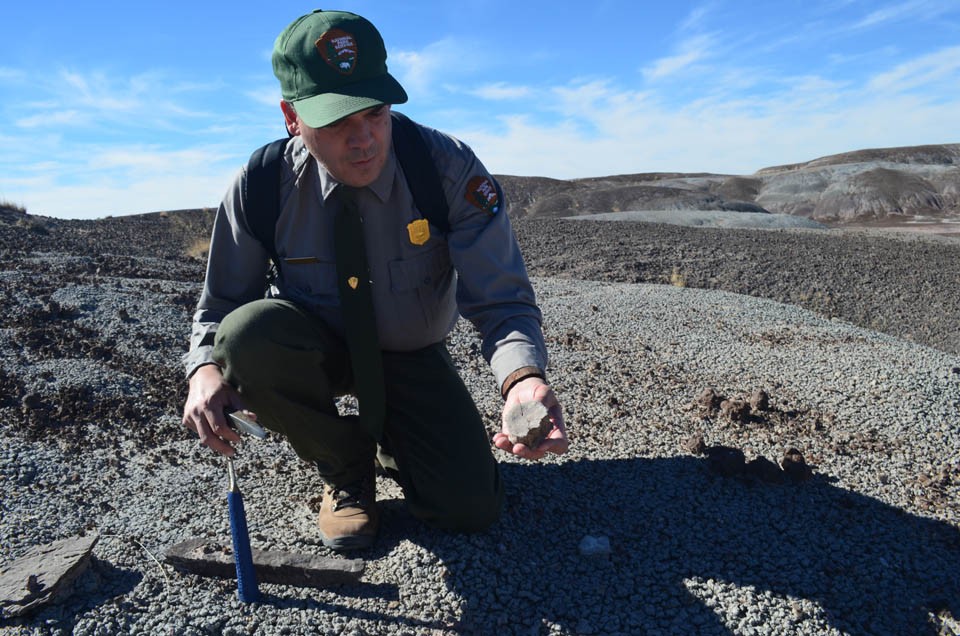 Park paleontologist Bill Parker picks up a fossilized vertebra from a reptile that probably lived in a shallow pond or swamp. Nearby, he and colleagues have unearthed skeletons of the giant reptilian Revueltosaurus-- a crocodile-like creatur 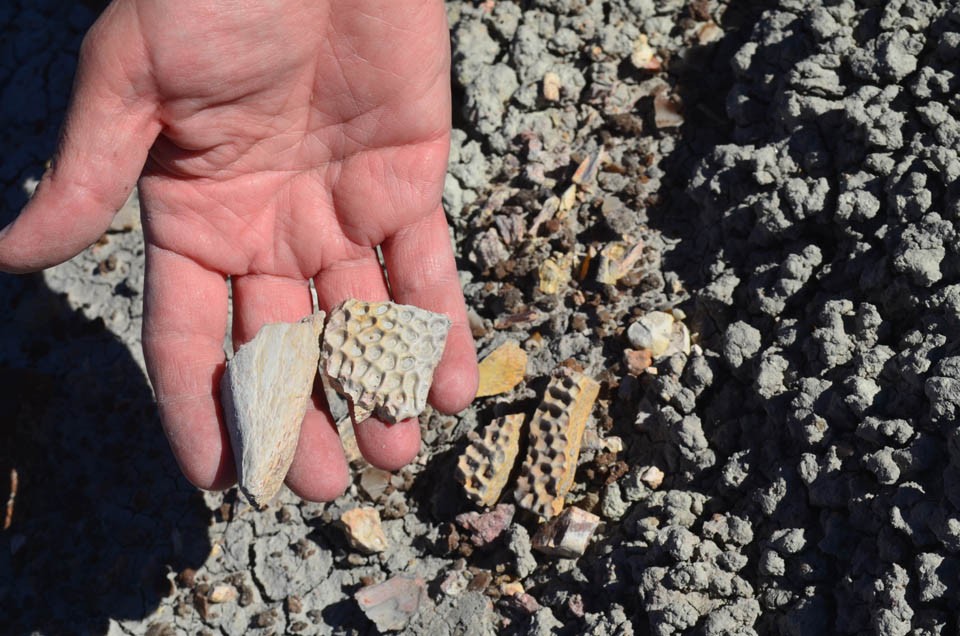 In backcountry places known only to Parker and colleagues, fossils of every description are lying right on the surface, eroded from decaying rocks. Here, skull fragments and a tooth, perhaps from a phytosaur, another reptile once common here; more fr 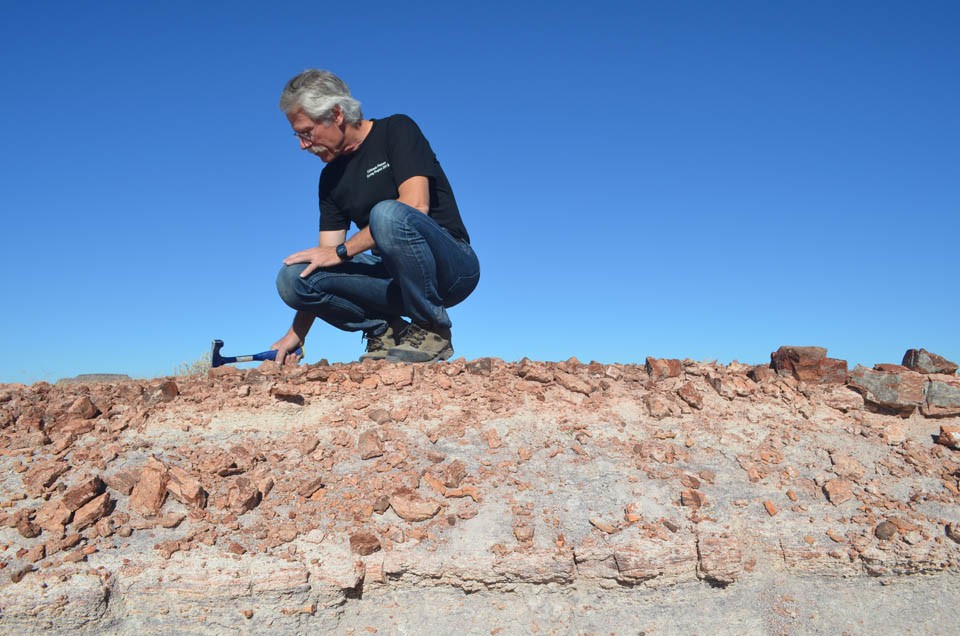 One goal in the coring project is exact dating of the wavy band of rock about three feet below Olsen, a few inches thick, marking the break between reddish rocks above and whitish ones below. Composed of tangled, cylindrical strands that could be tre 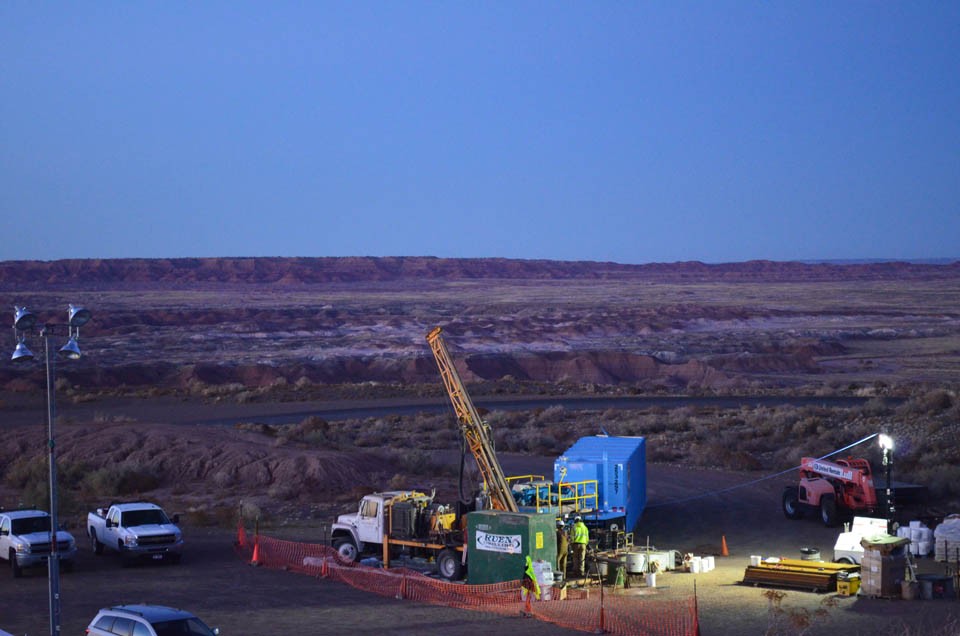 The team's drill--here seen at sunset--has been planted at the edge of a butte. The crew runs it in shifts 24 hours a day. The monthlong drilling is supervised by a consortium of scientists from different universities, and funded by the National Scie 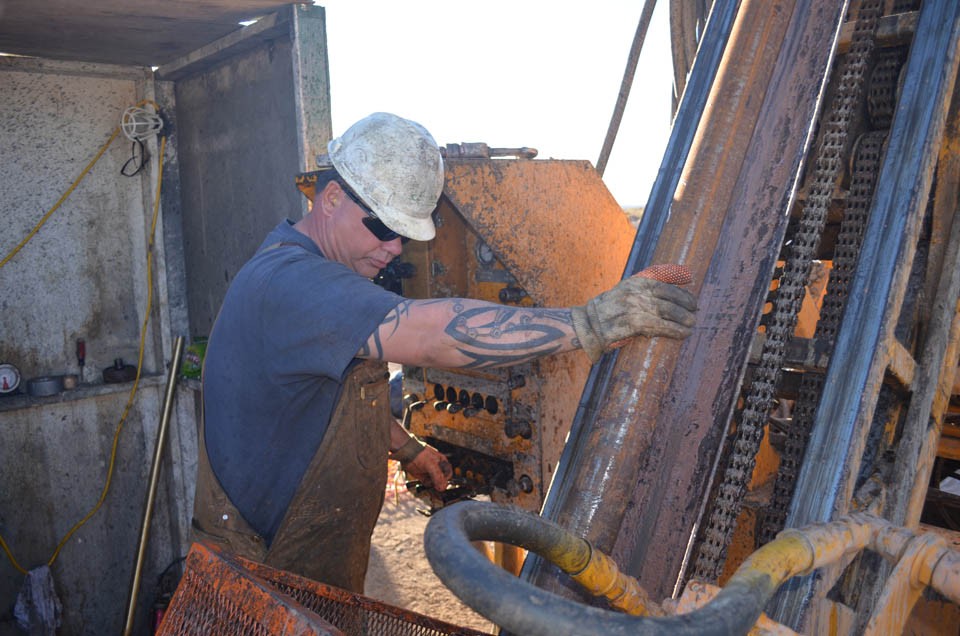 Driller Laurence Hill adjusts a pipe in the middle of his 12-hour shift. With a bit that whirls at 1,000 revolutions per minute and tons of heavy equipment driving it, his is a highly specialized and sometimes dangerous job. 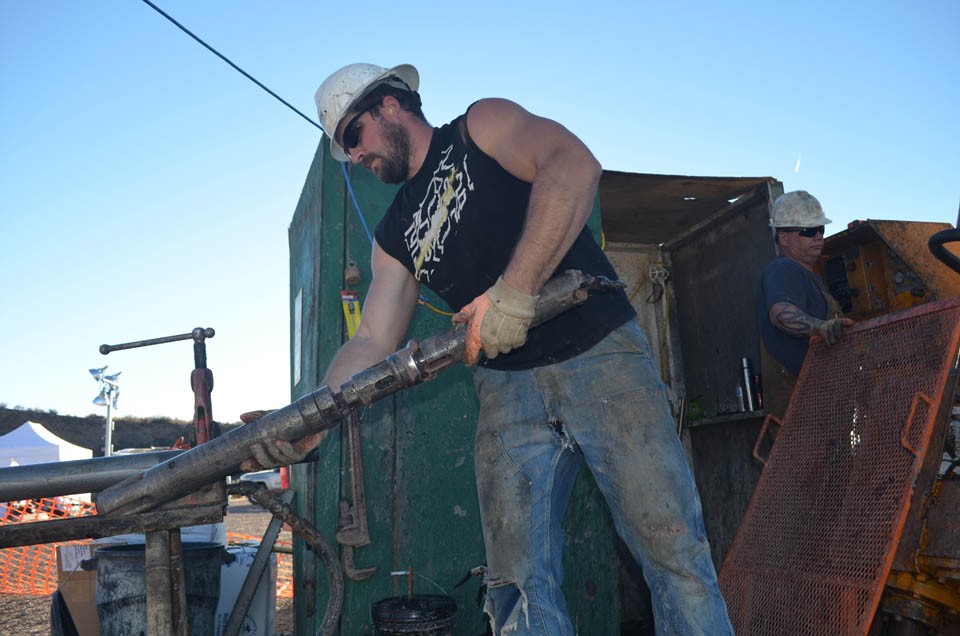 Five-foot cores are hauled up about every 20 minutes in hollow tubes. Driller A.J. Chubb removes the coupling from the latest one. 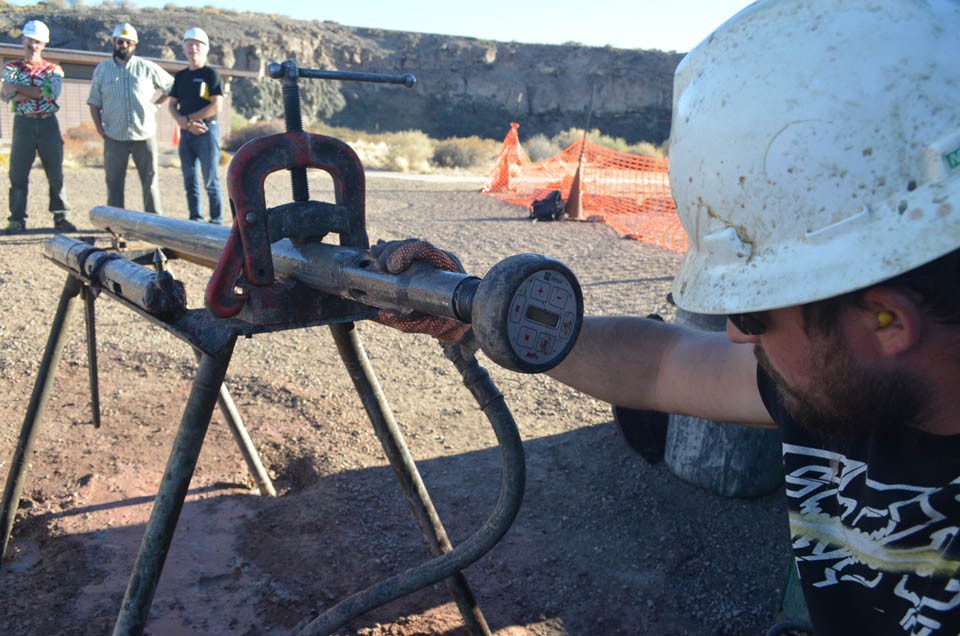 Before the core is removed, Chubb carefully rotates it and marks its end, so that the scientists in the background will know its original orientation in the ground. 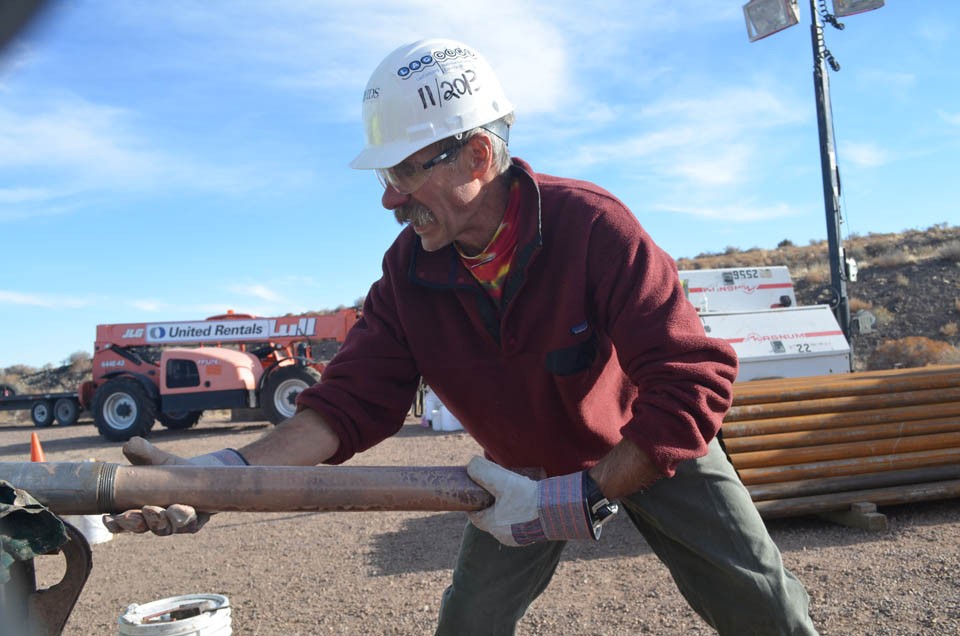 Project co-leader John Geissman of the University of Texas, Dallas, muscles a core out of the pipe. He will carry to a nearby tent for processing. 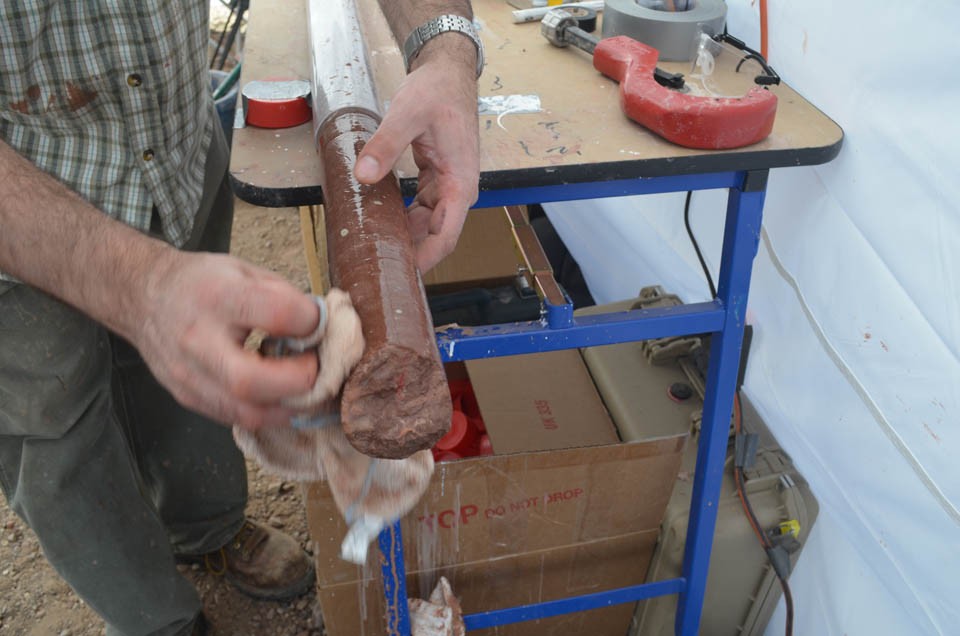 The cores come in many colors and consistencies. This one came from part of the Chinle Formation--a series of rock layers visible not only in Petrified Forest, but which form some of the most iconic landscapes of the American West. 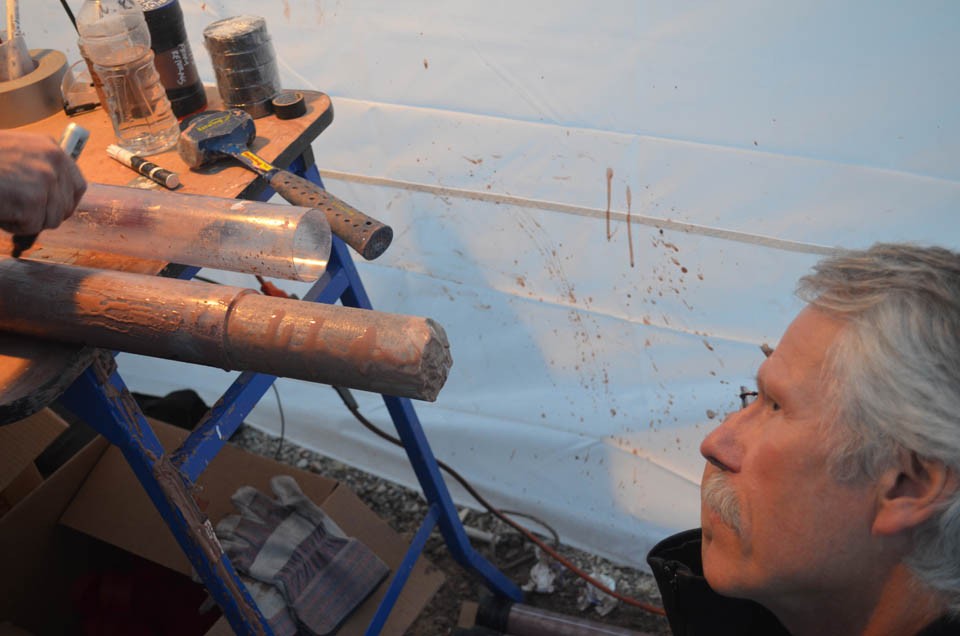 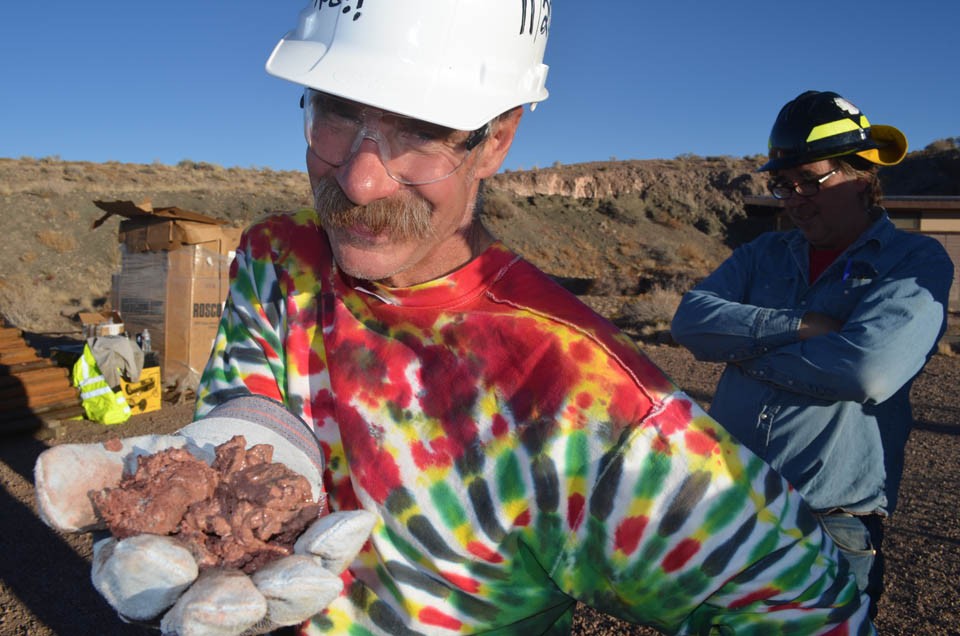 With a delight that perhaps only a geologist can evince for a handful of mud, Geissman presents debris from the borehole. The bright colors in the rocks come from chemical reactions involving iron and other elements. (The tie-dyed colors in Geissman' 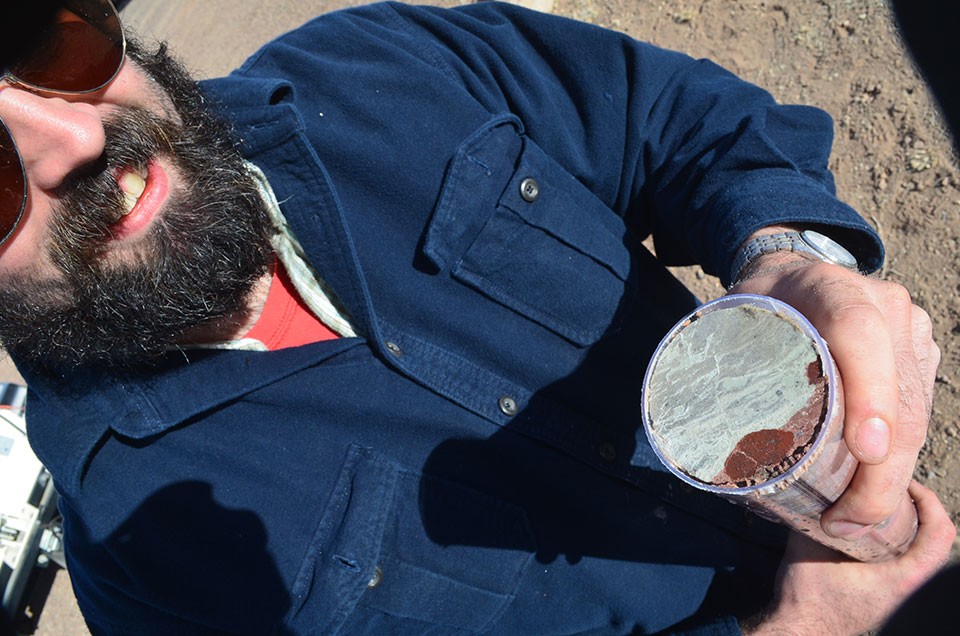 Geologist Morgan Schaller of Rutgers University shows off an unusual layer of greyish carbonate. Such layers may indicate sudden changes in the surface or the atmosphere, and give clues about climate shifts or other factors that affected living creat 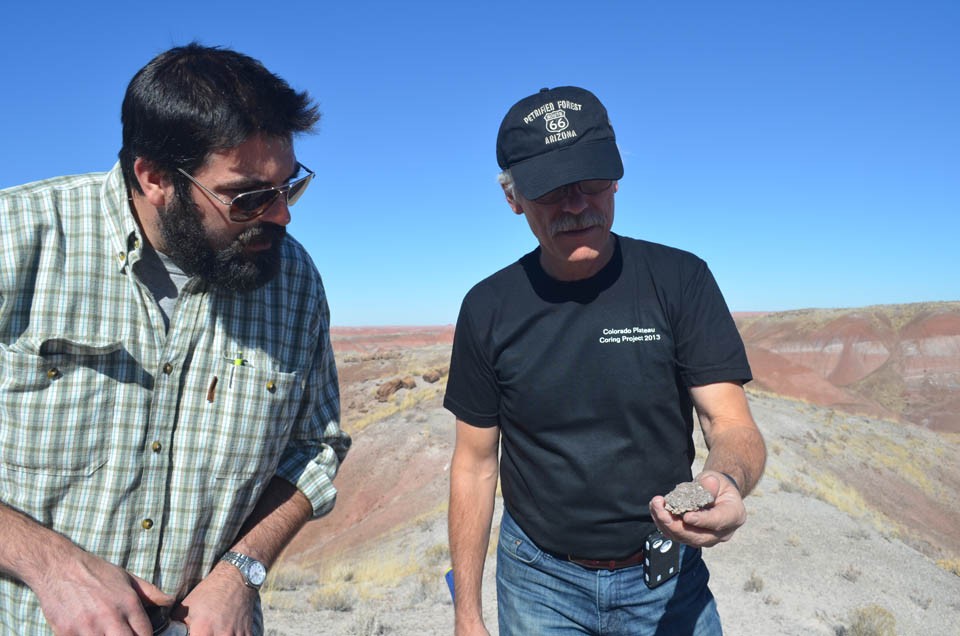 Schaller and Olsen discuss a rock found on the surface near the drill site. Even with all the technology at hand, old-fashioned shoe leather and a geologist's hammer are still indispensable for figuring things out. 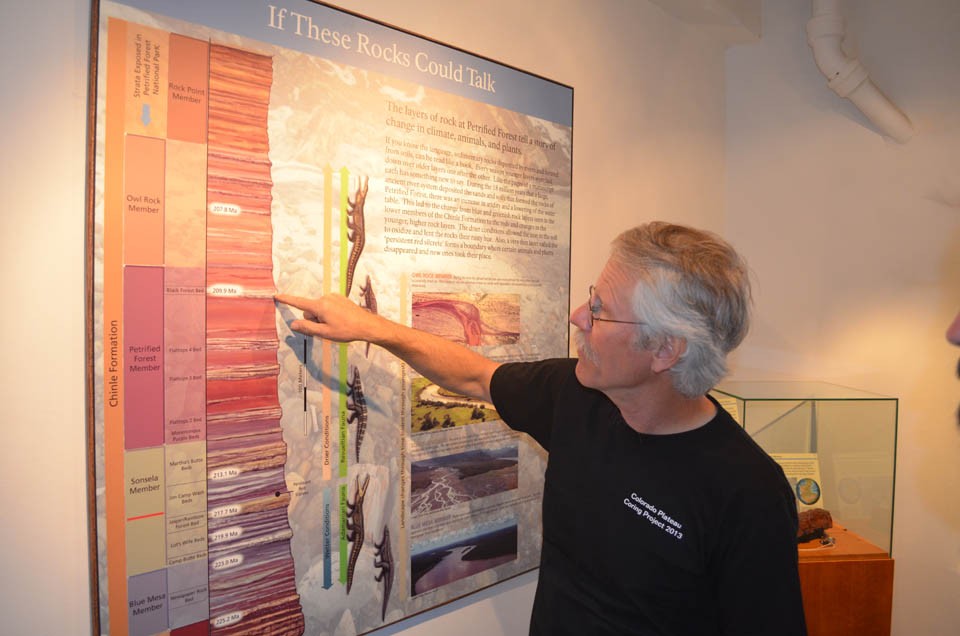 Scientists have been digging in this area since the 1850s, but many questions remain. Olsen examines a timeline in the park museum, but points out that many of the dates on it may be only educated guesses. 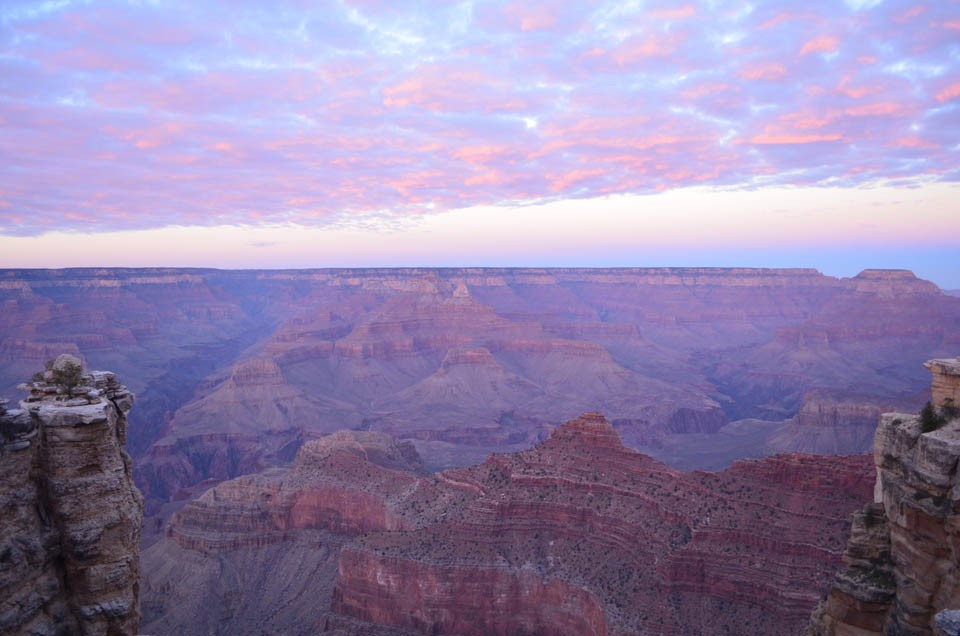 Many of the rock formations seen at Petrified Forest extend far beyond, through the Four Corners region of Arizona, Colorado, Utah and New Mexico. Some show up at the Grand Canyon, seen here at sunset. The Petrified Forest core--the first of a half-d 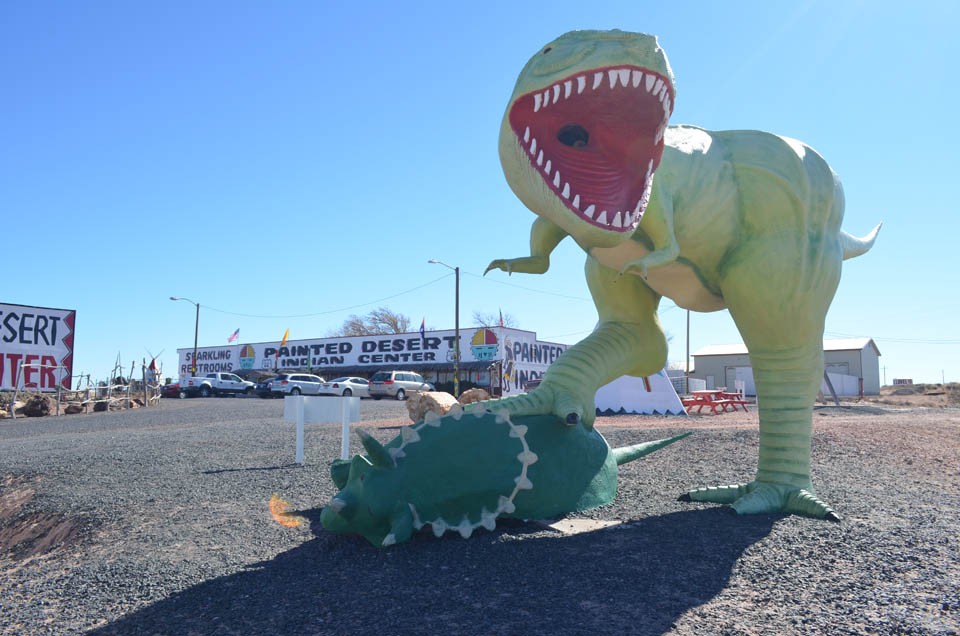 Dinosaurs rule the earth again, at a roadside stop near Petrified Forest. Fossils of these ones--evidently modeled on the carnivorous Tyrannosaurus Rex and the herbivorous Triceratops--have never been found around here. But they do 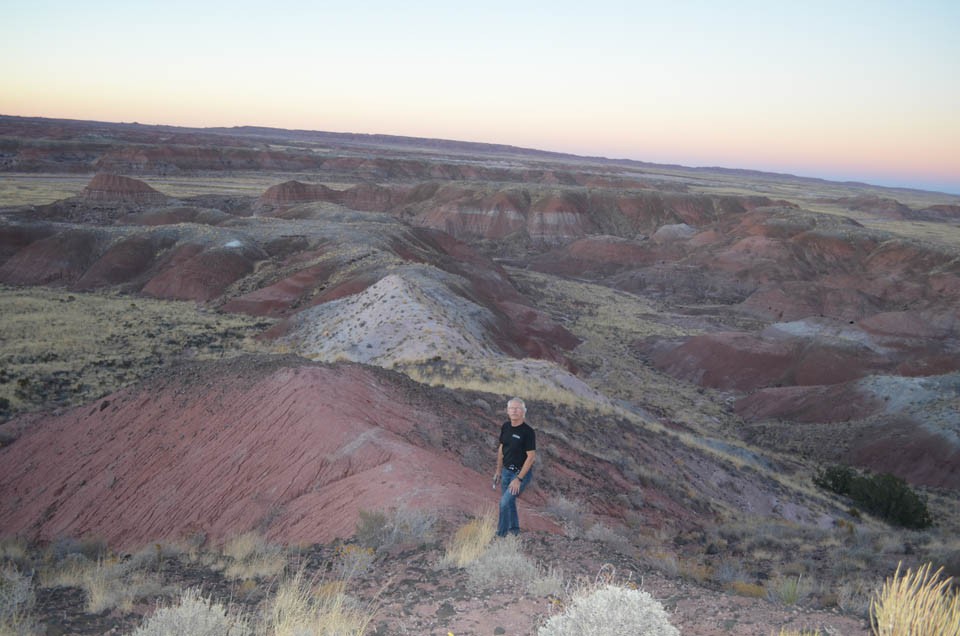 The remains of the Triassic are "interesting because [they give] us a different kind of world to look at, to try and understand how earth's systems work," says Olsen. "But it's not so different that it's beyond the boundaries of what we see going on

In Arizona’s Petrified Forest National Park, researchers are scouring the fossil-rich surface and drilling deep into ancient rocks to learn more about what happened during the late Triassic,Â some 201 million to 235 million years ago. It was aÂ time whenÂ the world underwent repeated climate shifts and catastrophic mass extinctions, and both early dinosaurs andÂ mammalsÂ evolved. What the researchers learn here may not only allow them to write a precise chronology of the period, but shed light onÂ wider questions including how climate swings work, and how they affect ecosystems. READ THE FULL SCIENTIFIC STORY or SEE A VIDEO